Zen and the art of fashion design 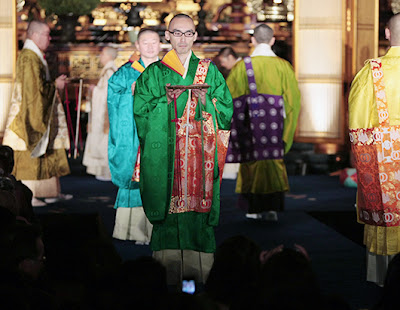 At last, a religion has found a way to attract publicity without threatening to murder infidels or descending into interminable squabbles about sexuality.

Step forward Japanese Buddhists. Faced with declining congregations - young Japanese, it seems, are too busy playing with their pet robots to seek enlightenment in the precincts of a temple - monks and nuns from eight different Buddhist orders have put on a fashion show, parading in their robes up and down a catwalk specially constructed inside the historic Tsukiji Honganji temple yesterday.

The Tokyo event, which must surely have been organised by Edina Monsoon, attracted praise and bemusement in equal measure. "We wanted to show the young people that Buddhism is cool, and temples are not a place just for funerals," said Koji Matsubara, a chief monk at Tsukiji. According to another of the organisers, Kosuke Kikkawa, "We won't change Buddha's teachings, but perhaps we need a different presentation that can touch the feelings of the people today."