A Letter to the Philippians 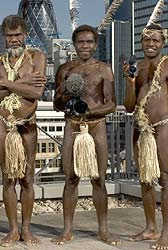 If the pre-broadcast publicity was to be believed (and, OK, I suppose it probably wasn't) then some anthropologists were unsettled by the prospect of bringing a group of Vanuatan islanders into the presence of their living God as part of the series "Meet the Natives", the final episode of which was broadcast last Thursday on Channel 4. One stray word from the notoriously gaffe-prone Duke of Edinburgh, it was apparently feared, might "destroy a unique culture".

They needn't have worried. All the evidence suggests that Prince Philip very much enjoys being the centre of a cult (and, given the coverage he often receives in the British press, it's difficult to blame him). The official Buckingham Palace website lists the devotion of the Kastam tribe of Tanna as one of "50 facts" about the Queen's husband, along with his naval service in World War II and his work with the Duke of Edinburgh's Award Scheme. Over the years since the existence of the "Prince Philip Movement" was brought to his attention, the prince has dispatched gifts to his devout followers: if not the cornucopia of cargo and everlasting bliss their prophets have foretold, then at least letters, a box of cigars, a union jack and a number of official photographs, in one of which the duke is posed clutching the sacred nalnal stick which symbolises his sacred status. (Although he declined to wear the traditional penis-sheath.) 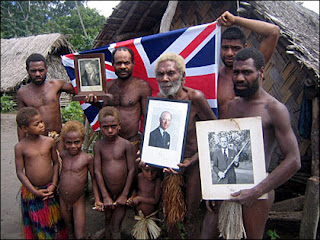 So while the programme makers sought to tantalise us with a series of will-they-or-won't-they cliff-hangers, there was probably never much doubt that the prince would accede to the islanders' request for an audience. And thus it proved. The five Tannan men of the party, wearing shiny new suits oddly reminiscent of those issued by President Ahmadinejad's people to the captured British sailors (presumably the penis-sheafs were deemed inappropriate) were ushered through various grand reception chambers at Windsor Castle to a private meeting with their Messiah. After presenting him with some more carved sticks, they posed him a riddle about a paw-paw. And he answered them with another riddle about the weather.

Back on Tanna, the five are greeted like returning heroes and deliver their message. "He has grown old", says the wizened chief Jack Naiva, Philip's high priest, wearily, looking at the latest photograph. He has grown even older waiting for his Messiah's second coming (Philip first visited the island in 1974).

On one level, of course, all this is extremely amusing. And there's little doubt that the programme's makers, for all their lofty-sounding aspirations about challenging cultural assumptions, largely played it for laughs. But wherein lies the humour? The natives' presumed innocence and naievety, their holding on to a bizarre belief? Or is it merely the incongruity of it all? This black tribe's reverence towards a man whom we know best for his irascibility, his unselfconscious rudeness, and his many borderline-racist "quips". This deeply felt belief, which we know to be untrue, that he is a god.

The villagers' Philip Cult, a mish-mash of local animistic beliefs about a volcano-god, half-understood stories learned from missionaries about Jesus' second coming, and beliefs about the coming distribution of "Cargo" otherwise attributed to the mythical American "John Frum", may seem ridiculous. But is it any more ridiculous than other, more established, religions? Is it any more ludicrous than the belief of the Rastafarians that Haile Selassie was a god? Like Philip, Selassie (an Orthodox Christian) was more than happy to humour his devotees during his lifetime, with the result that many today believe he never died at all. Perhaps such a legend will attach itself, in time, to Philip, as it attached itself to Elvis Presley, to King Arthur, or to Jesus.

The Philip Cult merely exists at one end of a spectrum of respectability at the other extreme of which lie the "great religions". While the high priest of Philip squats, half-naked, in a hut of straw, the Pontifex Maximus of Rome sits enthroned in splendour and expects (if he doesn't always receive) the obedience of more than a billion followers. Meanwhile the Prophet of a rival faith is accorded such honour (born as much of timorousness as of respect) that it is increasingly difficult to criticise him. No such taboo yet surrounds the persons of L. Ron Hubbard or even Joseph Smith, founder of the Chuch of Latter Day Saints. But, especially in the USA, the Mormons - in spite of their highly questionable origins - have long ceased to be an eccentric sect and are on the cusp of acquiring the full status of a "great faith".

Besides, what about the islanders' beliefs is really so outlandish? Prince Philip does, after all, live like a god, surrounded by attendants and protected by ritual and taboo from contact with the reality of life. The islanders of Tanna, used to conditions of extreme privation such as are experienced by Westerners only when they volunteer to take part in reality TV, might well, when introduced to the splendours of Windsor, have experienced emotions comparable to those felt by the first Russian emissaries to Byzantium in Hagia Sophia: "We knew not whether we were on earth or in Heaven." And, unlike followers of Mr J. H. Christ, the Philippians can actually see and touch their God.

It is recorded in the Gospels, that when Simon Peter asked Jesus if he was the Messiah, he replied with a riddle: "And you, who do you say that I am?" Philip gave his followers a similarly riddling response. Should he have owned up, replied in that famously blunt manner of his, "No of course not you damn fools. Don't be so bloody ridiculous"? Did he not owe it it truth, to his own integrity, to put them straight? Or would that have been an act of wanton destruction, a crime against anthropology? We mustn't be judgemental about other cultures, must we?

I am not sure that the philippian cargo culters deserve the sniggers of derision. They seem to have resisted the encroachment of christianity, which is as much a silly mishmash of various incredible stories, and held on to their traditions - polygamy, kava and narcotics (sounds like a party culture!) quite cunningly and as rationally as can be expected, given their isolation.

What they expect from their god, as expressed by the chief priest, is wholly practical too : a landrover, some sacks of rice and a little money... beats eternal salvation and the 72 ever-virgin houris anyday!
15 October 2007 at 18:45