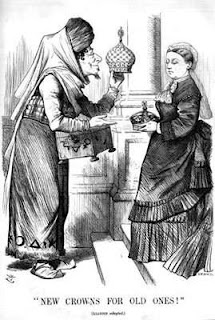 Here's a famous cartoon, and about as hard-hitting as it got in the notoriously genteel world of Victorian caricature. By John Tenniel, it depicts Benjamin Disraeli as an oriental peddlar, of the type who sold Aladdin his magic lamp, presenting Victoria with the crown of India. She was now, you see, officially an empress, a promotion that more serious-minded thinkers and politicians (such as Gladstone) thought a piece of empty theatricality. It plays on Disraeli's image as a showman, as a slightly overdressed and mildly camp poseur, but most particularly as someone who is not entirely English. If it were published today, Punch would probably have faced accusations of anti-semitism.

The image nails Disraeli, though, just as Steve Bell's famous drawing of John Major wearing Y-fronts outside his trousers nailed him, and did for his government almost as fatally as Black Wednesday or all those allegations of sleaze. Similarly, Spitting Image's portrayal of David Steel as a homunculus peeking out of David Owen's pocket ruined the electoral prospects of the Liberal/ SDP alliance in the 1980s. Yet the same show's vision of a pin-stripe suited Margaret Thatcher dismissing her cabinet as "vegetables" did her no harm at all. All these pictures and sketches told a truth. It's hard to think of an equivalent summation of Tony Blair. No cartoonist really got him. He was too paradoxical: a perpetually grinning, effortlessly charming war criminal, he didn't quite compute. Private Eye's evocation of the Vicar of St Albion's came closest, at least in the early years; the flaw was that, in the end, it was too affectionate. Really effective caricatures have some element of real venom.

So what about Cartoongate, or NewYorkergate, or whatever they decide to call it? While the cartoonist Barry Blitt's intentions were obvious - drawing attention to the absurdity of many of the "smears" against Barack Obama and his wife - the loudly-expressed outrage by both the Obama campaign and many of his supporters in the press and elsewhere suggests that the picture raises real fears. Real fears in the Obama camp, and real fears in the minds of some voters. 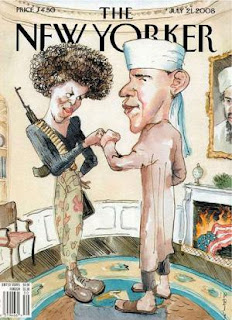 The cartoon was was immediately denounced by an Obama spokesman as "tasteless and offensive", which is also a slightly ambiguous formulation. What they are really worried about, of course, is that there are voters out there who are moronic enough to take it seriously, who believe the stuff about Obama being secretly a Muslim (he is, in fact, like many presidents, secretly an agnostic) or being somehow "anti-American". No doubt they think that there are a lot of morons out there; it's an easy to form impression given some of the stuff out there in the cyberverse (or, indeed, on Fox TV). One of the most astute comments on the affair, and one of the earliest, was from Andrew Malcolm in the LA Times: "politicians don't like satire because it's subject to differing interpretations." To the well-heeled, impeccably liberal readership of the New Yorker, Blitt's intention may not be in doubt. But to minds front-loaded with any of the Rumours, it kind of makes sense. It chimes.

This is, after all, a man who has been photographed wearing traditional (and in some sense "Islamic") African dress, who was brought up abroad, and who began his campaign with talk, soon dropped, of undertaking "unconditional" discussions with the Iranians. His wife's dress sense may owe more to Jacquie Kennedy than Foxxy Cleopatra from Goldmember, but she certainly has "attitude", something which has made her at times seem uncomfortably testy. More importantly, the whole thrust on the McCain campaign appears to be one of national security. He hasn't, so far, offered any solutions to America's financial or social problems, but he presents himself as a grizzled all-American war hero who will be Strong and take on the country's enemies (who are also, of course, the Enemies of Freedom). So creating the impression in the public mind (or in parts of it at least) that there's something not quite patriotic about Barack Obama is pretty much the only chance he has.

Drawing attention to the cartoon is a high-risk strategy for the Obama campaign, precisely because it turns it into such a big story, and ensures that everyone, but everyone, will have seen it. Even if the story becomes one of a sophisticated joke gone slightly awry, the image won't go away. It has the power to summon up other, real images: Obama in a turban, Michelle doing the "terrorist fist jab". Directly, it refers to the smears, which the vast majority of Americans know to be rubbish. Indirectly, it reinforces the mainstream Republican narrative which draws more subtly upon those smears. For Barack Obama is an exotic. It is part of his appeal - especially to non-Americans, of course, who can't vote. It enables him to transcend traditional barriers of race, class, or denomination. But it also creates in some Americans a sense of unease. It's not a question of race (or indeed religion); rather, it is one of "otherness".

Forget Michelle's afro, or the portrait of Osama (what a difference a letter makes...) or the flag burning merrily in the fireplace. They don't work. But Barack in the turban and robe, like the Victorian image of a turbanned Disraeli, hits the mark. Barry Blitt may not have wanted to hurt Obama, but it's possible that he has nevertheless found the caricature that will define him.
Email Post
Labels: Obama US election

WeepingCross said…
Hurrah for Dizzy. It contributes nothing to the debate, I just wanted to say it.
15 July 2008 at 20:28

Anonymous said…
Cif has banned you Waltz? How dare they? I took the Guardian to the PCC over a Xmas Eve blog by one Masroor which described Roman Catholicism as suited to paedophiles (among other slavering idiocies) and when the PCC decided the Guardian hadn't broken any of its weird rules I banned Cif from my mac and only went back cos of guys like you, Sarka, Olching and of course Heresiarch (thank goodness for Heresy Corner).

I'm on the verge of dumping them again - the new Cif is a drag, a drag, and the current Martin Bright thread shows signs of terminal Cif blah Islam blah decay. Should we dissidents all form a Cif in Exile?

Was going to comment on your Obama piece Heresiarch but too annoyed now. I think you're right the cartoon may define him eventually.

Er, I'd stake a few quid that it is. And I'm not at all sure that 'the vast majority' of Americans know the smears are untrue. Check out this piece at Clive Davis' Spectator blog.

I think Davis makes a good point - that so many people now get their info from anonymous (and often loopy) Internet sources that denials in the mainstream media mean nothing.
16 July 2008 at 08:40

Heresiarch said…
Waltz, if you're reading this, I hope you find a way back to Cif. Echo what Edwin says, of course. I'm thinking of coming out "in sympathy", as t'brothers used to say. Unless you've been banned before, they might let you back in a week or so's time. Until you do, there's always a place for you here. Not quite the same, I know. But I'd like to carry on reading your pithy thoughts. Just because you agree with me, it doesn't mean you can't comment.
16 July 2008 at 08:56

Anonymous said…
'It's not a question of race (or indeed religion); rather, it is one of "otherness".

Valdemar disagrees. I don't disagree, but it is a complex area. Compare Catholics in Scotland. I've known an English RC Tory be spat at in Glasgow by one of his fellow local Tories. That was in the 70s (when the SNP was also often uneasy about Catholics), but at the upper-class Ancram level there was (I gather) never any problem with the Tories and Papes - the troubles intensified as you sank down through the golf clubs, right down to the horror of Orange Larkhall.

In one Sopranos scene, a young black guy gets knocked off his bike by a bunch of young mafia goons who call him 'nigger' - he responds 'I am a Somali, not a nigger'. He still gets beaten up, but hs declaration that he has nothing of the slave about him does seem to count in America. It's much as if a young upper-class or English Catholic wearing some RC identifier were to be ambushed in darkest Lanarkshire - he would still be beaten up, but with less contempt!
16 July 2008 at 09:11

Anonymous said…
Yes, echo Heresiarch Waltz. Was chatting to SteveJones on Cif the other day and he had just been banned for two weeks. I guess it's temporary - the Martin Bright thread I mention above shows how much the big boys and girls are actually needed by the Guardian - and Queen Georgy and Bicycle Repair Man Seaton know this as well as anyone else.

Anonymous said…
Thanks Edwin and Heresiarch. I'm not sure if it's a permanent or temporary ban - no notification, I just can't comment there anymore. Maybe not such a bad thing though - I'm doing a final rewrite on a book at the mo so it will stop me procrastinating quite so much! I'm changing my ISP next month anyway so I might sneak back under another name then if the ban proves permanent ...
Meanwhile, I shall drop by here every now and again.

Anonymous said…
Heresiarch - ask her if she's using firefox. I bombarded the guardian with mails complaining (and later apologising) because I constantly received a message about 'commenting not available' for the whole weekend. Due to another problem, I asked the IT boys at work and they told me to clear out my cache. Then pbwiki helpdesk told me to 'hard refresh'. It worked for me...
16 July 2008 at 11:09

Anonymous said…
Waltz there are Cif guys (must be male guys!) who study new posters to find out if they're banned or fedup oldies come back - I was recently lamenting SkierGolfer's absence and someone popped up immediately to say 'he's over there!' The Cif gauleiters seem to leave them alone though, I suppose it must be a kind of online etiquette to do do.

I voted for you as commentator of the year, incidentally.

I find Cif invaluable for procastination (I too write for a meagre living - only 40 people in Scotland make a living just out of books and I am not one of them) but as I say I am increasingly fed up with Cif - it's becoming almost a chore to post there, and the 'join the debate' shout line is increasingly a bad joke.

Anyway, Heresy Corner is a good place to be, the blog is great, the company is good and the gab is both friendly and intelligent.
16 July 2008 at 11:22

Anonymous said…
Cif has gone to the dogs....two recent threads have made them look ridiculous (the Islamic creationist "debate" & Brooker's current wind-up)....both needed, but didn't get, de-trolling....