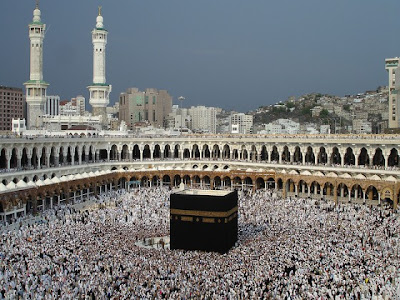 Is Tom Holland brave, foolhardy even, to have written a book about the origins of Islam?  Charles Moore seems to think so.  Reviewing  In The Shadow Of The Sword in the Telegraph, Moore calls it "a brave telling of the Koran’s human stories".  Previous reviews, writes Moore, have "skirted around the key point" which is that "much of what Muslims believe about the Koran is incorrect."  Holland, he intones ominously, "is being brave."

I don't think this sort of language is at all helpful.  It should not be considered "brave", in any respect except a purely literary one, for a historian to attempt an accessible account of a complex but pivotal period in history.

More to the point, the last thing we need is the idea getting around, among easily-offended believers who have not read the book (such people rarely if ever do) that Holland is being "bravely"iconoclastic, tackling taboo subject-matter or standing up to religious pressure.  Such prophecies can be self-fulfilling. "British historian defies death-threats" would make a good headline (it would, of course, be unworthy to imagine that that is what Moore wants to see) but it would scarcely advance historical awareness, mutual understanding or public debate.

There's altogether too much fear-induced self-censorship as it is.  Moore's tribute to Holland's "bravery", moreover, betrays his own prejudices about easily-aroused Muslim anger.  A lot of "respect" based oversensitivity actually does: it's assumed that Muslims will be become upset or murderously inflamed by something or other without any evidence that any actual offence has been, or would be, caused.

I went to hear Tom Holland talking about the book last week in Cambridge.  He admitted to having naively underestimated the sensitivities concerned when he first decided to tackle such a vast and contentious subject -- basically, the end of the ancient world and the origins of our own -- but there was nothing to suggest either that he feared for his life or that he had any reason to do so.  He made the very reasonable point that while all this may be sacred history to Muslims, who believe that the Koran was the direct word of God and Mohammed the pattern for all righteous lives, non-Muslims have the right and perhaps the duty to explore it historically.

I think this is important to assert.  However much Mohammed means to Muslims, as a figure of history rather than faith there can be no intellectual copyright on him, no no-go areas.  And Holland has no desire to be inflammatory.  Happily there have thus far been no reports of angry mobs setting light to his latest book.  It's most unlikely that he would get away with it were he a Muslim writing in a Muslim country, but it says a lot about the paranoid intellectual atmosphere of the moment that it could be thought that a non-Muslim writing in a non-Muslim country for a largely non-Muslim audience would be running a risk.

On to the substance, which was fascinating (there's a lot more in the book, but as a space-limited skinflint I'm waiting for the paperback).  Late Antiquity seldom gets the attention its importance deserves. It tends to get neglected in the rush to get to the Middle Ages (Goodbye Romans!  Hello Vikings!)   It seems too far away, too complicated (it gave us the metaphorical adjective "Byzantine", after all), too alien to modern sensibilities, perhaps just too historically diffuse.   It began with the establishment of Christianity as the dominant religion of Europe and the Mediterranean world, followed not long afterwards by the collapse of the Roman Empire in the West, and ended with the beginnings of the Middle East as we know it today.  Its most obvious legacy is religious, linguistic and cultural cleavage between Europe and Islam that has, over the centuries, flared up many times into violence but which has more often been characterised by mutual incomprehension, fascination and unease.

One of Tom Holland's aims is to question the assumption that the Arab conquest of North Africa and the Middle East represented a clean break with the past, instead looking at the underlying continuities.  The study of history often centres on the tension between continuity and change: it's easy to overstate either.  Obviously the changes wrought on the region by the coming of Islam were vast and dramatic.  But the change didn't come overnight (Egypt, for example, retained a Christian majority for another five hundred years); and incipient Islam itself owed much to currents of thought that were already present and gaining ground in Late Antiquity.  It did not come "like lightning from a clear blue sky" -- or from the remote wastes of Arabia, outside the main centres of East Mediterranean civilisation.  Holland goes so far as to describe the new religion as the "culmination of Late Antiquity".

This is the controversial part, of course.  Much scholarship (most of it, for sadly obvious reasons, by non Muslims) has been done on such topics as the formation of the Koran and the historical sources for the life of Mohammed.  There's a good summary of it here.  Holland is however probably the first popular writer to bring these issues before a wider educated public.

The lack of contemporary evidence for Mohammed's career may come as a surprise.  Mischievously, Holland began his presentation with a quote from Salman Rushdie contrasting the little we know about the historical Jesus with the vast amount that is apparently known about Mohammed: "We know where he lived, what his economic situation was, who he fell in love with."  Except that much of this biographical richness turns out to be an illusion.  The earliest accounts of the prophet's life date from more than two centuries after his supposed death.  And the author of the principal early biography explicitly stated that he had edited out any material that might be embarrassing or reflect badly on the founder of Islam (did he fear a Khomeini-style fatwa?).  Later biographies became progressively more detailed, increasing the impression of verisimilitude while getting ever further from source.  They were, in other words, largely fictional.  Karen Armstrong's biography certainly reads like a romantic novel; perhaps that's why.

The only possible contemporary reference to Mohammed --a text called the Doctrina Jacobi -- hints that "the prophet who has arisen in Arabia" personally led the Muslim invasion of Palestine.  Holland argues that the compilers of the official biographies may have killed Mohammed off early so as to reinforce the parallel between the prophet of Islam and Moses, who died before reaching the promised land.

Holland detonated a few more landmines.  Many of the Arabs who "invaded" the Byzantine empire in the early 7th century were already there, being paid as mercenaries to defend the frontiers -- rather as, earlier, the western Emperors had employed Goths, and with similarly catastrophic results when the money ran out.  The Koran emerges as less a divine dictation (or the product of one hyperactive imagination) than a compilation of older ideas; and its milieu not the desert but the world of Levantine religious disputation.  Forgotten debates about the nature of Christ, old-hat even by the fifth century, are preserved in its verses.  One chapter turns out to be an almost word-for-word transcription of a Syrian text.

Most dramatically, perhaps, Mecca plays almost no part in the story.  On the contrary, there are references in the text to places in Palestine which "you walk past every day".  The original holy city of Islam was Jerusalem; and while traditionally it was Mohammed himself who made the switch, following a row with the Jews of Medina, Mecca only began to achieve prominence a hundred years later during the reign of Caliph Abd al-Malik.

Given the centrality of Mecca to Muslim religious practice -- as the direction towards which prayers are offered, as the home of the great shrine of the Kaaba, above all as the locus of the supreme act of Islamic devotion, the Hajj -- this is, to say the least, somewhat startling.  In response to a question, Holland said that there was nothing to suggest that Mecca was an important religious centre in pagan Arabia (there were cube-like shrines in many other parts of the Arabian peninsula), or even an important trading city.   It's certainly a very different perspective to that on display the British Museum's highly successful (and officially sanctioned) exhibition about the Hajj.  The Saudis will be delighted.