The Chief Rabbi versus the barbarians 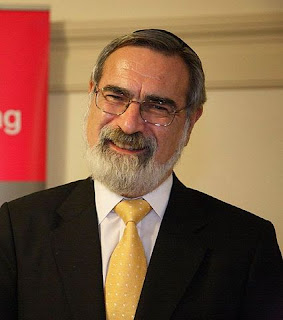 In the current issue of the Spectator, the outgoing Chief Rabbi has been lamenting the decline in the intellectual quality of atheists. AC Grayling, he seems to be saying, is no Hobbes, Christopher Hitchens can't measure up to Voltaire, and no-one (certainly not Dawkins) can match the "world-shattering profundity of Nietzsche". Instead, most of the atheists who have been selling books over the past decade haven't managed to get beyond trumpeting the shattering news that evolution works and that religious people sometimes do bad things in the name of God.

"Where is there the remotest sense that they have grappled with the real issues?" he wails -- the "real issues" being, of course, the sort of unresolvable "big questions" that make for a fun Sunday morning's viewing for people who aren't in church reassuring themselves that Someone has the answers.  The underlying assumption is that the most fundamental questions in the universe are those that happen to be psychologically important to human beings.

Jonathan Sacks doesn't mention Alain de Botton, a professed atheist and pop philosopher whose recent book suggested that (since everyone agrees that religion isn't actually "true") it would be more worthwhile to snaffle some of religion's good ideas than just to laugh at Creationists, which is mostly what Dawkins seems to do with his time. That might be because de Botton doesn't really measure up beside today's atheist big-hitters, inferior to Hobbes and Nietzsche though they undoubtedly are. Or it might be because Sacks is uncomfortably conscious that his own analysis is in its way as cynical and utilitarian an exercise as de Botton's own.

By which I mean, Sacks' case for religion is an entirely pragmatic one. He's not saying, at least not here, that the purpose of religion is to worship God in the ways that God desires to be worshipped, and to obey God's commandments because, well, they are the commandments of God. He's not even hinting, as his scriptures repeatedly proclaim, that those who obey God will be rewarded and those who defy God will be punished. He's merely repackaging the familiar argument that says that people need religion to be moral and society needs religion to be stable. "Only religion," runs the headline, "can defeat the new barbarians."  Or as Sacks writes in his conclusion, "I have not yet found a secular ethic capable of sustaining in the long run a society of strong communities and families on the one hand, altruism, virtue, self-restraint, honour, obligation and trust on the other."

This is religion as Noble Lie. It may not be true, the theory runs (though perhaps it is - who knows?) but people need it: it gives meaning to lives and authority to morality. That's what really matters: "you cannot expect the foundations of western civilisation to crumble and leave the rest of the building intact." Sacks praises Nietzsche for his nihilism, for his invocation of the Will to Power, not because Sacks wants us to worship strength and despise forgiveness and humility (quite the reverse) but because the logic of his argument requires Nietzsche to be right. You cannot have atheism and gentleness, atheism and altruism, atheism and tolerance, because the source of all these positive virtues is religion (or perhaps God: it's not quite clear). The only logical choice is between God and Hitler. "Nietzsche was not an anti-Semite, but there are passages in his writing that come close to justifying a Holocaust."

This is a terrible and immoral argument. Immoral because of its essential dishonesty (the only honest reason to practise a religion, surely, is belief in God) and terrible because it's just not true. Most atheists manage to lead perfectly moral and decent lives; not all religious people do. There's simply no correlation (at least, no positive correlation) between the religiosity of a society and its social harmony, levels of tolerance, compassion. Look at Denmark and Sweden, which are among the most secular countries on earth. Look at Afghanistan and Somalia, which aren't. Look at the difference between Ireland in its decades of near-theocracy and state-sanctioned clerical abuse and Ireland today. Is that a story of regression?

It is, I agree, intuitively plausible to argue that people need a religious structure to underpin their morality, just as selective memory causes people (especially as they get older) to exaggerate the virtues of the past. But there's simply no evidence that this is so. Sacks quotes Heine's 1843 prophecy that without the restraint of Christianity Germany's "martial ardour" and "the mad fury of the berserk" would be reborn, as prophecy that did indeed seem to be fulfilled in the 20th century. There's an extent to which social Darwinism (a bastardisation of Darwin's own theory of natural selection, it need hardly be said) fuelled the mindset that led to the First World War, and later Nazism. But Germany ultimately recovered its moral bearings without undergoing a religious revival. The country is far more secular today than it was at the time of the Third Reich, to say nothing of Nietzsche's own time.

"Lose the Judeo-Christian sanctity of life and there will be nothing to contain the evil men do when given the chance and the provocation," warns the Chief Rabbi. So how was the deeply religious Ivan the Terrible not restrained, or that warrior of Christ Vlad the Impaler, or the Crusaders who made the streets of Jerusalem run with blood? Tom Holland has a lovely story in his blood-drenched book In the Shadow of the Sword about one of Lord Sacks' co-religionists, Yusuf As'ar Yath'ar, the last Jewish king to reign in Arabia and a man famous for his piety. When Yusuf conquered the Christian city of Najran amidst much slaughter, he had the daughter and granddaughter of a woman who dared to challenge him killed in front of her and their blood poured down her throat before she herself was beheaded. Par for the course in those deeply religious times.

"The history of Europe since the 18th century has been the story of successive attempts to find alternatives to God as an object of worship, among them the nation state, race and the Communist Manifesto," writes Sacks. Indeed it has. It has also been a story of increasing material wealth and moral improvement, from the abolition of slavery to the abolition of (except in the more religious American states) of capital punishment. Modern dentistry is a fair compensation for the loss of religious fervour, is it not?

Sacks believes that "our newly polarised culture is far less tolerant than old, mild Christian Britain". This is, at least, arguable. There's much less racism and much more acceptance of people's different sexual arrangements than there used to be. On the other hand there is, certainly on an official and corporate level, more imposition of conformity and less tolerance of dissenting points of view. Diversity of appearance seems to come at the cost of uniformity of opinion. Kenan Malik has written brilliantly about this. But of course, clampdowns on free expression are usually justified in the name of protecting religious people from offence, so it's hard to see how this helps the Chief Rabbi's argument.

But it all comes back to the idea that a society that isn't underpinned by a strong religious faith is no match true believers. "Defeating them will take the strongest possible defence of freedom, and strong societies are always moral societies." It's a thought echoed in the old Al Qaeda saying that "we love death more than you love life". Sacks here resorts to a rather dubious historical parallel:

Humanity has been here before. The precursors of today’s scientific atheists were Epicurus in third-century BCE Greece and Lucretius in first-century Rome. These were two great civilisations on the brink of decline. Having lost their faith, they were no match for what Bertrand Russell calls ‘nations less civilised than themselves but not so destitute of social cohesion’. The barbarians win. They always do.

There were indeed Romans of the 1st century BC who thought that their society was in a state of moral decline from the days of its pristine republican virtue, when men like Cato the Elder upheld the sternest of patriarchal values. But history tells a different story: even half a century of titanic civil wars did nothing to undermine Roman domination of the Mediterranean, and the empire that emerged from Octavian's ultimate victory lasted for hundreds of years, decadent as it often seemed to be. It's a strange parallel in many ways. When Rome did finally fall to the barbarians, it was not the sceptical philosophy of Epicureanism that was to blame, though Gibbon did think that the empire's adoption of Christianity played some part.

On the other hand, Sacks may not be wholly wrong. A society with a strong religious (or other ideological) underpinning may well be more cohesive and more sure of itself. There is an intellectual and moral flabbiness about the modern secular West, with its institutionalised posture of relativism and its reluctance to give offence. It can result in capitulation to bullies - a willingness to condemn, for example, the Danish cartoons more than the disgraceful violence that accompanied protests against them. There are dangers when the state steps into the role once played by religion as moral end-stop and superego. The chief advantage of God, after all, is that he doesn't exist (or at least, he acts as though he doesn't) so is less of a threat to liberty than a state that aspires to both omniscience and omnipresence. The increasing replacement of trust by supervision and regulation (because trust can be, and will be, abused; because "never again") has terrible side-effects, though I don't see quite how the decline of religion can be held responsible for it.

There are other downsides to secularism that Sacks doesn't mention. There's a deadening, somewhat puritanical and certainly prosaic quality to secular culture; atheism really can't do art. There's also the propensity of the religious to out-breed the secular, and the ultra-religious to out-breed the moderately religious. One sees it, for example, in the way that Israel is now being changed by ever-growing numbers of ultra-Orthodox Jews who want women to sit at the back of buses.

But demography is not morality, and even religious believers in most Western countries (even Catholics) have far fewer children than they would have done a century or two ago. And that points towards Sacks' main confusion. We don't actually live in a secular culture, even if religious practice has become a minority activity. We live in a society that has been built, a culture that has been enriched, by the secular and religious alike. Religious believers played a full part in the Enlightenment, in the scientific revolution, and in the social progress of the past two and a half centuries. Malthus and Mendel were both priests; Shaftesbury and Wilberforce were Evangelical Christians. Such people may have believed that they did what they did out of religious conviction or for the glory of God, just as others who made equally great contributions to Western society believed that they were doing so in opposition to religion. But ultimately it didn't matter, because ultimately whether someone believes in God or not makes surprisingly little difference.
Email Post
Labels: atheism religion Society