Pope Francis - making saints up as he goes along

One of the major perks of becoming Pope is a much increased chance of being made a saint after your death. As of this morning, 78 of the 266 officially recognised Roman pontiffs had been canonised, and we now learn that both John Paul II and John XXIII are to be added to that select company of Heaven. So well done to both of them. No doubt the news will come as some encouragement to the shade of Benedict IX, who died as long ago as 1304 and has been waiting for sainthood for almost three hundred years now, having been declared "Blessed" in 1736.

The problem for Benedict IX (who, if he finally makes it, ought to be declared patron saint of queuers) would seem to be the rules. Because just being pope isn't enough, nor even being an especially holy pope. You also need to have performed at least two verified miracles since your death. One for a beatification, two for full sainthood. And that's a big hurdle, because the Vatican employs a crack team of investigators whose job it is to subject claims of the miraculous to the strictest scientific scrutiny.

They won't accept just any old miracle. The 19th century theologian John Henry Newman, for example, had to wait several decades after his cause was opened until a suitable miracle was discovered. Happily, just in time for Pope Benedict's visit to Britain in 2010 the Vatican confirmed that a man had been miraculously cured of backache through Newman's intercession. Even more happily, the recipient of the miracle, Jack Sullivan, was able to be present at the beatification ceremony. He was even able to hobble painfully to the lectern and read a lesson. A very impressive miracle, you'll agree, especially considering that Mr Sullivan had also endured a back operation. According to Michael Powell, a consultant neurosurgeon at London's University College Hospital, a procedure like Sullivan's typically took "about 40 minutes, and most patients... walk out happy at two days". But of course most patients don't have a would-be saint on their side.

Anyway, the good news is that a second miracle has now been confirmed for John Paul II: a Costa Rican woman was cured of an aneurysm on the very day the late Pope was beatified two years ago. This means that JPII gets to become a saint in near record time, a mere eight years after his death and within the lifetime of some of the serial child-abusers he protected from the authorities. But let no-one say he didn't abide by the rules. 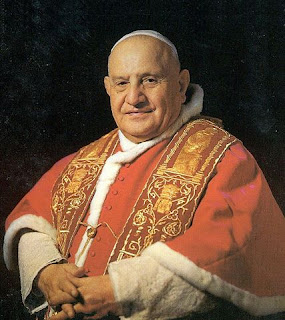 But what of John XXIII, the popular pope who died fifty years ago and who will be canonised at the same time as his successor-but-two? He was beatified on the strength of a miracle that took place in 1965, but it would seem that his posthumous powers must have waned somewhat. No new miracle has been confirmed. But never mind: Pope Francis, who as Pope can do pretty much whatever he likes, has waived the requirement for a second miracle.

No-one, of course, would deny that John XXIII thoroughly deserves to be made a saint. He's known as "the good pope", after all. That epithet can't mean that all the other popes were bad, given how many of them have been made saints already. It can only mean that even by the exalted standards of the papacy John XXIII was remarkable for his goodness. Despite looking more like a mafia don than any pope since Rodrigo Borgia. And he has had a rather longer wait than John Paul II, even if it's nothing compared with the delay poor old Benedict IX has had to endure. (And no special dispensation for him.) But just what is the point of having a rule if the pope can just arbitrarily dispense with it whenever it proves inconvenient? I'm almost tempted to agree with Richard Dawkins, who complained in The God Delusion that


What impresses me about Catholic mythology is partly its tasteless kitsch but mostly the airy nonchalance with which these people make up the details as they go along. It is just shamelessly invented.

Predictably, Pope Francis's decision to canonise John XXIII despite only having one miracle to his name is already being spun as yet more evidence for his refreshing disregard for the niceties of Vatican protocol. As top Vatican watcher John Allen puts it,


In multiple ways, Francis has already demonstrated his willingness to break with convention – not living in the papal apartment, not heading off to the summer residence at Castel Gandolfo for his vacation, even pulling out of a Vatican concert at the last minute because he felt he had better uses of his time. Today’s announcement is thus another indication that for Francis, tradition is more a guide than a master.

I'm sorry, but the procedure for determining whether an individual is, or is not, a saint is a rather more serious matter than where the pope chooses to spend the evenings. It is one of the most solemn acts that the Catholic Church can perform. It's no mere badge of merit, like giving someone an honorary knighthood. Theologically, indeed, the Church doesn't "make saints" at all. Only God can make saints. The miracle requirement exists to provide tangible evidence that the candidate for sainthood has reached heaven and enjoys the especial favour of God. Not only must the miracle be scientifically validated, in other words, but the requirement is itself akin to a scientific proof. It exists to provide experimental confirmation of the hypothesis that X is a saint. And God, the theory goes, will always provide the proof. So to say, "Oh well, never mind, let's just ask the Pope" is to cast aside the whole basis of the canonisation procedure. It's the Pope literally playing God.

Which is a bit much, even for a Pope.

And the "two miracles" rule does make a kind of sense, even if you don't happen to believe in miracles. It offers a fairly good indication of whether a candidate for sainthood attracts sufficient devotion - real heartfelt devotion, that is, as opposed to mere willingness to sign petitions. If enough people are praying for a saint's intercession, after all, the chances increase that someone will have an apparent miracle. Medically unexpected recoveries do after all happen occasionally, whether or not the person is praying, and prayer may even promote healing through a version of the placebo effect. The lack of a recent miracle for John XXIII may indicate that he hasn't been as much at the forefront of Catholic consciousness in recent years as John Paul II has. But the answer to that would be to promote his cause more assiduously, and encourage would-be miracle recipients to get praying.

Allen also thinks that to canonise two such different personalities as the same time "underscores the inclusive spirit of Francis’ papacy" and even a "gesture in the direction of collegiality". In other words, it sends a message. But ignoring the rules just because it's convenient to hold a two-for-the-price-of-one canonisation ceremony for the dead popes in fact smacks of arbitrary rule - of a pope who is, as Dawkins suggested, simply making it up as he goes along. That's no basis for a credible religion. In fact, now I come to think about it, quite a lot of this new pope's actions hint at a lofty disdain for the traditional way of doing things, almost indeed at a Blairite impatience with institutions and procedures. And we all know where that led.

Francis, of course, can't put a foot wrong, just as Benedict XVI couldn't put a foot right. If he sat on a kitten he would be praised for his humility in choosing such an uncomfortable cushion. (If Ratzinger had sat on a kitten, by contrast, it would have been seen as an attempt to restore the ancient papal prerogative of cat-sitting, last invoked by Pius IX after an unusually opulent lunch.) So he can ostentatiously refuse to attend a concert put on in his honour or make snide remarks about people saying rosaries on his behalf, and the international press swoons at yet more evidence of his humility. Actually, though, such high-handed humility strikes me as rather arrogant - or at the very least, indicative of a taste for the exercise of arbitrary power, a characteristic of the papal monarchy at its most medieval.

If in the modern day and age the concept of a scientifically validated miracle has become embarrassing (because almost any, no any, "miraculous" healing can be explained in natural terms, whatever the Vatican miracle-testers may claim), it might of course be amended. By papal decree, if need be. But that would mean dropping the requirement for all future would-be saints, not just for a particular dead pope whose canonisation happens to be convenient. Because consistency matters, especially one would hope in a religion that is meant to offer people certainty in their lives.
Email Post
Labels: catholicism miracles Pope religion