Sarah Palin and the Scientologist 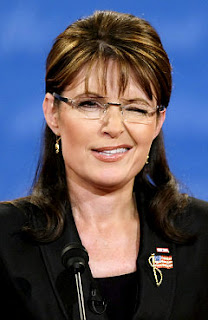 It has been a while since this blog brought you news of the redoubtable governor of Alaska. This hasn't been for want of material. Back in January came the launch of Sarah Palin's Political Action Committee, thought by many to be evidence of her grand ambition to topple Barack Obama in 2012. Then last month news broke of the collapse amid mutual recrimination of the engagement between Bristol Palin and the father of her child - an engagement that seems to have been invented to make the Republican faithful less sniffy about the whole unmarried teenage mom thing in the run-up to November's election.

Of course Palin has never been one to let a little family embarrassment get in the way of her mission, and it would seem that her campaign for the White House is already in full swing. Last week, the Draft Palin for President campaign held its first fundraiser, signing up a hundred local organisers. She has apparently been invited to be the keynote speaker at the annual Republican House-Senate fundraising dinner in June. The invaluable Alaskan politics blog Mudflats also reports that potential voters in Iowa and New Hampshire have been receiving unsolicited phone calls canvassing their opinions on a Palin bid.

One of the questions posed was whether voters thought it was important that Palin was re-elected in 2010, leading Mudflats to speculate

Is our governor wondering if a re-election bid is necessary, or whether she should just go for the book deal -> publicity tour -> big money -> start campaigning for 2012 in 2010 option?

As if that wasn't enough, she has invited herself to a parade in Auburn, NY, (also in June) celebrating the fiftieth anniversary of Alaska's statehood. The event - commemorating the fact that William Seward, who helped ensure that Alaska became a full state in 1959, happened to live in Auburn, seems to have been created especially for her. At any rate, it's unlikely to be pure coincidence that a leading member of the organising committee happens to be the father of her spokeswoman Meg Stapleton.

Stapleton is one of the "protectors of the Palin brand" identified by Chris Cillizza of the Washington Post, who notes that

There is no brand in Republican politics as powerful -- or as tenuous -- as that of Alaska Gov. Sarah Palin. She is simultaneously the hottest commodity on the Republican fundraising circuit and a figure of ridicule among Democrats (and even many Independents) who believe that her status as a national figure is entirely undeserved.

Another prominent supporter is John Coale, a well-known Washington lawyer and the husband of Fox News Channel's Greta Van Susteren. In an interview with Cillizza, Coale

described himself simply as a "friend" of the Alaska governor but acknowledged that he suggested she start a leadership PAC and helped her navigate through some of the questions surrounding her family that lingered after the campaign. Others familiar with Palin's political team insist that Coale has far more power than he is letting on -- essentially helping to run Sarah PAC.

Perhaps the most intriguing thing about Coale, as revealed by Gawker's John Cook, is that he is a long-standing and high-ranking member of the Church of Scientology. Cook notes that Coale has reached the exalted level of OT (Operating Thetan) VII. Which means that he will long ago have been initiated into the mysteries of Xenu, revealed to anyone above level III. Scientology spokesman Tommy Davis confirmed publicly the other day - after years of official denial - that according to their doctrines we are all contaminated by brainwashed alien soul remnants created millions of years ago by the alien warlord Xenu. The theologically literate will instantly recognise that scenario as a space-age spin on Gnosticism - but most others will assume that Scientology is absurd tosh. To be fair, all religions have doctrines that non-believers find hard to take seriously; it's one of the things that distinguishes a religion from a philosophy.

Van Susteren's penetration of the Palin clan is total—she's been in Alaska practically every other week burnishing Palin's image in friendly profiles. The church's recruitment strategy has always been to snag high-profile converts like Tom Cruise and Will Smith, and it is well known for dispatching operatives on elaborate covert schemes to draw unsuspecting targets into the cocoon.

I wonder if, come the next presidential election, Tom Cruise will be bouncing up and down on Oprah Winfrey's sofa declaring his support for Sarah Palin. That wouldn't go down too well with Oprah. It will be interesting to see how Sarah Palin's most consistent support-base of Bible-believing Evangelicals react to news that she's taking advice from Scientologists. There always was something cultlike about the Palin phenomenon, so perhaps it's only fitting if it ends up being absorbed by the most preposterous cult of them all. If I'm still allowed to say that.
Email Post
Labels: Politics Sarah Palin Scientology US election US politics

Anonymous said…
This is ridiculous I have friends who are atheists but that does not mean I am going to be an atheist.
20 March 2009 at 21:07

XN8D said…
Scientologists aims to build a Scn world, a totalitarian world dominated by scn'ists. Currently Scn has it's own law and justice system. Scn'ists are not allowed to sue each other, but to use their own courts. With a high level scn'ist running a presidential candidates's PAC, that goal is one step closer. Coale is already on the Maryland medical board overseeing psychiatry, which all Scn'ists vowed to destroy.
21 March 2009 at 00:45

Anonymous said…
Do you know that Coale is a card carrying Liberal? He gives thousands of dollars to Democratic canidates and the DNC don't believe me do a google search.
21 March 2009 at 06:25

valdemar said…
I really would like to see a fundie wingnut GOP candidate with Scientology backing, as Michelle Obama needs a second term to get Dubya's pretzel debris out of the carpets.

But this sounds too good to be true, doesn't it? And would even Mrs Palin be stupid enough to line up with a flagrantly non-Christian outfit when being a Mormon costs Mittens Thing so many fundie votes?

Maybe she really is that stupid. Oh joy. At this rate PZ Myers and Daniel Dennett will end up in government.
21 March 2009 at 08:25

Anonymous said…
Coale is not a liberal - he supports whoever is in power. He used to contribute copiously to both Clintons, and when Hillary lost the nomination he switched to McCain, developed a crush on Palin and now fervently supports her. Obama wasn't interested in his donations or his fake religion.

Scientologists will claim that their creed does not interfere with being any other religion. But yes, it should be wacky enough to turn most people off. But it's also a dangerous game to play when voter fraud is so prevalent.
22 March 2009 at 12:55

Anonymous said…
As to the first response that alleges that the article somehow claims that Palin will become a Scientologist b/c a couple of her supporters are, the article has a very different point and never claims any such thing. Not even a hint or whiff of this claim. Rather, it alludes to the difficulty she will have taking someone who MAY be a much bigger supporter than has been acknowledged is going to have a big problem getting the support of conservatives who will have a lot of trouble with this. And that link makes me happy! I have always thougth Dems should send money to the Palin campaign, with Joe the Plumber as running mate! We'll be in power forever!!!
23 March 2009 at 03:19