Our Lady of the Tree-stump

For reasons no-one has satisfactorily explained, the Irish parliament this week passed a new "blasphemy" law which few wanted and nobody at all, it seems, was demanding. This despite a last-ditch campaign to avert it, which attracted support from the writers of Father Ted amongst others. The government explained (I think) that it was introducing the law because the constitution said there had to be one - although the country has got along perfectly well for seventy years without anyone noticing the deficiency. Or, if they did, regarded the question as purely a theoretical one. Writing in 1999, following the collapse of the last attempt to bring a blasphemy prosecution in Ireland, journalism lecturer John Horgan commented that "no Irish government would now contemplate drafting a law defining blasphemy". So what's changed?

As Padraig Reidy says, "no one can think of a single thundering priest, austere vicar, irate rabbi or miffed mullah ever calling for tougher penalties for blasphemy". Nevertheless it will now be a crime to "publish or utter matter that is grossly abusive or insulting in relation to matters held sacred by any religion, thereby causing outrage among a substantial number of the adherents of that religion". Presumably "any religion" would include Scientology. 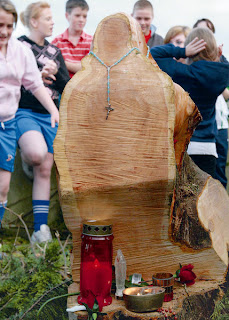 I was going to join the chorus of moaning about the provision - but then I spotted this story in the Irish Times about a tree-stump which superstitious peasants think resembles the Virgin Mary. It was discovered in a churchyard in Co Limerick by workmen felling decayed trees on the site - I assume their actions created it - whereupon "scores of people from across the country gathered to say prayers". As you can see, the stump has now become a shrine. Nearly two thousand people have signed a petition demanding that it be left in situ. It was due to be removed yesterday - but the "graveyard committee chairman" (a job to die for?) Noel White has given assurances that it will be not be harmed. He says:

Nature has a funny way of showing things up and let it be a freak of nature or something else, but, whatever it is, surely it is a wonderful thing to see so many people coming out to pray, especially young people who have been saying the rosary in the church for the past few nights.

Not everyone thinks it's so wonderful, though, including the parish priest Willie Russell, who told local radio, "There’s nothing there . . . it’s just a tree . . . you can’t worship a tree". This from a representative of an organisation that still cherishes and venerates splinters of "the True Cross" in churches all over the world. Meanwhile a spokesman for the diocese said, that "the church’s response to phenomena of this type is one of great scepticism".

Presumably church leaders would prefer their faithful to wade through the impenetrable verbiage of the Pope's latest encyclical, where they would discover a multitude of commonplace thoughts on the economy dressed up in theological language. But as in politics, so in religion: what people really want is trivia and gossip. This tree stump will do more to boost church attendances than a hundred encyclicals.

Hail Stumpy, full of grain
Blessed art thou among tree-trunks
And blessed is the fruit of thy bough

Is that "outrageous" enough, I wonder?

Coincidentally, I see that Michael Jackson has also been making an unscheduled comeback appearance in a tree-trunk, this time in Stockton, California. Said its "discoverer", Felix Garcia, "I hope to take some pictures of it and blow them up because there are a lot of people who loved him." Inescapable logic. Anyone inspired by this apparition to set up a new religion honouring Jacko as its prophet is advised to move to Ireland, where they will be protected from insult.
Email Post
Labels: blasphemy catholicism general weirdness religion