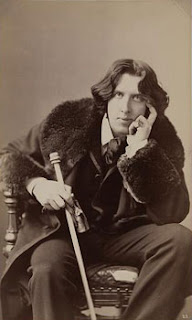 L'Osservatore Romano is usually described as the Vatican's "official" newspaper. This means, among other things, that journalists are liable to look upon it as they looked upon Pravda in the days of the Soviet Union. Reading it, it is made to seem, is like peering into the Pope's brain. Twice in the past week articles in OR have been interpreted as official Catholic U-turns on major cultural matters: first Harry Potter, which the Vatican has supposedly come round to despite the Pope's well-publicised earlier reservations (though see here for my earlier discussion of this important issue) and Oscar Wilde, who according to Friday's Independent has now been embraced by the church - in spite of You Know What. Jerome Taylor comments that Oscar "is an unlikely pin-up for the Catholic Church".

The original article, by Paolo Gulisano, concentrates on Wilde's philosophical ideas rather than his personality or his sex life, describing Wilde as "one of the personalities of the 19th century who most lucidly analysed the modern world in its disturbing as well as its positive aspects". Like many people, it seems, Gulisano mistakes Wilde's shallowness for a type of profundity. Oscar himself, of course, was more subtle than that. He realised - though it's hardly much of an insight - that "most people are other people", as he put it in De Profundis. "Their thoughts are someone else's opinions, their lives a mimicry, their passions a quotation". It was therefore not difficult to gain a reputation for wisdom by the simple expedient of saying unexpected things. What is rather more surprising, perhaps, is that his laboured witticisms are still impressing people more than a hundred years after his death. He would have liked that, I suspect. As he might have said, "Had I known that there were so much profit in dying, I should have done it more often".

In fact, the Catholic Church was reconciled to Wilde (had they ever been otherwise) as long ago as 1900, when the author was received into the fold on his deathbed. Whether Oscar was reconciled to Catholicism is rather more doubtful: his alleged conversion, to judge by Richard Ellman's account of it, seems to have been largely an administrative convenience to enable his burial in consecrated ground. By the time his last remaining friend Robbie Ross called for the priest Wilde was semi-comatose and in no condition to resist.

Wilde was undoubtedly attracted by elements of Catholicism - especially the aesthetic dimension, and also the intense concentration on sin (as an enthusiastic self-dramatiser, he liked to exaggerate his sinfulness). He flirted with conversion in his twenties. At Oxford, a visitor recalled, his room was "full of photographs of the Pope and of Cardinal Manning" and "his long-haired head full of nonsense regarding the Church of Rome". He also, notes Ellman, "adorned his third finger with an oval amethyst right that looked faintly ecclesiastical". A couple of years later, visiting Rome, he secured an audience with Pope Pius IX, which left him, unusually, "too awestruck to speak". But that seems to have been as far as it went. Eventually he "turned aside from Catholicism with as much éclat as he had turned towards it." Towards the end, when Ross fervently declared to him that Catholicism was true, he replied merely "No, Robbie, it isn't".

This passage from The Picture of Dorian Gray seems to sum up both Wilde's attraction to Catholic Christianity and his rejection of it:

It was rumoured of him once that he was about to join the Roman Catholic communion, and certainly the Roman ritual had always a great attraction for him. The daily sacrifice, more awful really than all the sacrifices of the antique world, stirred him as much by its superb rejection of the evidence of the senses as by the primitive simplicity of its elements and the eternal pathos of the human tragedy that it sought to symbolize. He loved to kneel down on the cold marble pavement and watch the priest, in his stiff flowered dalmatic, slowly and with white hands moving aside the veil of the tabernacle, or raising aloft the jewelled, lantern-shaped monstrance with that pallid wafer that at times, one would fain think, is indeed the "panis caelestis," the bread of angels, or, robed in the garments of the Passion of Christ, breaking the Host into the chalice and smiting his breast for his sins. The fuming censers that the grave boys, in their lace and scarlet, tossed into the air like great gilt flowers had their subtle fascination for him. As he passed out, he used to look with wonder at the black confessionals and long to sit in the dim shadow of one of them and listen to men and women whispering through the worn grating the true story of their lives.

But he never fell into the error of arresting his intellectual development by any formal acceptance of creed or system, or of mistaking, for a house in which to live, an inn that is but suitable for the sojourn of a night, or for a few hours of a night in which there are no stars and the moon is in travail.

We can take it, I think, that he wouldn't have thought much of the liturgical changes that followed the second Vatican Council. On the other hand, as an aesthete and natty dresser the present pope might well have met with his approval.

Following up the story on CIF yesterday, Martin Prendergast suggested that Wilde may have be taken by "the camp ultramontanism of 18th and 19th century liturgy and music". Well obviously. But perhaps we have it the wrong way around. Why is it that such all that lace and incense seems so camp in the first place? Largely, I suspect, because it was the sort of thing that appealed to Oscar Wilde. Earlier generations would not have made the same assumption. The fops of the eighteenth century tended to be enthusiastically heterosexual, although they dressed like pantomime dames. Wilde himself was married for much of his life, and Ellman claims that as an undergraduate he contracted syphilis from a (female) prostitute [though the evidence for this is circumstantial at best]. His intense aestheticism only seems suspicious with the benefit of hindsight. Likewise the mysterious beauties of the Tridentine liturgy.

Despite his doubts (what kept him from admitting his atheism, I think, was his conviction that materialism was dull) Wilde had a lifelong fascination with the figure of Jesus Christ - or at least with his own idiosyncratic version of Jesus, who was a lot like Oscar. On occasion he indulged his creativity by inventing new heresies and re-writing gospel stories to suit his fancy. Wilde's Christ, as portrayed in two of his major prose works, The Soul of Man Under Socialism and De Profundis, is a prototype of the romantic Artist, a paradoxical moralist who lives out Wildean aphorisms - but also, in retrospect, a proto-hippy, "the first person who ever said to people that they should live flower-like lives". In The Soul of Man, Christ sounds strangely like a self-help book:

He said to man: "You have a wonderful personality. Develop it. Be yourself. Don't imagine that your perfection lies in accumulating or possessing external things. Your affection is inside of you... Personal property hinders Individualism at every step".

But by the time of De Profundis, written in Reading gaol, Jesus seems to be turning Japanese:

He preached the enormous importance of living completely for the moment. All that Christ says to us by the way of a little warning is that every moment should be beautiful, that the soul should always be ready for the coming of the bridegroom, always waiting for the voice of the lover...

Wilde's Jesus has little in common with either the Jesus of theology or (I assume) the Jesus of history. There's something Hellenic about him, his life the acting out of a Greek tragedy more perfect than any by Euripides. "The absolute purity of the protagonist raises the entire scheme to a height of romantic art from which the sufferings of Thebes and Pelops' line are by their very horror excluded, and shows how wrong Aristotle was when he said in his treatise on the drama that it would be impossible to bear the spectacle of one blameless in pain". It pleases Wilde to imagine that Jesus spoke Greek rather than Aramaic, and even asserts that the responses of the Catholic mass represent the "ultimate survival" of the tragedic chorus. Wilde's Christ is more like a literary character of his own invention than an actual human being. But then, of course, the same was true of Oscar himself. He intended, had he lived, to write a full-length account of his thoughts on the subject. Perhaps we should be glad he didn't.

Would he have stayed the course as a Catholic? It's difficult to imagine, and not simply because of his unorthodox ideas, or his "sinful" conduct. Gulisano describes Wilde as "a lover of the ephemeral"; but the Roman Catholic church of his day was rigid both in doctrine and ritual. Wilde would soon have become bored by the endless repetitions. "All repetition is anti-spiritual", he claimed in De Profundis - unconvincingly, it has to be said. He was enthralled by the drama of sin and redemption: Jesus, he contended, "seems to have always loved the sinner as being the nearest possible approach to the perfection of man". He wanted constant excitement. Could he really have got through a full set of Hail Marys without altering the words?
Email Post
Labels: catholicism culture history religion