Were Sigmund Freud alive today, I suspect he'd have found much to contemplate in the £1.85 million scheme to turn Brick Lane into a museum of cultural diversity. 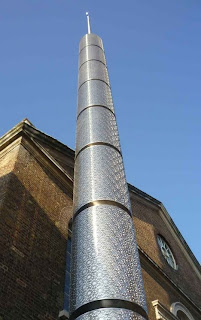 Already, a 30-metre tall shiny steel "minaret" has been created to phallicise the local skyline. It's not actually a minaret, in that no muezzin will climb atop it to call the faithful to prayer, but since it's attached to the local mosque (once a church, then a synagogue) it would be odd to use any other word to describe it. Especially since when the design was first unveiled - as part of Ken Livingstone's doomed re-election campaign, strangely enough) it was officially called a minaret.

When opposition emerged to the attachment of an incongruous metal structure onto a Grade II listed building (hardly unprecedented: the Ottomans did something similar to the Parthenon) it became "an illuminated minaret-like structure". Now it's merely a "large steel art sculpture". "A crescent shaped light at the top of the spire has been included to help the structure act as a beacon for the area," adds a press release from the architects. Definitely not a minaret, then. Just shaped like one.

Stage two is an arch in the shape of a hijab - designed by the same architect as part of a "Cultural Trail". As a concept, it's not without interest. Arches, despite their somewhat vaginal shape, have historically been rather masculine structures. Roman emperors built them to celebrate their triumphs; Saddam Hussein had an arch erected to his glory in the shape of crossed swords. The "hijab arch", by contrast, will be feminine and accommodating - quite the opposite of the aggressive "minaret" - and will in addition provide shelter from the rain.

Someone from Tower Hamlets explained (unconvincingly, to some) that the structure isn't about Islam, not really, because "many men and women currently wear headscarves or bandanas as a fashion statement, and with Brick Lane being a cultural melting pot, this design reference seems appropriate and fitting." Hmm. Here's an artist's impression so you can judge for yourself. 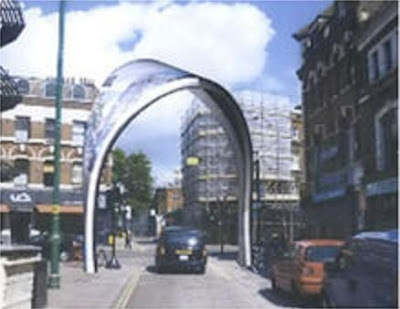 It reminds me more of a bonnet from the era of Jane Austen. As far as I'm aware, however, Elizabeth Bennet and her sisters do not form part of the regions' rich cultural diversity, undoubtedly rich and undeniably diverse though it is. I think it's reasonably clear what they had in mind. It was described officially as being "based on the sculptural form of a headscarf". On the other hand, if we hadn't been told that we might not have noticed.

The Hijab Arch, or whatever they decide to call it, hasn't gone down too well with local residents, including Tracey Emin who has complained that the proposal "has no relevance to the heritage of the area or its future". Some feel that, when combined with the "minaret", the effect is to stamp an Islamic identity on the area - an ironic outcome for a project designed to celebrate "diversity". Others fear it embodies a stereotypical image of Islam. Kia Abdullah writes:

Personally, I cannot identify with the symbolism, even as a Muslim woman. For many, the hijab represents modesty and freedom of choice but we cannot ignore that it is also one of the most contentious and divisive issues of modern times – within the Muslim community as well as outside it. Its proposed role as a symbol of integration and inclusiveness is counter-intuitive at best and unfathomable at worst.

But that, perhaps, is the point. Whatever one thinks about it, the Muslim headscarf is far, far more than a clothing choice or even a religious statement. For some it symbolises oppression and male control of female sexuality (an interpretation for which there is a great deal of historical support, by no means all from the world of Islam). For others it is political as much as religious: a badge of identity, either proudly adopted or imposed by social pressure or, in some countries, by law. It is about demarcation: firstly of women from men, secondly of Muslims from non-Muslims.

Recently, in Britain, another meaning of the hijab has arisen: multiculturalism. It is not enough to tolerate the hijab. For many who consider themselves politically progressive, it must be welcomed, and indeed celebrated, as a symbol of cultural diversity. The women who, for whatever reason, choose to cover their hair, have become the focus of self-congratulation for members of Britain's current elites, a visible demonstration that (unlike, for example, France) this country prides itself in accommodating the idiosyncrasies of various faiths. (Although an exception is sometimes made for Christianity.) Arguments about the hijab's rationale or its consequences for social cohesion, or the connection between its recent spread and the growth in hardline Islamist ideology, are ignored or dismissed as weirdly French. Among high-profile commentators, only Yasmin Alibhai-Brown is prepared to take a more challenging line.

Although veiling has a long history in Islam, the hijab style of headscarf is very much a modern phenomenon. That does not, of itself, make it progressive: rather, its spread reveals how the conservative tendency within Islam is in the ascendant. It is part of the re-orientation of Islam globally in the directions of outward piety, moral conservatism and rejection of the individualism and moral libertarianism associated with the West. The measure of its success is that outsiders increasingly assume that it is the normal and expected attire of a Muslim woman. For those of an older generation, such as Alibhai-Brown, who grew up before there was such a thing as a "Muslim identity", it seems both reactionary and bewildering. But from the perspective of a partisan of multiculturalism, it is a useful signifier. Its popularity challenges Western cultural hegemony, for one thing. Above all, it says "different". Different is good. Promoting the hijab is a shorthand for promoting pluralism.

Hence, I think, the Hijab Arch. I have to admit that, if you wanted a symbol for the changes wrought by multiculturalism on our society, it would be hard to find a better one.