You've got to hand it to the C of E, they're always up for a bit of self-abasement. Usually it's just the genuflection towards Islam, fuelled by self-hatred and their touching belief in the uniform goodness of "faith". (Why is it the liberal, Gurardian-reading tendency who feel the most need to suck up to the woman-hating homophobes of the MCB? Is it because they feel obscurely guilty that the Muslims actually seem to believe in something? But I digress.)

At least Islam is a serious player. In Wales, Anglicans are now busy demonstrating their religion's similarity to Doctor Who. 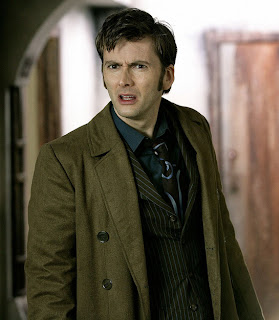 Listen to Fr Dean Atkins, the Cardiff cleric who is organising a Who-themed service at the Cardiff church where, fans will recall, Billie Piper travelled back in time to meet her dead father.

"Christ is a kind of cosmic figure as well if you like, somebody who does not travel through time but all eternity is found in him.
He is a kind of encapsulation of the beginning and the end, in fact he existed before time began and he will exist when time ends."

Any excuse to put bums on pews, I suppose. But it seems to the Heresiarch that Fr Atkins could go even further. There's the Doctor's penchant for regeneration. Is this not, "in a very real sense", similar to Jesus' trick of coming back to life. Except that it took JC three days to perform something Doctor Who seems to do with increasing frequency and remarkable ease. Is not each successive regeneration, in turn, a remarkably precise analogue with the Christian doctrine of Incarnation, an immortal being taking mortal flesh? Doctor Who has the Tardis, Jesus ascended to heaven on a cloud. Jesus had a disciple named Martha. The better known Mary Magdalene was famously an ex-prostitute; in a strange reversal, ex-companion Billie Piper can shortly be seen on our screens getting it on as a hooker.

One difference, though; Doctor Who fans tend to be a great deal more passionate than the postmodern sell outs of the C of E.
Email Post
Labels: Christianity Church of England culture Doctor Who religion sci-fi