Selling Downton to the Chinese 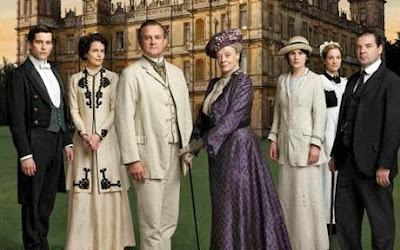 Are 160 million people really watching Downton Abbey in China, as George Osborne claimed on the Today programme this morning? Probably not. As Tom Chivers points out, the figure was a projection based on current trends. The show only started airing in China this year. But Chinese thirst for British costume drama seems real enough. A recent survey found that 9% of the discussion of foreign TV on Chinese social media sites concerned British dramas like Downton, while the proportion was significantly higher among graduates and white collar workers. British costume drama has the same snob appeal in China as it does in the United States, it would seem. In what is described as a "disdain chain", "British drama fans look down on fans of American shows, who look down on Korean soap fans, who in turn look down on fans of domestic dramas."

Two or three centuries ago, a rising British middle class went crazy for Chinese tea and porcelain. Now wealthy Chinese are returning the compliment: one in four Bentleys sold, for example, is now sold in China, while English public schools are setting up Chinese subsidiaries. Britain seems insular in comparison. It's hard to imagine sizeable chunk of the British public enjoying a weekly drama in Mandarin exploring the private lives of Chinese aristocrats during the dying days of the Ching dynasty. And if Osborne's 160 million figure remains aspirational, it does at least give a hint as to the sheer vastness of the potential gains to be made in the world's largest market.

There's no doubt that Downton Abbey is a phenomenon. Julian Fellowes' period soap continues to hook viewers worldwide despite its wooden scripts, its psychological superficiality and the contrived plots (including the recent attempt to liven things up a bit by having one of the best-loved characters gratuitously raped). It may not actually be a quality period drama: the show is, for all its leaden forays into attempted social realism, simply honest escapism. But it looks like one, and it capitalises on a well-established British niche. Last year, for example, it was among the most-watched TV shows in Denmark, the Netherlands, Singapore and Brazil, where it runs in a "slot dedicated to contemporary fiction", according to an executive at the network that broadcasts it. The global audience was estimated at 120 million even before transmission began in China.

British TV may have struggled in recent years to come up with anything capable of comparison (even unfavourable comparison) with The Sopranos or Mad Men, or with the slew of lugubrious Scandinavian cop shows, but slightly cheesy costume drama is the field in which this country remains the gold standard, even if Downton is no Brideshead Revisited.

So should we celebrate a great British success story, a stellar example of cultural soft power and an export triumph to boot? To some it may be a matter of regret that the world has yet to acquire a ravenous appetite for our more contemporary products - The Office was probably the last modern-set British TV show to strike a global chord, and that largely through national re-imaginings with local casts, languages and situations. But since the UK has cornered the market in nostalgia porn it would be foolish not to exploit it. The world clearly wants our frocks and boaters, our class system and our stiff upper-lips. "Theme park Britain" it may be, but at least it gives the country a strong and attractive international brand. If nothing else, it's good for tourism, even if the Home Office seems determined to drive potential tourists away with a a visa system that is expensive, bureaucratic and off-putting. And today's tourists might even become tomorrow's investors.

There are obvious dangers if the nation's image abroad (and perhaps its self-image too) is based on the past rather than the present or the future. The danger of looking irrelevant. The danger of not being taken seriously. Downton Britain is charming and traditional, but fatally unrealistic. In the series itself, Lord Grantham's essential appeal as an aristocratic paragon is bound up with his failing struggle to adapt to a changing world. He is romantically doomed, as is his miniature kingdom, to obsolescence. Is this the image of the UK that millions of international viewers are imbibing? Or is it the other way around, and Downton is successful precisely because it embodies and reflects an image that Britain has so far failed to shake off? Boris Johnson's Woosterish public persona also goes down very well abroad.

By contrast, attempts by the last government to rebrand the UK as "cool Britannia" largely flopped. National clichés die so hard that many visitors still expect to find London's streets clouded with fog and its countryside peopled with fox-hunting aristos. And for all the lip service paid to British pop culture as an antidote to the Brideshead/Downton effect our most popular and influential musical export is still the Beatles. Other British cultural exports with global appeal are of a similar vintage: think James Bond or Doctor Who.

So perhaps this country, despite all our vaunted hi-tech start-ups and cutting-edge research, is destined to be the world's leading purveyor of cosy nostalgia. There are worse fates. The 21st century belongs to China, and if Western countries are to have an economic future it will be through selling what China, and other rising nations, want to buy. And if that something turns out to be Downton Abbey it may be unfortunate for them but is great news for us.
Email Post
Labels: China culture economy George Osborne TV