So what is Paul Dacre playing at? 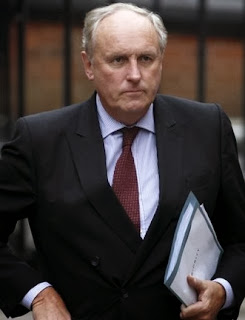 This week's Private Eye has an interesting (should you care about such things) item about the future of legendary Mail editor-in-chief Paul Dacre.  It reports that Dacre's incentive package was amended in 2010 from a five-yearly bonus to one in which he was to be paid "an additional £500,000 for each full year that he continutes working until he is 65".  We also learn that "his contract was also amended last year from a rolling one to 'the residual term until his 65th birthday on 14th November 2013'."

A big hint there that Dacre is being eased out.  The 65th birthday looks like an excuse, or a face-saving formula.  There's no reason why he shouldn't continue as editor after then, should he wish to and should his employers want him to stay on.  On the other hand, were he really ready to quit, why would he want to cling on until a symbolic retirement age?

Assuming this account is accurate (and the evidence for the Eye's story seems quite clear), it provides some context, at least, to Dacre's kamikaze-like behaviour in recent days.  It's not clear whether or not he personally decided to run the now-notorious article about Ralph Miliband, which might otherwise have passed without much fuss, under the headline "The Man Who Hated Britain". But there's little doubt that it was he who responded to the criticism from Ed Miliband with a trenchant refusal to apologise, indeed a determination to repeat and underscore the allegations about the Labour leader's Marxist father.  And the Mail's attempt to link the story with its campaign against press regulation certainly has Dacre's fingerprints all over it.  So what is he playing at?

It could well be a case of the devil coming in great fury because he knows his time is short.  Nothing to lose, now, after all.  Better to go down all guns blazing in a fight to the death with Ed Miliband than to just slink off to his retirement home.  His departure, even if postponed until November, will (at least in his own eyes) take on the lineaments of a martyrdom.  Perhaps he believes that he can bring Miliband, or the whole regulatory process, down with him.  Or perhaps it's simply his last hurrah for the Blackshirts.  Either way, he will be enjoying his final battle.

There's a risk here, of course, which is that Dacre's behaviour will hasten the dawn of Leveson-style regulation, by increasing Miliband's determination to accept nothing less (feelings of outraged filial piety now joining his longstanding desire to muzzle newspapers like the Mail).  Already, pro-regulation campaigners scent blood: the fury with which the Mail is now being pursued is somewhat opportunistic, however genuine the anger behind it.  They will not be appeased by securing Dacre's scalp (as it will inevitably appear); the removal of their most rabid opponent will be no more than a first step.

As Roy Greenslade has it:

In truth, the whole affair has blown up in Dacre's face because of his intransigence. The Mail editor has become the centre of a story that has legs.

In the process, he has achieved the reverse of his intentions. A dignified Ed Miliband has emerged with an enhanced image. As for press regulation, he has made it infinitely more difficult for the matter to be resolved in favour of the system he favours.

But perhaps Dacre doesn't really care, and this last campaign is part of a scorched-earth policy.  There's said to be little love lost between Dacre and the man often touted as his successor, Mail on Sunday editor Geordie Greig.  Greig himself today issued an abject apology for one of his reporters gatecrashing a memorial service for Ed Miliband's uncle.  He was insistent that he had nothing to do with it (but then who did dispatch the reporter without his permission?  One of Dacre's minions?).   The subtext to Greig's grovelling is presumably to signal that the Mail under his control will be softer, gentler affair, a labrador puppy to Dacre's pitbull; and no doubt there's also a hint of panic that the scandal might cost him his long dreamed-of prize.

Ed Miliband, meanwhile, has gone over Dacre's head to the present Lord Rothermere, demanding a thorough enquiry into the ethics of the Mail.  Such an enquiry could only satisfy by presenting the Labour leader with Dacre's head on a platter.  But if Dacre is leaving anyway, the sacrifice can only be a symbolic one.  Unless, of course, it gives Rothermere a most convenient opportunity to remake the Mail's image by loading all of its sins onto a scapegoat, who will then be cast out into the wilderness with only a vast pension to sustain him.  Or unless Dacre has raised the stakes so high that his departure now would look too much like a victory for the supposed enemies of a free press.  In which case the plans for his retirement might have to be revisited, and Rothermere (and the whole country) might be stuck with him for logner than originally expected.  Who knows?
UPDATE: The Press Gazette is reporting that Dacre is staying on for another twelve months at least, having agreed a new contract. It's not clear when he negotiated this. In any case, it puts paid to any "scorched earth" theory, but I doubt the timing is entirely coincidental. Perhaps his new lease of professional life has gone to his head.