All the nice girls love Osama 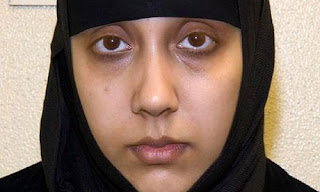 A great deal has already been written about the soi-disant Lyrical Terrorist (terrible lyricist, more like) Samina Malik, whose poems in praise of beheadings and martyrdom have earned her the dubious distinction of becoming the first woman in Britain to be convicted of terrorism-related offences. And yes, there are important debates to be had about the restrictions on free expression posed by laws which make the writing of ill-advised verse and the possession of "terrorist materials" easily available online an offence punishable by up to ten years in jail. Clearly, this confused and angry young woman was no danger to anyone, and by making a martyr of her the authorities are hardly likely to do much to break down the mistrust felt by many young British Muslims.

That is not, of course, to dismiss lightly the unpleasantness of her verses. Here's Samina on "How to Behead", for example:

Strong stuff. But hardly more than a lot of the doomy, sex-and-death obsessed outpourings of adolescent goths. Indeed, take away the Islam and Samina Malik is hardly distinguishable from any number angst-ridden, alienated, solipsistic teenagers. Alright, she's 23 and might perhaps be considered a bit old for this sort of thing. But people grow up at different rates. Before she discovered radical Islam, Samina was into gangsta rap and found her inspiration in the likes of Tupac Shakur and 50 cent. Plenty of violence, misogyny and homophobia in rap lyrics, of course: some campaigners would want those to be banned. But we're hardly talking about terrorist masterminds.

In her defence, Samina Malik claimed that she adopted her Lyrical Terrorist moniker because it "sounded cool", and that her expressed desire for martyrdom wasn't meant seriously. Moreover, she had only posted her attempts at poetry (which her defence counsel ludicrously compared with the works of Wilfred Owen) on the web to attract prospective bridegrooms. Now there's a thought. There's a word for people like Samina. But it isn't terrorist, or even wannabe terrorist. It's groupie.

Samina might have looked like the picture of Islamic modesty in her hijab, but beneath the demure exterior her hormones were clearly raging. And what better catch, for a girl dreaming of global jihad ("The desire within me increases every day to go for martyrdom," she scrawled on one piece of paper unearthed by the police) than a real live (for the moment) suicide bomber. Clad, as she was in court, in figure-hugging jeans to go with her designer hijab, Samina was a vision of top terror totty. Similtaneously submissive and filled with passion for the cause, she's a jihadi's wet dream. No need to wait till the afterlife for the promised 72 virgins.

I wonder how many more Saminas there are out there, thinking impure thoughts about Osama bin Laden or Rage Boy, looking forward to loosening their veil for a guy with a beard and half a pound of semtex. The rappers who stirred Samina's loins in the days before she found Religion are never short of gorgeous young women to join their cocaine-and-sex parties: why should the heroes of the Islamic revolution fare any worse? 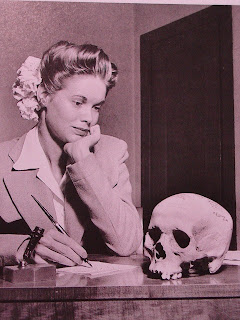 Soldiers have always been attractive to women. In wartime, moreover, women have often been expected to keep the home fires burning while the men go off to fight. What's the difference, after all, between Samina's beheading fantasy and this real-life momento mori which appeared in the pages of American Life Magazine on May 22, 1944? The woman, Natalie Nickerson, was the proud recipient of the skull of a defeated Japanese soldier thoughtfully sent by her fiancé. "I said I'd get her a dead Jap and I'm as good as my word", he explained. She certainly looks pleased.
Email Post
Labels: civil liberties gender politics Islam moral panic religion Samina Malik sexuality terrorism

what if she was a white woman writing about satanic dreams and her wishes to turn to a vampire and feed on people's blood?

Rus Bowden said…
On Clattery MacHinery on Poetry, there is a call for poetic license, for freedom: