There were some ugly scenes in Oxford yesterday as protesters tried to disrupt a debate at the Union about free speech. They almost succeeded. Police not only failed to stop activists invading the debating chamber, they also kept out many genuine ticket holders. A typical triumph from the boys in blue. As it was, the event went ahead, in a reduced format, after a delay of over an hour and a half. The controversial speakers, BNP leader Nick Griffin, and David Irving, best known for his admiration for Adolf Hitler, made their points and were duly challenged. It is unlikely that anybody's mind was changed. But that wasn't really the point. The point was that the debate took place at all.

Union President Luke Tryl has been accused of merely seeking publicity for himself and his organisation, and of providing a platform to two men whose views have brought them into trouble with the law. This was, say opponents ranging from Michael Howard (Peterhouse, Cambridge, ex-president) to former NUS president and new equality supremo Trevor Phillips, irresponsible. It compromised security and gave a platform to extremists. It was little more than a stunt.

Irresponsible? We're talking about students. What do people expect? I could tell you stories about "irresponsible" students who are now on the front bench.

Noted activist Peter Tatchell has been taking a similar line at Harry's Place.

Support for free speech does not oblige the Oxford Union to reward these men with a prestigious public platform, which will give them an air of respectability, raise their public profile and allow them to espouse their intolerant views. It is helping them propagate their bigotry. Not offering hate-mongers a platform is not the same as banning them. Hundreds of topical public speakers and first-rate debaters never get invited to address the Oxford Union. They are not being censored.

Not offering hate-mongers a platform is not the same as banning them? In other words, free speech is all very well just so long as we don't allow people to speak freely.

Of course the Oxford Union were under no obligation to invite Irving and Griffin. But they had every right to do so. They're entitled to free speech too.

Like them or not, Griffin and Irving have a high public profile. And at least a large part of that profile is due, paradoxically, to the attempts both legal and institutional to silence them. They are able to present themselves as martyrs for free speech only because that is what they are. If events like last night's at Oxford weren't so rare, so controversial, or so guaranteed to require a heavy police presence, then maybe, just maybe, fewer people would be interested in hearing these wearisome individuals.

As it was, they were the hottest ticket in town.

And the rumpus only succeeded in confirming Griffin's and Irving's self-image as free speech martyrs. Griffin's jibe, that the protesters would have made "perfectly good Nazis", was in typically poor taste, yet not without a certain force. A mob is a mob, however good or pure its intentions. And a mob puffed up with a sense of its own moral self-righteousness is possibly the most dangerous mob of all. Some in the crowd even shouted "Kill Tryl". I'm sure they did so with Tarentino-inflected irony, but even so the Voltairean principle was neatly inverted. I disagree with what you say, and will threaten to kill you if you assert your right to say it.

The sight of George Galloway, who now leads a rump of his former Respect party dominated by radical Islamists, didn't exactly redound to the protesters' advantage either, I wouldn't have thought. Galloway knows a thing or two about intimidation. He's a champion of free speech only so long as it's his own, as anyone who's ever tuned in to his self-glorifying "phone-in" show on TalkSport will recognise. 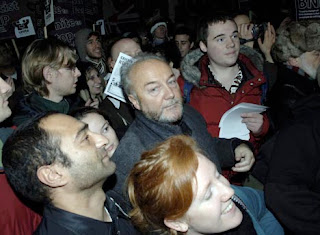 We care about freedom of speech, don't we? It's one of the "British values" that Gordon Brown wants us to celebrate, part of the great liberal western inheritance of the enlightenment. It separates us from all those North Koreas and pre-conquest Iraqs and (say it sotto voce) Saudi Arabias. It's what our forefathers spilled their blood for. Even Trevor Phillips agrees with that:

People have died for freedom of speech," he told the BBC on sunday. "They didn't fight and die for it so it could be used as a silly parlour game."

So freedom of speech only matters if you're being responsible, does it?

A Voltairean defence to the death of free speech is asking a lot these days, of course. But it would be nice to have it defended at all. Politicians pay lip service to free speech as an ideal even while seeking to hedge it around with ever more restrictions. The present government has legislated against incitement to "religious hatred", "glorifying" terrorism, and now seeks to add incitement on grounds of sexual orientation to the list. Samina Malik was prosecuted for poems celebrating suicide bombers. 82 year old Walter Wolfgang was ejected from the Labour conference and questioned by the police - under the Terrorism Act - for shouting "rubbish" at Jack Straw. Author Lynette Burrows was questioned under "hate crime" legislation for publically doubting the desirability of adoption by gay couples. A controversial opinion, in that it offends against the canons of political correctness, but so a few decades ago have been its opposite.

The right to speak freely has been replaced, surreptitiously but almost entirely, with the right not to be offended. And "offence" can't be objectively defined; it is (as the law recognises) purely in the mind of the offendee. And as the government increasingly polices public utterance, it polices thought.