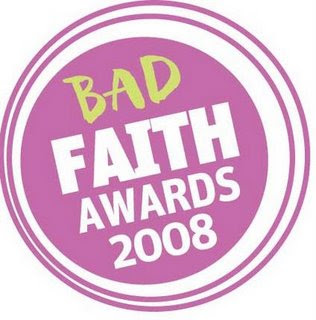 Last year someone controversially nominated Richard Dawkins, on the grounds that he was attempting to turn atheism into a religion. This strange idea crops up with increasing regularity. Geoffrey Alderman in the Guardian said recently that "Like any other religious group, atheists have every right to promote their wares, and to gain converts to their beliefs". He went on to describe atheism as "a sectarian, charismatic faith that seems to promise an end to life's tribulations if you embrace it. A drug, in fact." That's almost worth a nomination by itself. There's no atheist faith. Atheists believe in all sorts of different things: it's just that none of them happen to be God.

The smart money was on Ratzinger, but he was pipped at the post by US conservative columnist Dinesh D'Souza for remarks he made about the Virginia Tech college shooting:

Notice something interesting about the aftermath of the Virginia Tech shootings? Atheists are nowhere to be found. Every time there is a public gathering there is talk of God and divine mercy and spiritual healing. Even secular people like the poet Nikki Giovanni use language that is heavily drenched with religious symbolism and meaning.

Richard Dawkins, he noted, had not been invited to address the grieving community. Which just goes to prove that atheism isn't a religion after all. Sorry, Geoffrey.

This year, distinguished non-believers will be putting forward their nominations (9 in total) in podcast format. But New Humanist's Paul Sims says he's still open to suggestions. First off, notorious eucharist-defiler PZ Myers on why he hates Sarah Palin. Blah blah witch-detector, blah blah creationism, blah blah abortion, blah blah. Can Palin really be said to have advanced the cause of religion, though? Quite the opposite I'd have thought - though we won't know for sure until Wednesday morning.

Ratzo has to be a strong contender again. Take the news, revealed by Damian Thompson, that the Vatican is now using psychological questionnaires to weed out applicants for the priesthood with "homosexual tendencies". Not practising gay men, notice: according to a report approved by the Holy Father and released on Thursday, "in assessing the capacity for celibacy... the church needs to evaluate a seminarian's sexual orientation". Why do they think a man with same-sex tastes would have more difficulty keeping his cassock done up than one who liked women? What does this say about the church's belief in forgiveness and grace? Would Joseph Ratzinger have passed such a test? Shocking.

Who else? Well there's Rowan Williams for his Sharia speech, obviously. Andrea Williams and the Lawyers' Christian Fellowship have had a good year. Also a shout out for Hazel Blears, who is busy giving so-called Muslim "community representatives" an official role in government, supposedly as a means of avoiding radicalisation. As David T of Harry's Place eloquently argues,

We should stop treating British people as if they were members of a confessional group, stop trying to mediate the State’s relationship with them through self appointed, and often very politically extreme religious and “community leaders”, and appreciate that true multiculturalism is something different than what Amartya Sen calls “plural monoculturalism”.

...Not only is this terrible politics: it utterly sells out British Muslims, and the citizens of this country in general.

I would also give a dishonourable mention to Cristina Odone for her defence of faith schools in a bizarre report for the Centre for Policy Studies, in which she described sectarian schools as a "bridge between their religious communities and the wider secular society" and anyone who disagreed as an "anti-religion bigot". In an accompanying article, she claimed that Islamic schools were "crucial in the emancipation of Muslim girls". I dealt with her here.

From Islam itself there really are too many to mention. But spare a thought for Saudi Arabia's hilarious Sheikh Muhammad Al-Munajid, who among other wise public utterances claimed that the costumes worn by female athletes at the Olympics constituted "an enormous Satanic issue". He followed this up with a fatwa calling for the death of Mickey Mouse. "The mouse is one of Satan's soldiers and is steered by him" he explained. And I thought it was just pigs they didn't like. And dogs.

Anonymous said…
Its far from a strange idea if you still believe in Poppers Falsification theory as the bedrock of scientific understanding.
2 November 2008 at 12:19

Anonymous said…
My nomination goes to Obama for belonging (for most of his life anyway) to the most racist, ignorant church in the United States, and to the press who are quick to jump on Palins religious thoughts but cant be bothered with Bams sins.
2 November 2008 at 12:23

Anonymous said…
Face facts Vald, Bam for most of his life has been at one with the witch doctor, he has now defaulted to the Bush position of true believer and apart from his position on abortion (although hes in favour or CP) he is "in god we trust type of guy.

Cannot be bothered responding to your sexism towards Palin, your hatred for republicans clouds your better judgment.