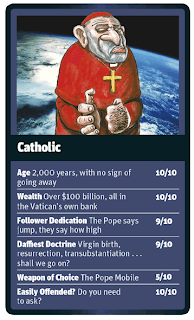 The game of God Trumps has proved a big hit over at New Humanist. Devised by Christina Martin and illustrated by Martin Rowson, it pits some of the main religions against each other in several categories such as age, wealth, "daffiest doctrine" and how easily offended they are. The point of the latter, of course, is that taking offence has become one of the primary means by which religions assert their power in the world today. I would have added a category for clothes - which would have handed an easy victory to the Catholics (and, by the way, as any fule kno the Catholics' weapon of choice is holy water. Or possibly thumbscrews). But, still, brilliant. Have a look at them all (when you've finished reading this, of course).

All tremendous fun, but at the risk of being accused of taking a joke too seriously (as I was over my very popular John Sargeant post) it seems to me that it does also capture an essential if politically incorrect truth about the world's religions - which is that, at some deep level, they really do hate each other. They're very polite about it, of course - these days, it's all couched in the cuddly language of mutual understanding and respect. And they're quite happy to join forces against the manifold evils of secularism and demand respect for each other's symbols. They share many common truths, like a hatred of women and gay people and a belief that most things are best decided by men in robes. But the alliance is largely a tactical one, prompted by the need to retain market share in what is - at least in the developed world - a declining market. The impulse that produced the Crusades and the wars of religion is still active.

Take our old friend Pope Ratzinger. In recent weeks, he has entertained a high-powered group of fatwa-merchants in the Vatican - an encounter that led to a communiqué which promised, among other things, "a permanent Catholic-Muslim committee to coordinate responses to conflicts and other emergency situations". And perhaps other matters of common interest - sexuality, blasphemy, lawmaking - might eventually come within the remit of such a committee. Point 7 of the communiqué stressed the idea common front against the enemy of secularism:

As Catholic and Muslim believers, we are aware of the summons and imperative to bear witness to the transcendent dimension of life, through a spirituality nourished by prayer, in a world which is becoming more and more secularized and materialistic.

Yet what's this? The New York Times reports that Ratzinger believes that inter-religious dialogue is "impossible". In a letter printed in an Italian newspaper - addressed to a politician who has written a book about the importance of Europe's Christian heritage, one of the pope's personal hobby-horses -

the pope said the book “explained with great clarity” that “an interreligious dialogue in the strict sense of the word is not possible.” In theological terms, added the pope, “a true dialogue is not possible without putting one’s faith in parentheses.”

Reuters' Tom Heneghan thinks that Ratzinger was merely being Germanically pedantic in his choice of words. Like Humpty Dumpty, when the pontiff uses a word it means what he wants it to mean, and dialogue, in the "strict sense", refers to a process intended to produce agreement. You can't have dialogue if there's no possibility of agreement - of the Muslims accepting the divinity of Jesus Christ, for example, or Catholics re-orienting their churches to face Mecca.

But Haneghan is being equally Humptyish by insisting that Ratzo's use of words merely reflects professorial desire for precision. Because, of course, he is really saying something rather significant. What he's saying, and saying very definitively, is a reassertion of the idea that the religions of the world are not, after all, essentially the same. The John Lennon position, if you like, that what the great teachers taught was true but then along came the priests and the theologians and introduced unnecessary qualifications. As Haneghan goes on to make clear:

He’s not starry-eyed about interreligious dialogue, especially with Muslims, because he thinks it can lead to a blurring of the very distinctions he’s trying to make. Deep down, he also thinks Christians ultimately can’t discuss theology with Muslims because their views of God are too different.

He's right, of course. It never ceases to amaze me that the pope is expected to be some sort of spokesman for inter-religious harmony. That's not his job. His job is to defend and protect Christianity in general and the Roman Catholic version of Christianity in particular, to assert the church's age old claim that it alone has the truth, the means of salvation and the keys of the kingdom of heaven. In a less mad world we would be surprised if the pope did not express the view that all other religions were falsehoods. Even Ratzinger doesn't go quite that far, of course, only reserving that level of scorn for Protestant churches. In his famous speech at the University of Regensberg a couple of years ago the pope wondered what good Islam had brought to the world: a fair enough question, I'd have thought, for someone who is professionally bound to assert that Jesus represented God's most significant message to the human race. Yet he was excoriated, not merely by the usual rowdies who thought he had "insulted Islam" but by moderates on all sides - even agnostics - who thought that he was being unhelpful to the great cause of inter-religious understanding.

Why is it so widely believed - by religious and non-religious people alike - that religions ought to get along? After all, no-one expects Israel and Syria to get along, or Microsoft and Apple. Two reasons, I think. Firstly, because the major religions, despite their radically differing beliefs, have been subject to a process of convergent evolution. Only in their early days, or on their margins, have they been engaged in cut-throat competition for believers: in most places, at most times, there has been a prevailing religion, and whether it is Islam, Christianity or Buddhism it has provided the focus for both spiritual life and moral conservatism. Spirituality and "family values" morality are constants of human life, which do not disappear (despite appearances) even in societies that are avowedly secular. So when the major religions sit down and chat they will find they have a lot in common, and imagine that these similarities are shared truths about religion, rather than universal truths about the human condition.

The second reason lies in the religious impulse towards "oneness". Most religions have at their core some sort of mystical experience, in which the mystic feels a union with the cosmos. At a more institutional level, most religions emphasise such things as the community of believers, the omnipotence and transcendence of God or the universal applicability of the ethical teachings. Some sects - the Jehovah's Witnesses, for example - positively revel in their minority status and gleefully anticipate that anyone who doesn't join them will go to Hell. Almost by definition, however, such groups do not become majority religions. So you're left with a group of major religions that are predisposed to believe that unity is a desirable or attainable goal.

Yet if religions are all basically the same, then why should anyone believe in the truths of one in particular? It is the details that religions do not share - the Bible, the Koran, the teachings of Buddha - that give authority to the teachings that they proclaim that are shared by all religions, and serve to explain the spiritual experiences that are the common currency of humanity. I'm not in the religion business myself, of course, but if I were I think I'd advise a spirited game of God Trumps over feel-good inter-religious cosiness every time.
Email Post
Labels: catholicism Pope religion

Saltburn subversives said…
They seem to have forgotten socialism and environmentalism, both a good deal more dangerous than the faiths mentioned.
26 November 2008 at 19:44

WeepingCross said…
Blimey, I feel more than half-inclined to post this round all the Anglican theological colleges.
27 November 2008 at 18:43

Anonymous said…
Wow! I missed God Trumps; now I must get a set for an amiable Methodist lay preacher at my office. I used to love Top Trumps - Fighters, Warships... (Wipes away tear, dunks HobNob.)

Slightly more seriously, you're right about religions hating each other. Look at the way various Christian sects behave over the Holy Wotsit in Jerusalem. Pure loathing and plenty of punch
27 November 2008 at 19:53

Anonymous said…
fabulous, fabulous, many thanks for the link - can i recommend Rowson's wee book The Dog Allusion also?

As for religions hating each other, the worst hatreds are within the religions, as the judge in the New Testament says 'see how these Christians love one another'. And see also how these Muslims love one another, in this report from the estimable BBC correspondent in Pakistan -