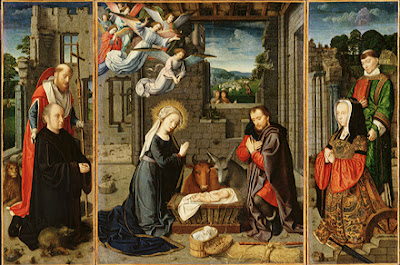 Christmas wouldn't be Christmas without the ritual religion survey. This year's survey for think tank Theos tell us, among other things, that just over a third of the population believe in the Virgin Birth - or at least are willing to assent to the proposition that "Jesus was born to a virgin called Mary". Slightly fewer - 28% - believed Luke's story of shepherds being visited by angels. A more substantial 56% agree the Jesus was born in Bethlehem.

Another survey publicised on Radio 4 this morning, and conducted on behalf of a London church, found that 70% of people questioned - including a quarter of professing Christians - "doubted" the traditional account. In addition, "more than a fifth of Christians who answered said they did not believe Jesus was both God and Man - another central tenet of Christianity." Which indeed it is, albeit a notoriously complicated and incomprehensible one.

Put the two surveys together and you get a picture of around a third of the population who purport to accept many of the implausible mythological and miraculous elements of the traditional Christian story. Many of these people will not be regular church-goers, and are unlikely to exhibit many other symptoms of religiosity. Others will be Muslims, who are also supposed to believe in the virgin birth of Jesus, or possibly even Hindus, for whom the belief is, I understand, perfectly acceptable. But the majority are unlikely to have given the matter much thought, and are merely regurgitating things they learned as children.

Scepticism about the basic elements of the Christmas story is not necessarily the product of ignorance, or even of irreligion. Sometimes the very opposite may be the case. Take, for example, Jesus' birthplace. Everyone - well, almost everyone - "knows" that Jesus was born in Bethlehem. If all you know of Christianity is some half-remembered childhood nativity play or Christmas carol, then you know that Jesus was born in Bethlehem. It actually requires some acquaintance with the historical background and with modern scriptural analysis to appreciate that this might not in fact be the case.

In reality, many scholars argue that the tale of Jesus' birth in Bethlehem was invented to fit Old Testament prophecies that the Messiah would be born there. Luke's gospel explains the presence of Mary and Joseph in Bethlehem as being a consequence of a census of the entire Roman empire - a census for which there is no historical evidence. He also says that the census took place while Quirinius was governor of Syria. Quirinius was appointed in 7AD, when Jesus would have been at least ten. And John's Gospel contains the following rather embarrassing verse: "But others said, shall the Messiah come out of Galilee? Hath not scripture said, that the Messiah cometh of the seed of David, and out of the town of Bethlehem, where David was?" (7,41-42)".

It's pretty clear that the story that Jesus was born in Bethlehem was invented to answer the criticism raised by those "others" that a proper Messiah had to come from that town, and that Luke's mistimed and indeed nonsensical census story was a clumsy attempt to give the idea some sort of plausibility. Almost every aspect of the Christmas story is open to challenge along similar lines. The massacre of the innocents - Herod's attempt to wipe out all the children in Bethlehem - is not recorded by the main historian of the period, Josephus, although he doesn't hold back when it comes to describing Herod's other crimes. Some have detected similarities between Matthew's account and Herodotus' description of events surrounding the birth of Cyrus the Great of Persia (an account which is also highly unlikely to be literally true). The donkey on which Mary supposedly rode to Bethlehem is pure sentimental invention - though it may have been inspired by the donkey that the gospels describe Jesus himself riding into Jerusalem. The shepherds abiding in the fields, the visit of the Magi, the innkeeper - these are elements of the story that owe as much to folklore as to the Bible.

The familiar nativity story combines the accounts of Luke and Matthew, details plucked randomly from other parts the Bible (the ox and the ass, for example, come from Isaiah), parts of apocryphal gospels that never made it into the official Bible and two millennia of speculation and legend. All this has been an open secret for years, shared only by thoughtful believers and unusually well-informed non-believers. Yet it hangs together - as a myth - with remarkable elegance. The official Biblical versions, in comparison, can seem rather disappointing. "Magi from the east" sound exotic but rather vague. The Three Kings, with names and personalities, have rather more potency.

In its fully-developed, medieval form the Nativity is an emotionally engaging myth which combines theology (the Incarnation) with human interest, fairy-tale motifs (eg the usurper's attempt to kill the rightful heir), magical elements (a moving star), oriental opulence (the gifts of the Magi) and a clear moral message. It reached its apogee with the invention of the Christmas Crib, ascribed to St Francis of Assisi. It began to unravel when the Reformation put an emphasis on the words of the Bible and to downplay the story in favour of the theology; post-Enlightenment scepticism simply blew down an already ramshackle structure. It leaves today's Christians stuck with a few basic Biblical "facts" - such as the virgin birth - which without the supporting cast of shepherds, stables, donkeys and camel-riding kings look rather exposed.
Email Post
Labels: Christianity Christmas Church of England history religion

Mikey said…
About 20 years ago, I attended a lecture by Enoch Powell. He spoke for 50 minutes without any notes on his efforts to translate Matthew's gospel from Greek, as well as other analysis he had undertaken on the Nativity story. He said that much of the traditional story was inaccurate, partly due to mistranslation. For example, he maintained that there was never a stable; Jesus was in fact born inside a house, although it was possible that he did lie in a manger.

WeepingCross said…
It's also interesting that we've actually lost bits of the full-scale medieval nativity story, like the tale of the good and bad midwives, which everybody in the Middle Ages would have recognised. You can't include a woman's hand withering after she tries to check if Our Lady is still a virgin in a primary school nativity play. Not without the police paying a call.

I go along with your Grace until the remark about the Reformation. I'm not sure the Reformers were very interested in the theology of the Incarnation: they were Atonement enthusiasts, by and large. And I don't really get what you're finally driving at. For a believer who's historically-minded, the mystery that needs solving is the fact of the Church's faith, and then you work back from that.

valdemar said…
I agree, Father W - it's a wonderful story. Let the Shepherds mumble and the Wise Men stumble, and let all the little Marys hold their Jesus dolls the wrong way up, untroubled by anything except remembering their lines. Dragging in religion just spoils things.
20 December 2008 at 18:34

Unknown said…
I was amused this morning when my son (7) wandered into the kitchen as I was tucking into my boiled egg (with toast soldiers, of course).

"Do you believe in the christmas story daddy?"

And, with that he wandered out.

WeepingCross said…
The angels are the most plausible element of the lot. When he's older that'll be clearer.
21 December 2008 at 22:53

Anonymous said…
I just heard tale of a next door neighbour's son recently learning the truth of Santa - at 11 years old - and being heartbroken, which compared with your skpetical 7 year old is a perfect example of the spectrum of faith we have today.

The thing that strikes me about the nativity, as all christian scripture i guess, is how little sense it all makes as a story. Authors like Chaucer, Shakespeare or even Tolkien have a much more consistant and rational moral sense. The gospels seem a series of random events in comparison.
22 December 2008 at 16:40