One of the heartening aspects of Greengate, as I suppose one may call it, has been the unexpected chorus of voices speaking out on behalf of the ancient privileges of Parliament, so little considered by the Metropolitan Police (or, indeed, the Commons authorities themselves). The sainted name of Mr Speaker Lenthall, who told Charles I to get lost (though in rather more elegant language) has been much bandied about these past few days, as dewy eyed scribblers rediscover finer points of 17th century politics previously known only to Tony Benn. This picture has been reproduced many times. Perhaps the media-political elites have all been as transfixed by The Devil's Whore as they once were by The West Wing. 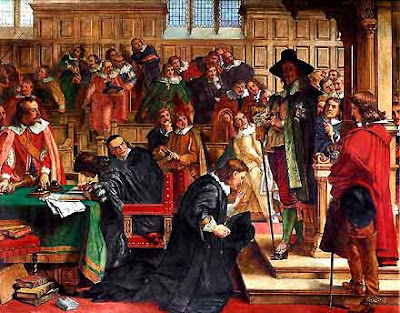 Tories, obviously, have been furious at the insult done to one of their own. But so to have many others on all sides of the House. The Lib Dems' Vince Cable, the sage of Twickenham, got the biggest round of applause of the night on Any Questions last Friday when he denounced the police action as "an outrage". Even Labour voices have been heard. For example, the former Europe minister Denis MacShane this morning joined the fray. Writing in the Telegraph, MacShane speaks eloquently of the democratic traditions of Parliament now being undermined by the police raid on Damian Green:

Defining parliamentary privilege is not a matter for the Speaker, or the Clerks who advise him. Defending the rights of British citizens, who until last week complacently believed that what they told or sent to their MP would remain confidential and not be seized by the police, is a matter for all Members of Parliament.

We defend our privileges not to be self-important or to defame our foes, but as a vital democratic defence of the rights of a free people in a country that lives under rule of law, not under decisions of the police.

MacShane goes on to describe last week's events as "a mammoth breach in the core democratic doctrine of parliamentary privilege" and to demand that, when the Commons returns on Wednesday,

The Speaker must make clear that never again will the police or any other agent of the state enter into an MP’s offices and seize papers unless there is clear and overwhelming evidence of serious criminal, not political activity.

Tomorrow he must make clear that what happened was wrong and will never happen again. If not, then the Commons must assert its rights on behalf of the people who send us to Parliament.

Stirring words. And MacShane rightly identifies the sensitivity of the MP's role - especially when guarding the confidences of constituents - as the most important justification for Parliamentary privilege:

We have no written constitution and no statute of MPs or law of parliamentary privilege. But over the decades, if not centuries, the MP has become a special person in our way of life. He is expected to raise issues and be ahead or sometimes behind fashion in a way that can provoke admiration and anger in equal measure. The MP in the Palace of Westminster (where the laws of the land do not apply, as it is a royal palace) has to be able to meet anyone, discuss anything, and keep on paper or electronic file information that remains confidential to the MP.

The question may validly be asked, however, whether MacShane has been altogether consistent in his support for Parliament and (especially) parliamentary democracy. As Europe minister, he played a leading part in the negotiations which led to the European Constitution and its successor, the Lisbon Treaty, both of which represent huge strides towards the replacement of national democracies with rule by bureaucrats and politicians meeting, often as not, behind closed doors.

When the Irish people rejected the treaty in a referendum, MacShane had this to say in the Times:

No EU treaty can come into force until all signatory nations ratify it. But Ireland represents 1 per cent of the EU's total population and some old-fashioned democrats may feel that 1 per cent does not outweigh the rest of Europe's nations which are saying “yes” to the treaty.

Conveniently ignoring the fact that, unlike the population of the rest of Europe, the Irish had actually been asked.

But of course, "Parliamentary sovereignty" was an issue here too: Parliament, after all, had "debated" the Lisbon treaty before it was rubber stamped by a whipped vote. Indeed, he used that very argument in a piece he wrote in the Observer in August 2007:

The new Prime Minister has spurned the plebiscite populism of Tony Blair and said that Parliament should be the focus of decision-making on Britain's international treaty relationships with Europe. Cameron is hoping to defeat Brown by forging an anti-Brown coalition of Tory, Lib Dem and Eurosceptic Labour MPs to force through a referendum on the new EU treaty and defeat Brown's insistence on the primacy of Parliament.

So is Brown's pledge to listen to the people best dealt with through a populist referendum on the EU treaty? We should be happier that he is poised to restore authority to the Commons. Brown appears to take Edmund Burke's view that Parliament exists to settle the international policy of the nation.

Edmund Burke's is not a name to trifle with. In his most famous comments on the nature of an MP's duty, his 1774 address to the voters of Bristol, Burke declared that the Parliamentarian's highest duty was to exercise his judgement on behalf of his constituents - even if that meant voting contrary to their wishes:

Certainly, gentlemen, it ought to be the happiness and glory of a representative to live in the strictest union, the closest correspondence, and the most unreserved communication with his constituents. Their wishes ought to have great weight with him; their opinion, high respect; their business, unremitted attention. It is his duty to sacrifice his repose, his pleasures, his satisfactions, to theirs; and above all, ever, and in all cases, to prefer their interest to his own. But his unbiassed opinion, his mature judgment, his enlightened conscience, he ought not to sacrifice to you, to any man, or to any set of men living. These he does not derive from your pleasure; no, nor from the law and the constitution. They are a trust from Providence, for the abuse of which he is deeply answerable. Your representative owes you, not his industry only, but his judgment; and he betrays, instead of serving you, if he sacrifices it to your opinion.

It is twisting Burke's fine words more than a little, though, to apply them to the modern MP who, unless a serial rebel, is more interested in keeping the good opinion of the party whips than in the views of his or her constituents - and rarely if ever has much recourse to independent judgement. But then I doubt Burke would have had much enthusiasm for the EU, somehow, and certainly not for the railroading of bills through a neutered Parliament, judging by statements like this:

Government and legislation are matters of reason and judgment, and not of inclination; and what sort of reason is that, in which the determination precedes the discussion; in which one set of men deliberate, and another decide; and where those who form the conclusion are perhaps three hundred miles distant from those who hear the arguments?

Back to MacShane's Times article about the Irish No. "Many countries", he maintained, "have voted not once but twice for a new EU rule book. They will be sore that the French and the Dutch, and now the Irish, have blocked new rules deemed necessary to make Europe work better."

MacShane's high view of Parliamentary sovereignty - as something that is not to be sacrificed to police high-handedness or popular stupidity, but may validly be ceded to Brussels - seems also inform his approach to civil liberties. According to They Work For You, MacShane has,

Indeed, when David Davis resigned on a matter of principle and asked the voters of Haltemprice and Howden to re-elect him, MacShane condemned his action as "degrading Parliamentary sovereignty".

The MacShane view, in summary, seems to be that Parliamentary sovereignty is a thing in itself, which may validly trump or even be opposed to the sovereignty of the people. Parliamentary sovereignty, without popular support, is either meaningless or represents a conspiracy against democracy - because Parliament, whipped and sidelined, has in recent years done a poor job of holding the executive to account. Rather than representing their constituents to the government, which is supposed to be their job (the job Damian Green was doing quite effectively when he had his collar felt) Labour MPs often see their role as representing the government to their constituents. It is this that has of course led to a catastrophic decline in the image of MPs - something that may have let the plods think they could get away with their abuse of Parliament. For all Denis MacShane's fine words this morning, he is part of the problem.