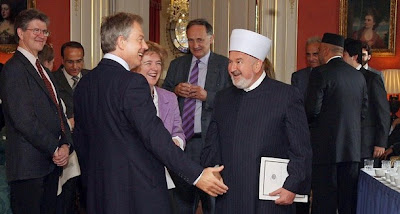 The Observer have been taking a look at the accounts of the Tony Blair Faith Foundation. And very interesting they are too. The report tells us that the fund received £3.6 million during its first year to spend on its various projects, which range from getting churches and mosques to distribute mosquito nets (though what special expertise religious organisations are supposed to have in that area escapes me) to funding student scholarships. In fact, the quoted figure is almost a year old - the accounts date end April 2008. According to the write-up on the foundation's website, the report "is first and foremost the story of beginnings and preparation, a year in which, in many ways, the current fast pace of progress and change is only adumbrated and barely glimpsed". I suppose that means the foundation now has far more money to spend.

The report comments wryly that "while many charities are having trouble raising funds, not to mention attracting the suitably connected personnel necessary to achieve their goals, the Blairs are encountering no such problems" (Cherie has her own foundation). So where's the money coming from? Much of it, according to "speculation", comes from "wealthy benefactors in the Middle East". That could mean many things, of course, but is mostly likely to mean the rulers of oil-rich Gulf kingdoms and the like, with whom as PM Blair always cultivated close relationships. The present king of Saudi Arabia, coincidentally, has been active in promoting "inter-faith" activities at the UN and elsewhere, though rather less so in his own country, where Wahhabi Islam remains the only legally permissible religion. The king convened a conference last year which Blair - a prominent attendee - hailed as "bold, courageous and potentially far-reaching".

If the Blair Foundation (BlairFaith?) is indeed getting funding from the Middle East in such a sensitive area this must raise serious questions about the foundation's objectivity. Among its aims, for example, is an ambition to improve religious literacy" through the production of "'high-quality educational resources' that will be distributed in UK schools". On the website, we learn that they intend "to identify the best resources and practices from across the world and ensure that these are made visible and accessible to all." Which sounds perfectly reasonable: but can we be sure the foundation's paymasters will have no influence whatever on the content of these educational materials?

The line between the religious and the political has become increasingly blurred recently, as the events of last week have amply confirmed. And it's part of the explicit purpose of BlairFaith to connect the spiritual and the temporal internationally. According to the foundation's mission statement, "to promote respect and understanding about the world's major religions and show how faith is a powerful force for good in the modern world." Not respect and understanding between faiths, note, but about faiths. Perhaps I'm reading too much into some clumsy grammar - but given the second part of the statement I don't think so. Blair clearly believes that being the world's Mr Faith is a ticket to continued influence and power.

The Observer also reveals the identities of some of the advisers who sit on the foundation's grandly-named "council". They include Mustafa Cerić, the Grand Mufti of Bosnia. He was the one, you may remember, who recently claimed that God had rigged the US election to ensure victory for Barack Obama. There's also the evangelical pastor Rick Warren, who to some liberals' dismay was invited to deliver a prayer at Obama's inauguration. Like Cerić, Warren is generally considered a liberal, despite describing gay marriage as equivalent to incest or paedophilia. His views are less important to Blair, I suspect, than his relationship with Obama. Although no longer in power, Tony has managed seemlessly to transfer his affections from Bush to Obama, so that the foreign leader more closely identified than any other with Dubya's discredited policies wsa hailed by the new president just the other week as "my good friend Tony Blair". You have to hand it to him, he's one of the world's greatest networkers.
Email Post
Labels: Blair middle east religion

Anonymous said…
Well, The Tony Blair Faith Foundation website leaves me feeling queasy, and not just due to its colour scheme!