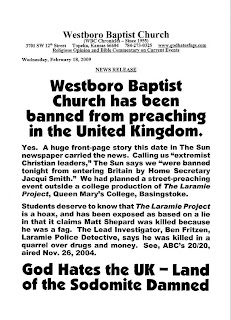 UPDATE The Sun is reporting that Pastor Phelps and his daughter have indeed been denied entry. "Both these individuals have engaged in unacceptable behaviour by inciting hatred against a number of communities" said the Home Office.

This is intolerable - even if, as seems likely, they never planned to come in the first place. Labour have a mad addiction to bans: bans on people, things, activities and opinions they don't happen to like. Whatever happened to debate? Whatever happened to the freedom to express dissent? What are these people afraid of? The only hate the Westies inspire is against themselves. They are risible and pathetic: but they are no danger to a strong society. Unlike the present deranged government.

Peter Tatchell is quoted as saying, "If Geert Wilders and Louis Farrakhan have been banned as preachers of hate then so should Fred and Shirley Phelps". His logic is impeccable; but following this logic will lead to increasing numbers of these arbitrary and coercive bans, until no-one is allowed into the country who hasn't signed a statement endorsing New Labour values. The answer is not more bans, but fewer. Only people who directly threaten or incite violence should be banned. No-one should be banned for their opinions.
Email Post
Labels: free speech Politics religion Westboro Baptists

Unknown said…
Actually, Peter Tatchell said that he did not agree with the ban on Geert Wilders but that the ban on the Phelps (which he didn't agree with either) was a logical extension of that decision. Your quote, I think, implies that he thought they should be banned.

However, I agree with your conclusion. Free speech is being whittled away. I am sure bloggers are in the sights - our idiot government must be horrified that there exists a group of uncontrolled commentators. If I was of their mindset, I would be going for blogs a.s.a.p. before the masses become aware that there is an alternative view to that offered by the moribund, dead tree press.

Anonymous said…
Good article, totally agree. The only "speech crime" bans should be against people who clearly advocate violence or other forms of active intimidation/discrimination.

What we're seeing here is a government so anxious to seem even-handed that it's become utterly absurd. And I say that as a screaming gaysexual who the Westies no doubt think is hurtling hellwards.
20 February 2009 at 16:52