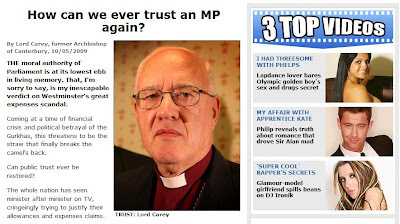 Once again, the distinguished former archbishop of Canterbury, Lord Carey of Clifton, chooses the News of the World as the most appropriate pulpit for a sermon on public morality. He has given Screws readers the benefit of his theological learning and sophisticated ethical philosophising on a number of previous occasions. Last year, he leapt to the paper's defence over its exposé of Max Mosley, claiming that the leering coverage of the FIA boss's spanking party represented an outstanding example of public service journalism. The idea that it was none of his, or anyone else's business represented a "a bleak, deeply-flawed anything goes philosophy", thought Carey. The judgement against the paper represented a "dangerous precedent", of which "the first major victim is free speech".

His thoughts on MP's expenses are less contentious, amounting to a string of platitudes about how politicians had lost any sense of public service. He damns politicians' "clawing greed" and "culture of abuse", and concludes that "The whole system of MPs' remuneration and expenses must become subject to public debate and scrutiny, with a fully independent body overseeing any new proposals". He thinks that "they've only themselves to blame".

Fair enough. But why now? As a long-standing member of the House of Lords, Carey must have been aware for years of the potential for abuse in the system of Parliamentary allowances. He sounds positively misty eyed about the good old days, when public service was the only motivation for entering politics. "Historically, the idea of such service has often been associated with Christian themes of sacrificial love and putting the needs of others before your own," he writes. When was that? Politicians, I fear, have always indulged in dodgy behaviour of one sort or another; it's just that now they are more likely to get found out.

As for Carey's strange relationship with the News of the World, it reminds me of those medieval bishops of Winchester who drew a large part of their income from Southwark brothels. I can see why the Screws wishes to have metaphorical holy water sprinkled over its usual diet of footballers' threesomes and celebrity drug-scandals. Carey for his part gets to remind the public of his continued existence. But perhaps - for his colleague's sake - he should be a little careful. Bishops have generous expense allowances too.