Review: When the Lights Went Out

Britain in the Seventies
by Andy Beckett 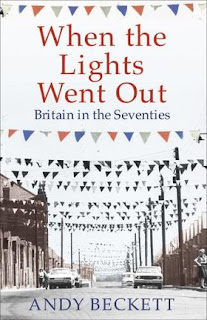 The thirtieth anniversary of the day that the Seventies ended - at least in Britain, with the coming to power of Margaret Thatcher - is an appropriate time to take stock of that pivotal, but awful, decade. The 1970s remain garish in memory and imagination, grungy, delapidated, politically polarised and with an ominous undertow of barely-suppressed violence. An era of extremes, teetering on the brink of something inchoate but troubling, it was the most Gothic decade since the 1890s.

We know what happened next. At least, we thought we did: until a year or so ago, the inevitable triumph of Thatcherism and the free market made the strikes, power-cuts, demarcation disputes and shambling public-sector inefficiencies of the Seventies appear like an enveloping cocoon from which Britain - the "sick man of Europe" - was not yet able to free itself. It was a different, alien world - Life on Mars, indeed - that some could revisit with nostalgia but which seemed increasingly irrelevant.

But not any more. The Seventies are back. The concerns of the period - global economic meltdown, environmental collapse, rising unemployment, widespread disillusionment with conventional politics and politicians, a sense of insecurity - are back with a vengeance. Now, as then, apocalyptic visions about; talk of irreversible national decline, banished since the mid-Eighties, is once more in fashion. What lessons, then, does the era have to teach us?

Andy Beckett's new book, When the Lights Went Out, sheds new light on the decade from the perspective of those who lived through its most memorable events. Beckett has interviewed politicians and thinkers, trade unionists and activists, eco-warriors and pioneering feminists, the famous and the unknown, in pursuit of a more rounded portrait of the era: one that while examining what went wrong also attempts to demonstrate that not everything did go wrong, and that there were many people who actually enjoyed the Seventies. He has a novelist's eye for the telling detail, and the book abounds in striking vignettes. Free-market guru Lord Harris of High Cross picks the author up from Barnet station in a brand-new hatchback and "a moustache straight from the forties". In Shetland, temporarily rich from North Sea oil, gleaming leisure centres sit unused; one of them now provides shelter to sheep. An elderly Edward Heath is helped into his chair, landing with a thump: "his glacial blue eyes showed not a trace of embarrassment". A year later, his funeral in Salisbury cathedral was "a hushed museum of pinstripe suits and mid-twentieth century haircuts"; Beckett sees "not a single damp eye".

In such breezy style, Beckett takes the reader through the key events of the decade, some of which seemed more important at the time than they probably were: Arthur Scargill's victory in closing down Saltley coke depot in 1972, for example, retold here like some heroic incident from the Trojan war. Other set-pieces include a government sponsored free pop festival at a disused airfield, the first issue of Spare Rib, Harold Wilson's incipient paranoia, Ted Heath's doomed scheme to build a giant airport in the Thames estuary and, of course, the IMF loan crisis and the ensuing Winter of Discontent that finally did for the Labour government. Beckett reminds us that many trends that are now mainstream - the gay rights movement, feminism, environmentalism - first came to public prominence during the early 1970s, a period he calls "the real Sixties".

The author's sympathies are clear. He empathises with aging hippies and even more aging trade union leaders, and seems content to take Tony Benn's loaded accounts of history at face value, while eloquently dispatching free-market Tories. He tells Jim Callaghan's grandson that Mrs Thatcher's successes were largely due to luck. As one might expect from a Guardian journalist, his sentimentality about past struggles and their colourful, engaging leaders sometimes trumps more rigorous judgement. He is simply unable to fathom, it seems to me, why the country needed (and indeed wanted) a radical change of direction in 1979. But this is a fantastic read. And in entering with such sympathy into the minds of those who, often innocently and from the highest motives, made such a comprehensive mess of things more than thirty years ago Beckett also, despite himself, serves a warning about our current leadership's rediscovery of state-centred solutions.

As Mark Twain said (or is supposed to have said), history may not repeat itself, but it does rhyme. Today's political and social climate rhymes with the Seventies as much as, or more than, it rhymes with the Thirties. Yet just as the recession of the Seventies was not nearly so bad as the Great Depression, so too our current woes - despite lazy talk of unprecedented economic trouble - pale into insignificance beside those of thirty years ago. They really do. Beckett makes a good effort at shifting perceptions of the decade, and in some respects - lower house-prices, for example, or the freedom enjoyed by children to play (and fight) free from adult supervision - the decade really does represent a lost Eden. But there was also misogyny, racism, casual prejudice, hooliganism, concealed horrors of child-abuse and domestic violence that are unimaginable today, as well as a widespread cultural nihilism reflected in the overloud, discordant un-music known as Punk.

Perhaps it was more exciting: there was an edge to life that makes our present society seems somnambulent by comparison. But even this book's eloquent prose can't, ultimately, disguise the fact that Britain in the 1970s was a nation that had lost its way.

WoollyMindedLiberal said…
I remember the 3-day week and the power cuts most vividly. Being young at the time it was something of an adventure when the TV went off and the house was plunged into darkness forcing us to light candles to see by. These days the impact of power cuts on the 1970s scale would be horrendous.

While it is true that poor risk assessment has made parents overly protective and clogged the streets with kids in cars instead of walking / cycling / bussing themselves as my generation did there isn't that much Golden Era from the 70s excepting the music in the first half when 'progressive' meant something not unlike 'indie' did in the 80s when 'indie' actually meant something!

As for punk, well it was a commercial untalented artschool shadow of what Hawkwind had been doing for years. Now there was a true rebellion - splendidly anarchist and utterly bonkers.
6 May 2009 at 15:49

You surprise me. I remember Hawkwind very well, they did a lot of benefit gigs and being at benefit, I remember particularly well a gig at Exeter University and underground magazines and mescaline and the Space Ritual in its full glory and thunder. They were the first, well the Druids probably did something similar, rave band - Hawkwind were for dancing to. Up, up and away. I know you like to deride us hippies, but at least we had a leap about. Hippie 'punk' like the Deviants and the Fairies, may have been more influencial especially on my fave rave anarcho punk outfit, Crass.

I'm feeling like a bit of anarchy myself. Have you seen the CiF eviction hall of fame? NemesistheWarlock is the latest to join you in the afterlife. It looks to me now very much like a change of management policy and, if so, it should have been announced prior to any action being taken. It's like a Stalinist purge, emails instead of icepicks and profiles being disappeared in the middle of the night. I did allude to the remote possibility of a strike but I'm waiting on a statement from the management about reincarnation first.
7 May 2009 at 03:40