It was compelling, beautiful. They were like David and Jonathan, Achilles and Patroclus, Bill and Ben. In the Downing Street garden this afternoon Nick Clegg and David Cameron resembled a couple of Apple executives enthusing about their latest gizmo. They were a double-headed charm machine made of Win. 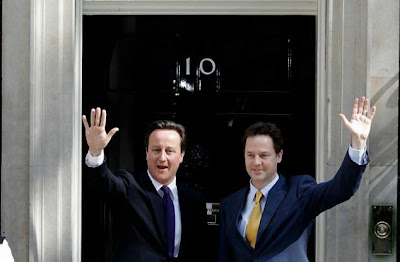 The last time I saw two coalition partners look so delighted to be in one another's company it was Ian Paisley and Martin McGuiness, the Chuckle Brothers themselves. No Brown/Blair nightmare this. They could have been Blair and Clinton, or possibly Blair and Bush. But, still, how can you not love it? Max Hastings may have grumpily dismissed the new coalition as a pantomime horse, but while parts of the agreement have the appearance of a hastily stitched-together compromise the presentation hinted at something deeper: a coming together of political programmes and ideals that are far from incompatible and which may make of them a whole greater than the sum of its parts.

What is this thing? Is it Nestorian, existing in two eternally distinct parts which have only the appearance of union, like water and oil poured into the same glass? Or is it monophysite in character, with the two essences coming together to form a new substance, neither Conservative nor Liberal Democrat but a unique combination of attributes? Will the two parties become symbiotic, will one parasitise the other, or will it be fragile and temporary? Only time will tell, of course. But the signs so far are good. The two leaders spoke in strikingly similar terms about their priorities, and they sounded remarkably like Conservative priorities: freedom and opportunity, more power for individuals and less for the state, social responsibility, restoring fiscal stability. If these are Lib Dem priorities too, then great.

As a programme for government it's considerably more coherent than we have any right to expect from two parties that are only working together because neither has any alternative. Boris Johnson may have been right to comment on the "hybrid vigour" of the new arrangement, even if his image of a cross between a bulldog and a chihuahua suggested something freakish and unpredictable. (I was hoping to entertain readers with a picture of the offspring of an English bulldog and a chihuahua, but was unable to find one. Has it ever in fact been done?) In fact, the new government looks oddly natural and right. You think, "what took them so long?" Well I do, anyway. It lacks only a name. Colliberation, perhaps? Clameronism? Clegg-Cam. If it all went wrong it would be Camcleggeddon.

Not all the policies set out in the leaked agreement are as welcome as the statement on civil liberties, which must have been easy for the two sides to agree upon (basically, undoing the damage done by Labour). "Robust action to tackle unacceptable bonuses" sounds sure to be popular, but can it really be achieved without illiberal state interference in private business arrangements? For me, five years is at least one year too long for a fixed-term Parliament, and unsurprisingly there are expensive environmental commitments. Europe may prove to be a fault-line. But no government, and no manifesto, is perfect. On the whole, the agreement represents the best of both worlds rather than the lowest common denominator. Sometimes it's the small things that matter: we are to have a Department of Education once again, for example, rather than Ed Balls' Orwellian-sounding Children, Families and Schools.

I was expecting a degree of cordiality when the coalition was announced. I wasn't expecting the atmosphere of near-euphoria that accompanied today's events. In a way, I'm reminded of the election of Barack Obama: one's enthusiasm for the product tempered by awareness of the almost insuperable economic and social challenges ahead, which no amount of high-flown rhetoric can disguise. The current situation would place heavy strains on even the most united single-party government, and any coalition risks either deadlock or split. Furthermore both Cameron and Clegg are such slick salesmen we perhaps shouldn't take their bonhomie entirely at face value. Yet the mood seems genuine enough, and British politics suddenly seems lighter, brighter, less childish and tribal. That isn't simply because we have two parties in coalition. It's also because of the departure (permanently, I hope) of the poisonous tendency associated with Alastair Campbell, Peter Mandelson and their many lieutenants and wannabes.

We might be seeing the rebirth of decent politics. Given the challenges facing the new government, we had better hope so.
Email Post
Labels: Cameron Con/Lib coalition Politics