There were definitely a lot of complaints

In a fun postscript to last year's atheist bus wars, I learn that the most complained-of advert in Britain last year was... for the Rev George Hargreaves' counter-poster. It received a grand total of 1204 complaints, while the original BHA "There is probably no God" was down at number 6, with a mere 394. More than twice as many people complained about an advert for oven cleaner which some found offensive to men. Hargreaves - founder of the Christian party and former Eighties record producer - went with the slogan “There definitely is a God, so join the Christian Party and enjoy your life”. 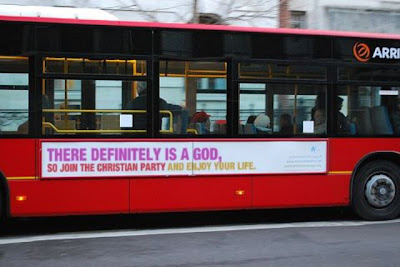 The atheist bus campaign, you may recall, was itself complained of by a some high-profile and rather silly people, notably Thought for the Day regular Clifford Longley, who sent the ASA several pages of ill-digested "science" as part of his case. There probably is a God, he claimed - and moreover he could prove it. It had something to do with the Anthropic Principle, he maintained. Unfortunately for him, some of the scientists he had used pointed out that he had misquoted and misunderstood their work. Even more unfortunately, his lengthy exposition turned out to have been lifted verbatim from a Creationist website. I was one of those who bothered to file a counter-complaint pointing out Longley's plagiarism, irrelevance and foolishness - the reply I received was an early indication of the ASA's attitude towards the issue.

The ASA wisely decided not to waste their time on any of the complaints (they also rejected the one about the oven cleaner) - though for subtly different reasons. They chose to interpret "There is probably no God" as an expression of opinion, rather than as a statement whose truth could be ascertained on an objective basis. After all, if all that was needed to settle the age-old conundrum of the existence or otherwise of a Supreme Being was a referral to the Advertising Standards Authority, there would be no need for the rival publishing efforts of Richard Dawkins, his allies and critics. As for the Rev. George - the reference to his fringe political outfit was enough to put the matter beyond the ASA's remit. They don't concern themselves with matters party-political.

But what should we make of the difference in numbers? First, I think, most Christians, even campaigning Christians of the type we've become all too familiar with over the past couple of years, weren't particularly bothered by the bus posters (although that reliable fruitcake, Stephen Green of "Christian Voice", couldn't resist making his own complaint). Some even welcomed them as an invitation to debate. In any case, the BHA posters were non-denominational. Had they read "There is no Allah, and Mohammed is not his Prophet", the response might have been different. Or, indeed, "Christianity is bollocks - spend Sunday morning in bed" would probably have provoked a larger number of complaints. The slogan was just too reasonable - those who did bother to complain were forced into Longley-style absurdism.

So why did so many more non-believers complain about the Hargreaves poster? I doubt many were genuinely offended by it - although Ariane Sherine's original proposal was informed by her own feelings of annoyance, when a Christian bus ad she spotted led to a website threatening non-believers with Hell. If anything, it should have been more offensive to Christians than to atheists. The notion that the proper response to discovering the probability of God' existence is to dash off a subscription cheque to George's personal political project - basically UKIP at prayer, with added Clarkson - must strike many believers as a trifle odd. I'm guessing the publicity attracted by Longley's complaint, and others equally silly, played some part. It was tit for tat.

Plus, of course, atheists and sceptics are very well-represented online. It's now ridiculously easy to file a complaint with the ASA. So easy, in fact, that the wonder is there aren't more trivial complaints coming across their desk. It's noteworthy that of the top ten most-complained-of adverts mentioned in the annual report, no fewer than six were held to fall outside the ASA's remit or to otherwise not require an investigation, while only two were fully upheld.

Rather like voting, complaining to the ASA is devalued when it's made too easy. People should have to put the effort in.
Email Post
Labels: advertising atheism atheist bus campaign religion