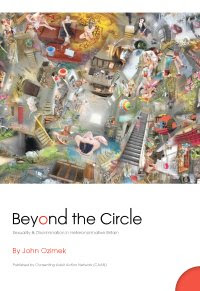 I've been sent a little booklet published by that enterprising pressure group the Consenting Adults Action Network (proof that you don't need to be a taxpayer-funded fake charity to run effective campaigns, though presumably it helps) about the continuing and indeed worsening discrimination face by various sexual minorities in officially tolerant, liberal Britain. Entitled Beyond the Circle (and obtainable from CAAN here, for £6.50) it's written by the former John Ozimek, regular contributor to The Register, who now goes under the name Jane Fae.

The circle in question is the "charmed circle" of officially and socially sanctioned sexual identity. Originally limited to heterosexual marriage, this has been extended to embrace cohabiting relationships and gay partnerships, an advance still lamented by religious conservatives and conversely held up as proof that we live in a liberal and tolerant society. For those outside this charmed circle, however, the reality can be very different. Moral and religious objections to, for example, sadomasochism or various forms of consensual sex-work may have dwindled: in their place has come feminist ideology (couched as opposition to "objectifying" women) and, most of all, a progressive-sounding concern with protecting the vulnerable - see, for example, the previous government's legislation against possessing "extreme" porn.

Perfectly harmless people find themselves demonised, even criminalised. Worse, society now views any "crime" (or even rumour) bearing the label "sexual" far more seriously than it used to, and is far less willing to forgive. As Ozimek writes, "the growing insistence on vetting on vetting, combined with a view that an individual's all-round conduct and belief systems are relevant to work conduct, could be about to create a situation whereby once someone is outside the system, they can never come back in."

The problem facing people with alternative sexualities is connected with the piecemeal way in which discrimination law has developed over the years. Instead of recognising the basic principle that unfair and irrelevant discrimination is wrong, the state has sought to define particular categories of person who are protected. It is based on the notions of group rights and victimhood, and leads to the perverse conclusion that people deserve protection on the basis of who they are rather than what has happened to them. It is not enough to be discriminated against - you must be discriminated against for an officially disapproved reason, and you also have to possess what the Equality Act calls a "protected characteristic". Legally, some people are now more equal than others. Sexual orientation towards members of the same gender will bring you protection; orientation towards a certain manner of expressing one's sexuality will not. This is anomalous and wrong.

Ozimek also blames the strange and "sniggering" British view of sex. Certainly, stories of "deviant" practices are still guaranteed to get national newspapers hot under the collar, as two stories from the past week (a tragedy and a farce) demonstrate. In one, a woman was prosecuted for assault after an incident in a hotel room involving what was described as "a medieval instrument of torture". The judge was notably sympathetic, the papers merely agog (perhaps it helped that the man she was with could be described as a "top lawyer"). The other was the death of a motor-racing boss Robin Mortimer in a Belgian dungeon following a session with two leading S&M mistresses. Details remain unclear - he may turn out to have died of purely natural causes, or there may have been an accident involving nitrous oxide - but the tale instantly and inevitably became one of "Europe's most sadistic dominatrix" and a client killed by his dangerous obsession with the dark side of sex. That the newspapers were able to print fetish photographs taken without credit from Mistress Lucrezia's website was, of course, only a bonus.

In such an atmosphere, it's not surprising that many kinky or otherwise sexually unconventional people now live in fear of their perfectly legal private lives coming to the attention of the media, or even of their employer. More than mere embarrassment awaits those who are "outed". The booklet collects together some startling instances of prejudice and discrimination masquerading as concern to maintain professional standards or protect vulnerable groups. For example, there's the would-be social worker (previously featured on Heresy Corner) who lost her chosen career after it was revealed to her university tutors that she had a "submissive" lifestyle. Even more startling, perhaps, is the probation officer who made the fatal mistake of performing his fire-eating routine in a fetish club. He wasn't even involved in the "scene", yet his employers managed to fire him for bringing the profession into disrepute.

The paradox, of course, is that alternative sexualities have never been more openly discussed nor more widely accepted. It is no longer a cause for political embarrassment, for example, that one of David Cameron's leading speechwriters once made money organising sex parties, while Heresy Corner favourite Max Mosley famously faced down the News of the World's moralistic prurience and emerged something of a popular hero. He, of course, was rich enough and self-confident enough not to care what the world thought of him. A teacher or social worker, or a parent caught up in a custody dispute, is in a much more vulnerable position. It need hardly be said that today's culture of openness brings its own dangers, as many people who have posted something incriminating on Facebook for their friends have discovered to their cost.

What is to be done? Getting rid of the Labour government was undeniably a start. We've yet to see much evidence of the promised Great Repeal Bill, but the dangerous vetting-and-barring apparatus created by the Safeguarding Vulnerable Groups Act has been suspended and may be largely ditched. But while the new government has not shown any interest in adding to Labour's pile of sex legislation, neither does it appear in a hurry to dump it. It has other priorities, after all - and, like all governments, lives in fear of the Daily Mail. Ultimately, only greater public knowledge about, and indeed enjoyment of, unconventional sexual practices will bring about change. That may mean more brave people being prepared to come out and fight for their right to be kinky. It worked for the gay community. I can't help thinking, though, that there's something inherently wrong about needing to campaign publicly for the right to enjoy what is, after all, a very private and personal thing.
Email Post
Labels: books equality extreme images ban human rights Politics sexuality