Story of the day - obviously, it's Paul the psychic octopus, who makes a speciality of predicting world cup results. Allegedly, he has an 80% success rate - not bad for a marine invertebrate with a brain not much larger than that of an average England goalkeeper. The bad news is that Paul fancies Germany to beat England on Sunday, a prediction signalled by his preference for a mussell from a box marked with a German flag. Tanja Munzig, from the German aquarium where the octopus resides, described the decisive way in which he picked out the winner as "phenomenal" and "just absolutely crazy." 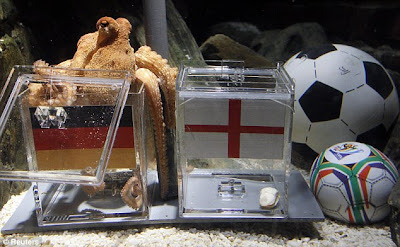 Crazy about sums it up.

As PZ Myers points out, cephalopods are noted for their intelligence, so an 80% success rate may simply reflect his deep knowledge of the sport. After all, German victories over Serbia and Ghana can scarcely be regarded as unexpected. Ditto a victory over England, alas. It certainly isn't evidence of psychic powers. It would seem that the use of such animal oracles - perhaps traceable to the Roman practice of predicting the outcome of battles by reference to the eating habits of sacred chickens, perhaps not - is popular in Germany, despite a generally low sucess-rate. The report notes that a 19 year old hippo named Petty falsely predicted last week that Germany would defeat Serbia (she selected the wrong pile of hay) and a monkey was equally wrong, choosing a raisin that indicated a Ghanaian victory.

Is there any plausible explanation for Paul's superior track record? It could well be chance, obviously. With several oracular creatures to choose from, it's not surprising to find one with an apparently impressive predictive ability. The number of trials is far too small to discount random variation. But there might be something else at work.

To make his prediction Paul had to detect the presence of food inside a sealed, see-through container, remove the lid and climb inside, which is quite an impressive feat of ingenuity it itself. The "experiment" offered him the choice of two containers, distinguished by their being marked out with a national flag. If, as seems likely from the report, the crowd-pleasing stunt has been carried out before each of Germany's previous games, the German flag will have been a constant feature. Octopuses are very visual creatures, with excellent eyesight: it's probable, then, that Paul will have learned to associate the German colours with food. So he would have made a bee-line for the "correct" jar as soon as he saw it.

In other words, Paul is a molluscan version of a loyal fan. He will always cheer for the home team - as long as there's a tasty snack in it, that is.
Email Post
Labels: psychics science sport