In the years before she was revealed as Dr Brooke Magnanti, many doubted that the eloquent author and sex-blogger Belle de Jour was a real person. Her work was both too well-written and too upbeat to be the work of a real prostitute, sceptics argued. She must therefore be a fictional creation - a male fantasy, possibly even the product of a male imagination.

It was a thought that gave comfort to the many people who objected to the very idea of a "happy hooker" - or indeed of any sex-worker who wasn't trafficked, imprisoned, drug-addicted and regularly raped. Such a person should not exist. Even the suggestion that she might was a threat, serving to legitimise the exploitation of women. Belle was more than a threat, she was a scandal, glamorising prostitution, taking attention away from the real issue, which was the campaign to destroy off the sex trade. If Belle existed - if her experience was in fact fairly typical of intelligent urban women who made money selling sex - then the whole prohibitionist case was undermined. Better to write her off as a clever hoax, and those who believed her as naive. 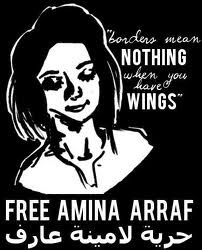 here was at first little such scepticism last week when it was announced that a Syrian lesbian and human-rights activist blogger, Amina Arraf, had been abducted by the secret police. Instead there was a huge outpouring of humanitarian concern, beginning on Facebook but soon reaching the mainstream media. Only after it transpired that no-one in Syria had heard of her, that no-one fitting her description had disappeared, and that a photograph claimed to be her belonged to a woman living and working in London, did doubts begin to surface.

Now, to widespread outrage, the gay girl from Damascus has been revealed as a heterosexual American man living in Scotland. Tom MacMaster had attempted to defend his hoax, which included not only stealing somebody's face and sparking an international campaign but also exchanging more than a thousand emails with a Canadian woman who believed that they were having a romantic relationship. Which is somewhat creepy.

There are bloggers in Syria who are trying as hard as they can to report news and stories from the country. We have to deal with too many difficulties than you can imagine. What you have done has harmed many, put us all in danger, and made us worry about our LGBT activism. Add to that, that it might have caused doubts about the authenticity of our blogs, stories, and us.

MacMaster is not entirely contrite, however, defending his pseudo-blog on the grounds that pretending to be an attractive Syrian lesbian was the only way he could get anyone to listen to his views on the Middle East. This is what he told Good Morning Scotland:

It was a fiction but the facts I was presenting about Syria, about Islam, about the Middle East, about all of these things are true. I really felt a number of years ago that in discussions on Middle East issues while living in the US, when I presented real facts and opinions, the immediate reaction to somebody with my name was ‘why are you anti-American, why are you anti-Jewish?

Getting that kind of reaction was distracting from the real focus. So, I invented a name to talk under that would keep the focus on the actual issue.

Even more interesting was a comment he left on the blog itself. "This experience," he writes, "has sadly only confirmed my feelings regarding the often superficial coverage of the Middle East and the pervasiveness of new forms of liberal Orientalism."

The chutzpah of the first part of that sentence is striking: the fact that he managed to hoodwink thousands of well-meaning people - and, for a time, much of the global media - becomes an opportunity to lament the "superficial coverage" of the media, rather than to reflect upon the distress he has caused. Amina may have begun as a sock-puppet for MacMaster's views, but she soon became far more than that: a person that other, real people cared about, campaigned for and, in one case, fell in love with. That's partly down to the quality of the writing - deeply moving in places - and the strength of MacMaster's empathy with the Middle East. But it's also a measure of the need people had to believe that someone like her existed.

I think MacMaster's hoax went beyond mere publicity-seeking or thoughtlessness, and became an attempt to skew the international debate and exacerbate an already dangerous situation. The clue to what he was playing at lies in the phrase "liberal Orientalism". It's not clear what liberal orientalism he thought he was exposing - perhaps it was the concern some (but not all) western liberals display for the plight of gay people and women in repressive Islamic societies. A perception which, of course, made "Amina" such a brave and representative heroine. It's even possible that he was deliberately creating a character who would prove irresistible to Western liberals, someone around whom they could unite - as indeed, for a time, they did.

MacMaster's own brand of liberal Orientalism, however, seems to have been of a different order - the celebration of an idealised Islamic society characterised above all by tolerance, pluralism and freedom. A picture entirely at odds with the burkhas and beheadings image perpetuated by that other sort of "orientalism" that sees Islam as irredeemably backward and savage.

In a very telling post published on 1st June - a few days before Amina "went missing" - MacMaster/Arraf drew a contrast between "their Islam" and hers. "Their" Islam - the caricature associated with, say, Geert Wilders or the Daily Express - was

an image of a religion based on the worst cultural practices of a few dozen lands muddled together and confused with the religion, of selected quotations taken out of context or wholly fabricated, of fantasy masquerading as reality.

Whereas "her" Islam was

sitting at the feet of the Sheikha (our Islam has sheikhas as well as sheikhs!) as she explained that it was perfectly natural to desire other women; chastity was what mattered, not the object of desire. Our Islam discussed sexuality as a healthy and normal part of humanity, a religion for real people, not reserved for ascetics.

It's true that Syrian Islam is fairly liberal - certainly when compared with Saudi Arabia. But it isn't that liberal. Homosexuality remains illegal in the country. More to the point, the religious tolerance for which the country is rightly famed has much to do with the secularism enforced by the Assad regime. This secularism is partly pragmatic: Assad's power-base comes from the minority Alawite sect, and the regime has maintained itself with the support of other minorities, including Christians.

The leaders of Syria's ancient churches have been notably silent about Assad's human rights abuses in recent weeks, and some have been cheerleaders for the government. They continue to support a muderous regime because they are terrified that if the Ba'athists fall their own freedoms will be lost too. That Sunni majority rule would mean the oppression of minorities.

It is already starting to happen in Egypt, where recent weeks have seen an upsurge in violence against Coptic Christians (a community whose rights were being eroded, in response to Islamist campaigns, even under Mubarak). Christians, though, have less to fear from Islamic radicalism than do gay people. It's not a comforting thought - that the toppling of a brutal dictatorship might lead to new types of oppression for members of vulnerable minority groups. Where is a well-meaning liberal - orientalist or otherwise - to turn?

Easy. To an attractive, proud, openly gay, loyally Muslim woman who supports the revolution. A shame, then, that unlike Belle de Jour she really did turn out to be nothing more than a male fantasy.