Review: Why We Believe In God(s) 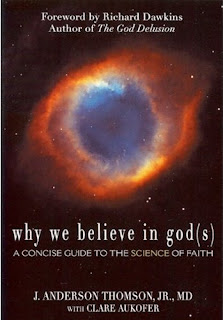 Why We Believe In God(s): Concise Guide to the science of faith by J. Anderson Thomson with Clare Aukofer (Pitchstone Publishing)
(available from Amazon UK here)

Is there an essential conflict between science and religion, or do they occupy such different cultural and psychological spaces that no such conflict is necessary or even coherent? Many liberals - liberal believers and secular liberals alike - would say that latter. It has become something of a liberal orthodoxy to denounce or sneer at those "militant atheists" and religious fundamentalists alike who suggest otherwise. Science, as earnest contributors to Thought For The Day repeatedly remind us, has little to say about morality or the meaning of life. Such questions are best left to men wearing dog collars or beards.

But some conflict is surely inevitable, because science and religion share at least some questions (Where did the universe come from? What is the source of moral intuition?) to which they will inevitably supply quite different answers. They seem to occupy some of the same cognitive space. In one recent experiment, Christians demonstrated the same physiological "disgust response" when confronted with a passage from the Koran and one from Richard Dawkins.

And there's one area in which science cannot but trespass upon religious territory - the attempt to explain scientifically what religion is, where it comes from and why it continues to hold such sway over human imagination and human behaviour. The yearning for gods, and the need to associate with others in religious rituals, seems to be universal. But does religion itself serve an evolutionary purpose, or is it more a by-product of other facets of human nature that do?

J Anderson Thompson, a psychiatrist at the University of Virginia, provides a short but coherent account the "by-product" thesis in this new book. His view is that religion utilises - hijacks, if you prefer - a number of innate cognitive mechanisms, all of which in themselves are helpful or even necessary for survival. We all, for example, have an "attachment system" that bonds children and parents, lovers, friends and allies. God can be our heavenly father, the lover of the soul, the friend we have in Jesus - and the powerful ally who will help us to defeat our enemies. We are predisposed to accepting authoritiy - again, part of our inheritance as social, hierarchical primates. God is the ultimate authority.

Prayer and sacrifice involve a kind of reciprocal altruism (probably the ultimate basis of morality, and the phenomenon most commonly held up by the inter-faith crowd as the shared insight at the heart of all religion). Worshippers often try to strike a bargain with God - answer my prayer, cure my sister's disease, and I will go to church more often or become a better person. I recently came across the extraordinary medieval rite of the "humiliation of saints", in which a community dissatisfied with the service a saint had provided would cast their relics upon the ground and hurl curses on them.

Another important dimension is what Thomson calls "hyperactive agency detection" - the way that human beings tend to imagine an actor behind every action. This might well have an evolutionary basis: a rustle in the grass probably isn't a lion waiting to pounce, but it's safer to run anyway just in case it is. This particular cognitive bias helps explain the appeal everything creationsim to conspiracy theories. Then there's "decoupled cognition" - the theory of mind that enables us to imagine what is going on is someone else's head. We can imagine having a conversation with a friend, a colleague, a dead relative or a talking pink unicorn. So we might easily imagine having a conversation with God.

Ritual is important, too. Intense shared actitivities - dancing, chanting, praying - alter our brain chemistry in powerful ways, raising the level of neurotransmitters like seratonin, domaine, oxytocin and the endorphins. They are, in fact, addictive. When allied to pre-existing religious beliefs, involvement in ritual can increase commitment, social bonding and suggestibility. This helps make religion a formidable social glue, and in some circumstances a dangerous one. The high that ritual provides can make participants flog themselves with glass shards, drink poisoned Kool-Aid or go off on crusade.

Thomson uses the metaphor of fast food. Our ancestors, faced with regular shortages, sought out foodstuffs rich in sugar and fat. On result is that we are still attracted to sweet, fatty, salty foods that lead to obesity and heart disease. Fast food piggybacks on tastes that evolved for good biological reasons. In fact it is sweeter, fattier, saltier - and thus provides more of an instant taste hit - than anything that occurs naturally. Religion, he suggests, works a bit like that.

We crave parental love - religion gives us a super-parent. We need social relationships - religion bonds us into a super-family, a super-community. We seek satisfying explanations - religion over-explains, offering answers we are predisposed to like. Here's another possiblie comparison. A herring-gull chick will peck at the red spot on its parent's beak to procure regurgitated food. In experiments, chicks will peck just as enthusiastically at a red spot on a plank of wood. The larger the spot, the more enthusiastic the pecking - despite the impossibility of the chick getting any food from it. Perhaps religion exploits our own cognitive weaknesses in a similar way.

Thomson's little book is less detailed, and less original, that Daniel Dennett's Breaking the Spell, but it provides an excellent primer of recent thinking in this controversial area of research. If nothing else, he shows convincingly why religion is so powerful. But is that the same as explaining what it is? There are two main questions here: why the particular package we call religion came together and whether it provides anything much beyond the bundle of cognitive hits that Thomson describes.

There's no conflict between saying that the building-blocks of religion are to be found in the cognitive mechanisms discussed in this book, and maintaining that it is important in itself. Evolution often adapts existing biological systems to a new purpose - feathers probably evolved for insulation before they were used for decoration and flight, for example. The many components of the eye were not all evolved for sight. Religion could be a similar adaptive system.

Explain the propensity to believe in supernatural beings, the need societies have for a clear moral code and the strong emotional satisfaction generated by group rituals, and you still haven't explained why these things usually (though not always) occur together. In the end, I suspect that there really is something distinctively "religious" about religion, and that while this book answers many questions it leaves the biggest one, for the moment, unresolved.
Email Post
Labels: atheism books evolution religion science