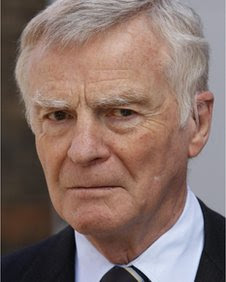 Since leaving the FIA - since the News of the World sting operation in 2008, in fact - Max Mosley has embarked upon a curious second career as a campaigner for privacy, and most especially his own. His appearance yesterday before the Levenson inquiry was one of many he has made before committees and in interviews on radio and TV over the past three years. He has become a polished performer, his case increasingly honed, his determination to force the tabloid press to change their behaviour undiminished.

So we weren't expecting surprises. Nevertheless, his evidence (both oral and written [pdf]) contained some fascinating details that haven't been widely circulated before. A few highlights:

- Mosley has taken legal action in more than twenty different countries not only to seek damages but also to remove the News of the World's covert video footage from the Internet. The video was hosted in at least 193 websites in Germany alone. So far, this litigation has cost him at least half a million pounds. Despite this, he is resigned to the fact that it has not been successful and will probably never be. He's particularly angry with the "intransigent" attitude of Google persist in cataloguing the video, and called for new laws targeting search engines.

- He complained that whenever he walks into a shop or restaurant he has to prepare himself for the fact that "everybody knows" about his sex-life and most have probably seen the video. He believes that victims of press intrusion "suffer a terrible penalty. It is comparable to the penalties courts can impose on convicted criminals, if not worse."

- Mosley was disappointed to be awarded a mere £60 thousand by Mr Justice Eady in damages against the NotW and at the judge's "refusal" to award exemplary damages. The award left him out of pocket and represented neither proper punishment nor deterrent. "It is impossible to pretend that paying a large bill is a remedy."

- He suspects that the NotW's evidence in court was partly submitted with a view to the next day's headlines, and represented an attempt by the paper to cause him further embarrassment.

- He also claimed, on the basis of a conversation with "a former senior employee of NI", that Rebekah Brooks colluded with Daily Mail editor Paul Dacre to attack the character and reputation of Mr Justice Eady (as seen, for example, in Dacre's notorious speech to the Society of Editors in November 2008, which Mosley thinks was "a deliberate and calculated attempt to intimidate the judiciary.")

- In a hilarious aside, Mosley speculated about what the "smutty" content of the Mail's own website might suggest about Dacre's own sex-life. He also (as I myself have done) mocked Dacre's poverty of imagination if he thought that a spanking party in Chelsea represented "acts of unimaginable depravity". And he reminded the inquiry that the women concerned were, far from being exploited or degraded, if anything even more enthusiastic about being spanked than he was. This, of course, is true. Indeed, there's plenty visual evidence out there to prove it, though it would be breaking at least one Mosley's injunctions were I to tell you where to look.

- Mosley refers to the remarkable evidence - detailed at length in the Eady judgment - of NotW reporter Neil Thurlbeck's attempts to blackmail two of the women concerned and the even more remarkable manner in which this evidence seems to have completely ignored. Not only was Thurlbeck not prosecuted (or even investigated by the police) but his bosses apparently remained under the impression that his behaviour was acceptable.

- Mosley even wrote to Rupert Murdoch suggesting that Thurlbeck's use of blackmail ought to be investigated by News International; Murdoch "did not deign to reply. One can imagine that if one wrote to the head of a Mafia family complaining about criminal acts by an employee one might get no response. But I was surprised to receive no acknowledgement from the CEO of a major international corporation in response to serious allegations of criminal conduct within his organisation." Murdoch's attitude "leads inevitably to the conclusion that criminality was tolerated if not actively encouraged within Newscorp and its subsidiaries."

It's worth reading this in conjunction with Thurlbeck's own self-justification which appeared recently in the Press Gazette. Neville denied writing the "blackmail letters" to the Mosley women, instead blaming "a certain executive, who I shall not name here for legal reasons."

Max Mosley was, as ever, an impressive witness, even if you don't share his enthusiasm for prior restraint. But I increasingly think there's something a bit strange about his whole approach. On the one hand, he wants to preserve his (and to be fair other people's) right to a private life, in particular the private indulgence of sexual tastes that, so long as they are between consenting adults, should be no-one else's business. On the other, he recognises that, as he put it, his own privacy is irretrievably lost.

As he put it, whenever he walks into a shop or restaurant "everyone knows". He must also recognise that his high profile as a privacy campaigner has not only cost him a great deal of money, which must be subject to a law of diminishing returns (a recent victory in France netted him a mere €7,000) but has also placed his sexual preferences permanently before the public gaze. It's not his fault that the News of the World exposed his love of spanking and accused him falsely of taking part in a "Nazi-themed orgy". But the fact that he remains the public face of British S&M is directly attributable to his inexhaustible enthusiasm for talking about his humiliation in public. One word for this is "masochistic".