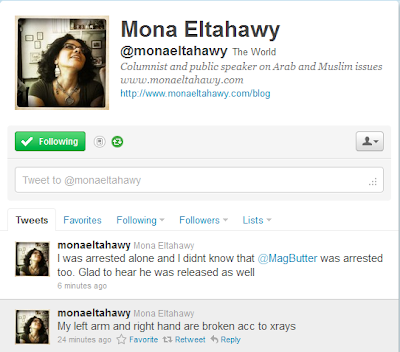 A remarkable series of Tweets from by Egyptian-born journalist Mona Eltahawy gives a disturbing insight into how Cairo police are dealing with people involved in the Tahrir Square protests.

Eltahawy, who now lives in New York, returned to Egypt to cover the latest events in the country's stillborn revolution. Yesterday she was at Mohamed Mahmoud St, just off the square, where there were clashes between demonstrators and police. She was arrested - it's not yet clear how or why - and found herself at the tender mercies of the riot police.

Twelve hours later she emerged with two broken arms and descriptions of the sexual abuse she says she was subjected to during her detention.

Despite finding it difficult to type (for obvious reasons) she was able to Tweet the following:

Beaten arrested in interior ministry. 12 hours with Interior Ministry bastards and military intelligence combined. Can barely type. My right hand is so swollen I can't close it. I can barely imagine what my family and loved ones were going through those 12 hours-I know they were worried about me to begin with. Sorry.

Besides beating me, the dogs of CSF subjected me to the worst sexual assault ever. Yes sexual assault. I'm so used to saying harassment but those fuckings assaulted me. 5 or 6 surrounded me, groped and prodded my breasts, grabbed my genital area and I lost count how many hands tried to get into my trousers. They are dogs and their bosses are dogs. Fuck the Egyptian police.

Didn't want to go with military intelligence but one MP said either come politely or not. Those guys didn't beat or assault me. Instead, blindfolded me for 2 hrs, after keeping me waiting for 3. At 1st answered Qs bec passport wasn't with me but then refused as civilian. Another hour later I was free with apology from military intelligence for what CSF did. Took pics of my bruises and recorded statement. On sexual assault and said would investigate it and said they had no idea why I was there. Then who does??! WTF!

The past 12 hrs were painful and surreal but I know I got off much much easier than so many other Egyptians. God knows what wuld've happened if I wasn't dual citizen (tho they brought up detained US students) & that I wrote/appeared various media. Egypt must be free of those bastards. The whole time I was thinking about article I would write; just you fuckers wait.