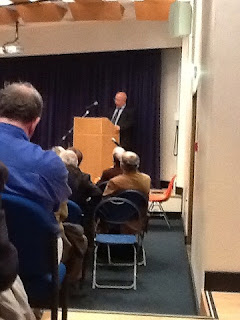 Lord Justice Leveson himself is now thoroughly bored with listening to the same tales of phone-hacking over and over again. He has nightmares of ending up like Lord Saville, who wasted most of his judicial career on an interminable inquiry into Bloody Sunday. His other main fear is that when he finally does produce a report it will join all the others on the shelf. And then in 10 or 20 years time there will be another scandal. That's how we do things in this country.

So thinks Independent editor Chris Blackhurst, who was talking about the Leveson Inquiry yesterday evening at Trinity Hall, Cambridge. He also conveyed a sense of the overwhelming pervasiveness of what he calls the Leveson industry. His own newspaper is a relatively small player in the ongoing saga of phone-hacking and media cross-ownership (the Indy didn't hack or employ private investigators, he maintained, because it couldn't afford to) but he's still kept busy by it. He recalled one week when he gave no fewer than four talks on the subject. When it will all end is anyone's guess, except that it will enrich many lawyers.

One of Blackhurst's complaints related to the inquiry's open-ended, indeed vague, terms of reference. Leveson is not looking into a specific misdeed or problem, such as phone-hacking or media ownership or the relationship between News International and the Metropolitan police. Rather he is charged with reporting on "the culture, practices and ethics of the press." It is a task that might have no end. Blackhurst himself could only scratch the surface of the issues raised by the current debate on the state of journalism. He didn't mention Johann Hari, for example.

What he did say was that Leveson "goes to the heart of what is wrong with this country today." The laws that were drawn up and passed for a purpose were simply ignored by journalists, by the police and CPS, by politicians. Power silenced what should have been an outcry. The law "fell asleep": the police, the CPS and the Information Commissioner "simply didn't want to know". Only when the hacking of Milly Dowler's phone came to light was their enough of a public reaction to compel David Cameron to set up Leveson as a traditional Yes, Minister-style response to the situation.

And while Leveson is "about" the press, for Blackhurst it is about much more. It should, he suggested, dispel any smug notion that Britain is an unusally clean country, that corruption scarcely exists here. Little money changes hands, instead it works by nudges, winks, mutual favours and (in the case of Rebekah Wade and the Met) gift-horses. Leveson might be exposing the corruption of the press, but less is being said about corruption involving arms manufacturers, the pharmaceutical industry, and PR. Leveson has failed to explore the way that PRs working in businessm the arts, fashion and sports - "some of the most powerful people in the country" - dictate the press coverage given to their employers.

Indeed he sounded quite indignant on behalf of journalism. Week after week journalists are being hounded, he lamented. Leveson has not heard about any of the good things that the press do, such as bringing to light the Parliamentary expenses scandal. All this at a time when the press is weaker than it has ever been, haemorrhaeging money and readers, challenged by an unregulated and unregulatable cyberspace. Nevertheless, he seemed quite comfortable

The real trouble, he suggested, was the Britain had no mechanism for dealing with corporate malfeasance. While the US has regularly seen top executives (such as the Enron crew) paraded through the courts, no banker over here has even been arrested. If the phone-hacking scandal had happened in America, the Murdochs would have done a perp-walk.

-The first question was asked by a "gentleman in the front row" who turned out to be Norman Fowler. I wondered if the students in the audience had a clue who he was.

Fowler suggested that the main issue was the concentration of media ownership, especially in Murdoch's hands, to which Blackhurst responded wondering who would buy loss-making newspapers if press empires were broken up. This led to an anecdote about how he and Rosie Boycott had hoped to turn the Express titles into beacons of liberal, intelligent thought (a sort of mid-market Guardian, I suppose) but had been thwarted when the group was snapped up by Richard Desmond. Cue much harrumphing about how Downing Street were "completely slavish" towards the pornographer who temporarily derailed his career.

- No-one mentioned Hari. I intended to, but the time for questions ran out before microphone got round to me. I was going to suggest that a whitewash of an inquiry followed by a period of "retraining" and the expectation that the malicious sock-puppeteer would get his old job back was a good example of the cosy British-style corruption he was complaining about. I was also going to suggest that had it not been for the work of independent, unpaid bloggers (who he seemed to want to regulate) Hari would be back at the Indy today.

- Blackhurst favoured state funding of political parties: it was, he said, "certainly the case that MPs are underpaid."

- When he gave evidence at Leveson, Blackhurst saw one lawyer whose sole job seemed to be to operate a tape recorder.
Email Post
Labels: Cambridge journalism Leveson Politics