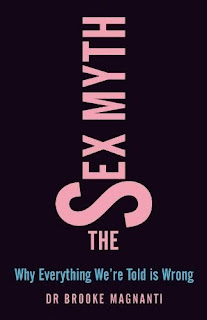 One of the best things about Brooke Magnanti's breezily-written new book is her name on the cover. Her previous notoriety as the call-girl blogger turned bestselling author Belle de Jour will (presumably) guarantee sales and has already produced widespread press coverage. Even if it hasn't been universally favourable (a spiteful review in the Telegraph stands out on that score) the press attention at least ensures that the important issues the book raises will reach a wider public than might normally be the case with a volume that seeks to dispell, rather than to sensationalise and talk up, fears surrounding sexuality, pornography, sex work, the sexualisation of children and suchlike recurrent tabloid fodder.

The slightly random collection of "sex myths" under discussion also include attempts to medicalise sex: for example, in trendy concepts of sex addiction or "female sexual dysfunction" (sometimes called "sexual anorexia", a phrase I hadn't come across before but which I'm unlikely to forget). She traces their historical antecedents in nymphomania and hysteria -- there's a hilarious digression about John Harvey Kellogg, a man whose ideas about sexual purity were as flaky as his cornflakes -- and critises the underlying, stiffling assumption that there's such a thing as sexual normality. Perhaps that's the ultimate sex myth.

The subtitle proclaims: Why everything we're told is wrong*. That depends on what you've been reading, of course. Many of these themes have featured here at Heresy Corner over the years, and some of this blog's heroes (such as Belinda Brooks-Gordon and Laura Agustin) are regularly namechecked. Even the Heresiarch surprisingly turns up at one point to accuse the Poppy Project (New Labour's go-to source of evidence-free scaremongering about sex work) of behaving as evangelistically as the Salvation Army.

So it comes as no surprise to me, and I hope to most of you, that MPs and even government ministers have often deployed wildly exaggerated sex trafficking figures or that the review into sexualisation carried out by trash TV psychologist Dr Linda Papodopoulos at the behest of the last Labour government was a seriously flawed document (and the more recent Bailey Review not much better). Magnanti also explores the history of the Obscene Publications Act (up to and including its recent outing in the case of "Sleazy" Michael Peacock and his fisting videos) and revisits the moral panic that produced that monument to bad law-making, the "extreme images" ban.

I find a lot of this yawningly familiar by now, but many people won't and Magnanti's book provides an entertaining compendium of tabloid myths, as well as a source of ammunition. Whether it can do much against the juggernaut of the Daily Mail, currently engaged in a crusade to introduce compulsory web-filtering, remains to be seen. On that highly topical subject she does a good job exploring the links between Claire Perry's Parliamentary campaign to save fifteen year-old boys from being forced to look at porn on the internet and organisations affiliated with the American religious right (such as, for example, the Witherspoon Foundation). Unity has also been on the case recently. I was also startled to learn (though perhaps I shouldn't have been) that in Ireland, a religious order that once ran the notorious Magdalene Laundries (which for decades used unmarried mothers as a convenient sourse of slave labour) is now prominently involved in anti-trafficking campaigns.

Possible links, and commonality of outlook, between radical feminists and religiously-motivated moralists, feature strongly in the final "myth" tackled by Magnanti, the assumption that campaigners are motivated by high principles. She demonstrates how, whatever the original or ultimate motivation of campaigners, the fear industry generates its own momentum. Campaigners rarely let facts get in the way of a good panic, especially when there's a conference circuit to enjoy, privileged access to politicians and policy-makers on offer, celebrity endorsements to win. This isn't entirely cynical, but it is human nature. I was reminded of something Christopher Hitchens wrote about why so many international conflicts seem intractable: because it's not in the interests of the parasitic class of factional leaders for there to be a solution.

Ronald Weitzer, a professor at Northwestern University, has an excellent paragraph that sums up the approach of what he calls "oppression writers" -- anti-porn or anti-prostitution campaigners such as Melissa Farley and Gail Dines. It isn't in Magnanti's book but could almost serve as a precis:

Oppression writers have been roundly criticized for violating standard canons of social science inquiry and for viewing sex work through a monochromatic lens. Despite this criticism, proponents rigidly adhere to the central tenets of their paradigm, even when confronted with compelling counter-evidence. Moreover, most oppression writers restrict their citations to writings of like-minded authors and ignore research findings that contradict the pillars of their paradigm. Such inconvenient findings are plentiful.

As with most books of this type, the emphasis is on women. Perhaps this is inevitable, and to be fair Magnanti does repeatedly criticise (say) anti-prostitution campaigners for ignoring the experience or even the existence of male sex-workers. She also evinces a tender concern for underpaid and put-upon male porn performers, almost making out that the industry is a functional gynocracy. A work dealing with media representations of sex, and the way that sex is problematised in public discourse, is almost bound to reinforce the perception that sex is something that mainly happens to, impacts upon and is most problematic for women.

This suggests a deeper problem, which despite its title the book scarcely addresses. It deals with "sex myths", in the sense of widely circulated inaccurate beliefs; "cargo-cult science", "zombie statistics"; moral panics. But what is the sex myth? Consider the constellation of popular ideas that lie behind and render plausible many of the claims advanced by commercial interests and by moral entrepreneurs. Sex and love belong together. Sex is the most important thing in any relationship. It should never be boring. Commercialised sex is wrong and exploitative. Men are sexually rapacious, visually stimulated and dangerous. Women who dress provocatively are more likely to be raped. Sex is a dangerous force that must be channelled through relationships. Women are, or should be, "modest". There are right and wrong ways to have sex. To be healthy is to be having the right amount of the right kind of sex with the right number of people, preferably one at a time. Porn is degrading. Children should, as long as possible, be kept innocent. Sex should be beautiful, spiritual and profound. There's too much sex on TV. Ban this filth.

Sex is dirty; save it for someone you love.

There you are: the myth of myths, the ur-myth, the underlying psychopathology that gives rise to all the things that Brooke Magnanti is complaining about. She thinks, or at least hopes, that the light of science can illuminate the dark recesses of the soul where lurk myths about sex. She imagines a world "in which reason and experience finally trump the playground demons of rumour and fear." She is calling for an end to ambivalence, for sex to be no longer a mystery. For people to believe what science rather than their own intuition tells them about the most intimate and troubling of human experiences. Dream on, Brooke, dream on.

*Brooke Magnanti informs me that she wasn't responsible for the title, nor for the strapline "Why everything we're told is wrong." I would have gone for "Sex, lies and the media", myself.