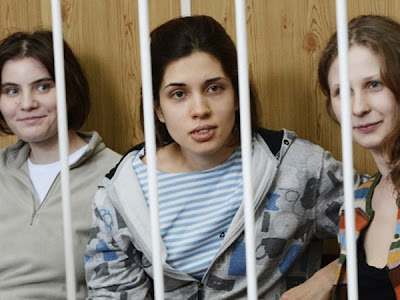 The three members of Russian girl-punk band Pussy Riot who laid on an impromptu and sacrilegious "prayer" in a Moscow Cathedral in February have been sentenced to two years imprisonment for hooliganism and religious hatred. While severe, this is less than the seven years they might have faced, and its relative leniency - at least by Russian standards - may represent a nod in the direction of international opinion, which has been firmly on their side, and almost unanimous in seeing the trial primarily as a manifestation of Vladimir Putin's authoritarian style of government.

The case has certainly attracted quite extraordinary international attention. That can't simply be because it gives serious news reporters and journalists the opportunity to say "pussy". The trial has been headline news throughout the world, gaining far more prominence than, for example, the execution in Texas of a mentally retarded man or either of our own recent "freedom of speech" cases, the Twitter Joke Trial and the trial of Simon Walsh for possession of "extreme pornography". Yes, there are attractive women involved, and yes it feeds into a narrative about the state of modern Russia. But above all it has provided an opportunity for western liberal self-congratulation: it allows us to tell ourselves that in our own land of liberty, democracy and the rule of law such a show trial could not have taken place.

Yet today's sentences, it might be thought, compare reasonably well with the 18 month sentence given to Cambridge student Charlie Gilmour for swinging from the Cenotaph during a protest in London in 2010, and is considerably less than the 4 year sentences handed down last year to Perry Sutcliffe-Keenan and Jordan Blackshaw, who had posted messages on Facebook that supposedly constituted incitement to riot - even though no riots in fact took place.

Nevertheless, while the savage sentences handed down to many people involved in last year's riots attracted a good deal of public support, today's sentence has been greeted as an outrage. The European Union, for example, has officially condemned the sentences as "disproportionate": no such statement was forthcoming from Brussels in response to the courts' response to last year's British riots. It's hard to spot any enthusiasm for today's verdict outside Russia, unless you count Christian Voice which put out a press release welcoming both the sentences and the decision of Moscow City Council to ban Gay Pride. ("I don’t pray to Mary, as it happens," said Stephen Green, "but I can recognise an assault on the Christian Faith when I see it.")

This may be because, in the West, protesting against Vladimir Putin is generally perceived as being a Good Thing and as a brave stand for the principle of free speech. Indeed, the assumption has been that the trial is, in itself, evidence that free speech is dying in Russia or has already died there. Knowing this, yet still protesting - and doing so in a dramatic, hard-to-ignore fashion - thus becomes a particularly noble action, even if it did cause genuine offence to many Orthodox Christians who have no stake in the Putin regime and perhaps no interest in politics.

Religion undoubtedly has something to do with it. The head of the Russian Orthodox Church, it has been claimed by the husband of one of the imprisoned women, personally contacted both Putin and the chief of the Moscow police to demand the arrest and prosecution of Pussy Riot, after seeing the footage of their protest on YouTube. He denounced the protest as "blasphemy" and called for severe penalties; his spokesman called it "demonic". If there is political manipulation behind the scenes of the trial (and there may well be) it is likely to be motivated as much by Putin's neo-Tsarist desire to pose as a champion of Orthodoxy as by his undoubted intolerance of dissent.

The religious angle has been strangely overlooked in Western reporting. Where it is discussed, it is usually in terms of the closeness of the Russian Orthodox hierarchy to the Putin regime rather than questions of sacrilege and blasphemy. The protest did not take place in a cathedral by accident, of course. The Cathedral of Christ the Saviour, demolished by Stalin and recently rebuilt (allegedly with help from the Russian mafia) is deeply symbolic both of the reemergence of Orthodoxy after the collapse of Soviet communism and of the unhealthy closeness between the church hierarchy and the Kremlin. The Pussy Riot "prayer" called upon the Virgin Mary to cleanse Russia of Putin, and the women in their statements to the court repeatedly criticised the links between Orthodox hierarchs and the government, especially the way in which Putin has used these religion for his own political benefit:


Our sudden musical appearance in the Cathedral of Christ the Savior with the song “Mother of God, Drive Putin Out” violated the integrity of the media image that the authorities had spent such a long time generating and maintaining, and revealed its falsity. In our performance we dared, without the Patriarch’s blessing, to unite the visual imagery of Orthodox culture with that of protest culture, thus suggesting that Orthodox culture belongs not only to the Russian Orthodox Church, the Patriarch, and Putin, but that it could also ally itself with civic rebellion and the spirit of protest in Russia.


No doubt Kirill's amour propre was damaged - the protest was aimed at him personally more than at religion - but this does not mean that there was no genuine offence to ordinary believers. Russian Orthodox churches are not, like some Anglican churches, simply buildings people go to pray in: they are more like temples, sacred spaces where heaven is believed to come down to earth. The Pussy Riot prayer was foul-mouthed (for example, replacing the words of the mass, "Holy, Holy, Holy" with "Shit, Shit, Shit") and, to a traditional religious sensibility, profoundly shocking. Without this profanation of the sacred, the patriarch might have been less outraged, and might therefore not felt compelled to call in political favours, and this trial might never have taken place.

When Peter Tatchell interrupted George Carey's sermon in Canterbury Cathedral in 1999, to protest the then archbishop's views on gay clergy (or something) he was arrested and charged under an obscure 1860 law. He was later fined the symbolic sum of £18.60. But then in secular Britain, a cathedral is far less sacred a place than the Cenotaph, and religious feelings count for less than property. Indeed, Pussy Riot have been supported by several prominent Anglicans, such as Giles Fraser or, on Thought for the Day this morning, Lucy Winkett. They have even been compared to Jesus, who "profaned" the Jerusalem Temple by overturning the tables of the moneychangers. Christ's complaint, though, was that the traders had turned a house of prayer into a "den of thieves". He didn't stride into the Holy of Holies and shout "Caesar is a cunt!" In any case, his punishment was rather more severe.
Email Post
Labels: Politics Pussy Riot Putin religion