The naked prince and the naked rambler

In Las Vegas, Prince Harry is photographed cavorting naked with a young woman (and no doubt other naked people too) during a drunken game of strip pool in a hotel room. In deference to palace sensibilities and post-Leveson fears, no British newspaper dares publish the photos or even put them on their website, though there can be few people who haven't seen them elsewhere. Not that many people would want to see them for themselves: we look at them because we want to have seen them, which is a different thing altogether. Meanwhile the Sun instructs its picture editor and a young female intern to get their kit off to recreate the scene, which reminds me of the time Rebekah Brooks ordered a reporter to dress up as Harry Potter.

Much hilarity ensued, but only a small amount of po-faced finger-wagging. If anything, by larking about in the altogether Harry was playing to his strengths. It's not as though he matters, after all. If William and Kate are blessed with children his constitutional irrelevance will be complete. And if a 28 year old man takes his clothes off in the company of other consenting adults, who cares?

It's only a naked body. We've all got one of those. If you're a distinguished actor you may well have displayed it to all the world in the name of art. This is the 21st century. 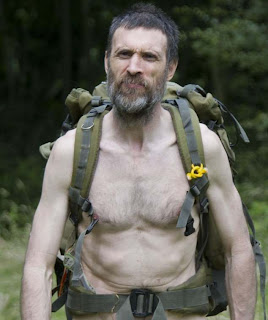 Meanwhile the "naked rambler" Stephen Gough was back in court again today. It didn't take long for him to be convicted, for the umpteenth time in Scotland, for breaching the peace by walking about in his preferred state of undress. Gough has spent most of the past six years in prison since making the mistake of bringing his naked frame north of the border, where a Presbyterian horror of the body lingers despite repeated SNP claims that Scotland is a mature, progressive democracy ready for full independence. His refusal to compromise his belief that it is his human right not to wear clothes has been matched by the Scottish judicial system's refusal to accommodate his eccentricity. Most of his time behind bars has been spent in solitary confinement.

A pattern became established over the years whereby Gough would be arrested, would be sent to prison for refusing to wear clothes, released for long enough to stride, naked, out of the prison gates and then promptly re-arrested and put back inside. After his most recent release he was allowed to go free. But his liberty was short-lived. A week later he was arrested once more, allegedly because he was walking in the vicinity of a playground, and promptly remanded in custody where he has remained ever since. Today the Kirkcaldy sheriff ordered psychiatric reports - perhaps believing that his unwillingness to wear clothes could only be explained as the result of a mental disorder - but told him that "in the absence of any good reason otherwise, you're going to end up serving prison sentence after prison sentence."

Because clearly the fact that six years in solitary confinement have in no way altered Gough's determination to walk around naked doesn't constitute a good enough reason for ignoring him and letting him go on his way.

Gough's case is simple: "there is nothing about me as a human being that is indecent or alarming or offensive." He poses no danger to society. He has never physically attacked anyone or interfered with property, nor has he used insulting language: his "crime" is to upset the sensibilities of prudes, of whom there are obviously a large number in Scotland. His continued detention spares the blushes of whatever members of the public would be offended by the sight of his nakedness. That is all.

Is nudity "indecent"? Only if you assume, as Anglo-Saxon prudes tend to do, that nudity implies sex. There are other reasons for being naked that have little to do with sex - taking part in a game of strip-billiards, for example - and, in Britain as a whole, laughter has largely replaced shock-horror as the default response to nudity. Perhaps the Scots are especially sensitive souls, though I find that difficult to believe. It's hard to escape the view that Gough's real crime is not so much outraging public decency as refusing to conform. Keeping him upholds the majesty of the law which Gough's defiance challenges, at a cost to the taxpayer of hundreds of thousands of pounds.

Considering the trivial nature of his "crime" - basically, being unconventional and stubborn - the severity, expense and sheer pointlessness of his punishment is a scandal. Yet unlike Pussy Riot, who whatever their credentials as political dissidents deliberately provoked religious indignation by performing a foul-mouthed parody hymn at the altar of Moscow's most prominent cathedral, his continuing punishment does not seem to be the occasion for international protest. The EU has not seen fit to condemn the indefinite imprisonment in solitary confinement of one of its citizens for no real crime. Hillary Clinton has made no statement on the case. Pussy Riot have Madonna and Paul McCartney to be outspoken in their support. Stephen Gough has... Sean Biggerstaff, an actor best known for his portrayal of a quidditch player in the first two Harry Potter films.
Email Post
Labels: Crime law royalty