Death of a Stalinist 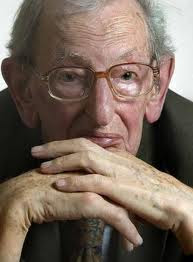 Last year I was at a function most of whose attendees were, I suppose, of the political Left. At one point a sudden hush descended and a whisper ran around the auditorium that Eric Hobsbawm was there.  A few seconds later the crowds parted reverently as the nonagenarian Marxist hobbled into view.  The atmosphere was not unlike how I imagine a Papal audience or a personal appearance by the Dalai Lama; it would scarcely have been more respectful had Nelson Mandela himself walked into the room.

Hobsbawm was an icon of the Left - and the Left loves its icons, the older and more doddery the better - and enough a member of the Establishment to have been made a Companion of Honour, a particularly swanky (and exclusive) decoration sometimes given to people who believe themselves too grand for mere knighthoods.  He was much spoken of, while alive and in frequently in his presence, as Britain's greatest living historian, as the most important historian of the 20th century, as the Left's foremost intellectual and as an all-round good egg.

His death today at the age of 95 has yielded similar encomia, not least in the Guardian.  He had  "a unique position in the country's intellectual life" wrote Martin Kettle; "one of a tiny handful of historians of any era to enjoy genuine national and world renown."  For Tristram Hunt, one could have no more generous, humane, rigorous, and involved a guide than Eric Hobsbawm".  He was "an Enlightenment giant whose passing marks a sad pulling away from the 20th century and all it entailed."  Hunt could be heard in equally misty-eyed form on Radio 4 this afternoon, waxing lyrical about Hobsbawm's encyclopaedic mind and love of jazz.

Missing from such tributes was much acknowledgement that Hobsbawm was an unrepentant communist who had in his youth had looked the other way as Stalin purged and murdered millions of his own people, who in middle age supported (albeit "with a heavy heart") the Soviet invasions of Hungary in 1956 and of Czechoslovakia in 1968, and who in old age preferred not to mention the show trials or the gulags.  He was quite happy to distort the facts.  The Soviet empire, he claimed incredibly in 1997,  "was maintained only a limited, even minimal use of armed coercion."

At least he was consistent.  "When the fact change", said John Maynard Keynes, "I change my mind."  Hobsbawm never recanted, even after it became impossible to deny that the Soviet Union was rotten and oppressive.  Right to the end, long after the collapse of the Berlin Wall, he seems to have regarded Communism as a noble experiment that had unaccountably failed to work.   In a 1994 TV interview he told the great Canadian liberal Michael Ignatieff that Stalin's murder of twelve million of his own people would have been justified had it ushered in the communist Utopia.  The conversation is worth quoting in some detail:

Ignatieff: In 1934, millions of people are dying in the Soviet experiment. If you had known that, would it have made a difference to you at that time? To your commitment? To being a Communist?

Hobsbawm: Because in a period in which, as you might imagine, mass murder and mass suffering are absolutely universal, the chance of a new world being born in great suffering would still have been worth backing... The sacrifices were enormous; they were excessive by almost any standard and excessively great. But I'm looking back at it now and I'm saying that because it turns out that the Soviet Union was not the beginning of the world revolution. Had it been, I'm not sure.

Ignatieff: What that comes down to is saying that had the radiant tomorrow actually been created, the loss of fifteen, twenty million people might have been justified?

For Hobsbawm, Stalin's crime was that he failed.  Perhaps it did not occur to him that if a revolution can only be brought about by mass murder there must be something fundamentally wrong with it.  The end justified the means, however terrible the means might be.   Michael Gove had it right in 2008: "When I think of the millions who were killed and tortured in Marxism’s name," he wrote in the Times, "from the Polish officers shot in Katyn forest to those brave dissidents who endured the gulag, I am convinced that only when Hobsbawm weeps hot tears for a life spent serving an ideology of wickedness will he ever be worth listening to."

It's puzzling that Hobsbawm can be described - even by ideological opponents such as Niall Ferguson - as one of the 20th century's greatest historians when he was so utterly and demonstrably wrong about the single most significant aspect of 20th century history.  I don't deny that he had many of the qualities of a great historian - intensive research, a sweeping view, a good prose style.  But he conspicuously lacked that indispensible quality of judgement for which none of the others can compensate. You read an historian, above all, to understand the past, to gain insight.  Reading Hobsbawm, one can perhaps gain an insight into how an intelligent observer might be taken in by Communism, but only by treating him as the unreliable narrator of his own history.

Writing in Prospect some years ago, Ian Buruma called Hobsbawm "a decent man who served a blood-soaked cause."  Blindness to communism's crimes or willingness to overlook them was, of course, a common failing among his contemporaries on the Left.  Idealism often and easily overcomes reality.  Stalin was in his way no less a monster than Hitler, yet his apologists have, again and again, been able to cloak themselves in a mantle of righteousness, to remain respected and even beloved.  Their hearts, it is assumed, were in the right place - an excuse never made for admirers of Hitler.  But Hobsbawm's case strikes me as especially troubling.   Naivety can scarcely serve as an excuse for an historian who possessed a legendary command of facts, a man who had what was recognised universally as a towering intellect.  His blindness can only have been wilful.  He used his powers for evil.  And history, long before he died, had already disproved him.
Email Post
Labels: books history Labour Politics