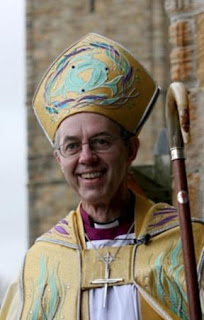 As Archbishop of Canterbury, Justin Welby will be called upon to preside with due solemnity over grand national events. This was one of the bits of the job that Rowan Williams did unambiguously well: coming from the Catholic side of the Anglican equation, he had an instinctive understanding of the more ceremonious aspects of religion. Welby by contrast seems to have an Evangelical's natural suspicion of ecclesiastical mummery. Indeed there are signs he struggles to take it seriously.

Speaking in Liverpool Cathedral in October last year, shortly before he left the deanery for the more exalted role of Bishop of Durham, he raised an eyebrow at the "very strange" investiture ceremony, which involved "judges in tights and wigs, and much proclamation, and a great deal of prorection." It was, he said, "like Gilbert and Sullivan". He went on to refer to clerics like himself as "strange men dressed in ornate curtain material"; although on this occasion he resembled nothing so much as "a middle aged, balding man looking like a tour guide.

He clearly has a sense of the ridiculous, though being quite so up-front about the absurdity of ecclesiatical garb surely runs the risk of letting daylight in on magic. Here he was on Maundy Thursday:


Oh, the trouble is I quite like all this episcopal bling. As long as I don’t see photos of myself of course. Then I see my ears stick out, and in a mitre, lacking Bishop's Michael’s stature, I slightly resemble a self‐propelled tulip. Only slightly. I hope.

There was an unfortunate incident in February last year when the then Dean of Liverpool corpsed during evensong. The Old Testament lesson, which it was his turn to read, was taken from Leviticus. It was a long passage enumerating various non-kosher animals,


And then suddenly something happened which I warmly advise you against. As I read, I could see in my mind's eye what this looked like to the casual visitors who were wandering in and out of the cathedral and stopping to observe the service, even in some cases to take part. Many of them were clearly foreigners, and they came into this extraordinary building and found a middle aged man reading about not eating rock badgers, various types of owl and reptile, and not even eating camels. And a statement that God really didn't like any of that. Moreover, this same middle aged man is wearing what to the initiated looked like a dressing gown and nightie, the wrong way with the nightie over the dressing gown. As I thought about it the absurdity struck me more and more forcefully and as I got to the three types of owl or vulture that you are not meant to eat, I began to laugh and was incapable of stopping myself. I could hear the choir stalls rattling as the men and and boys of the choir themselves collapsed in helpless laughter. Eventually I had to stop the lesson before it got to its end, gasp out "God doesn't like you eating any of these things," and stagger back to my seat.

So, if you want to knock the next Archbishop of Canterbury off his stride at some important moment (not that you would, of course), you know what to do. Just sidle up to him and whisper "rock badger" in his ear.

There's a good chance that Archbishop Welby will preside over the next coronation, a ceremony more ridiculously Ruritanian than anything he has yet had to face. Should be fun.
Email Post
Labels: barmy bishops Church of England religion