Tom Watson and child abuse: the return of the Paedoph Isles? 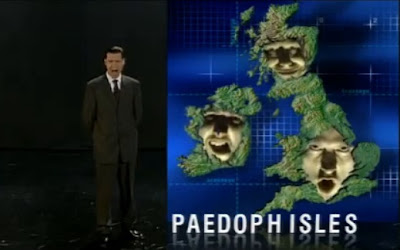 "Why is it that we can no longer think of the British Isles, without the word 'paedoph' in front of them?" - Chris Morris, Brass Eye

The scandals arising out of the revelations about Jimmy Savile are now well into their second month and getting frankly ridiculous.  On the day that Theresa May announced new inquiries into previous inquiries about a Welsh children's home that was the centre of an abuse scandal more than twenty years ago, the Sun speculated openly that Savile was not just a paedophile and/or necrophile but possibly a murderer as well.

After "exclusively" revealing that the Yorkshire Ripper, Peter Sutcliffe (whom Savile visited in Broadmoor, rather as the late Lord Longford used to visit Myra Hindley) had described some of the allegations against Savile as "a load of crap", the paper drew attention to the fact that one of Sutcliffe's victims was found murdered "yards" from the DJ's flat in Leeds.  They then spoke to two of Savile's victims, one of whom suggested that "the police now need to seriously investigate the possibility that Jimmy Savile was a child killer."  The other was "seriously wondering now if Savile could also have been a killer," on the grounds that "if he didn’t get what he wanted who’s to say he wouldn’t have killed to get it?" The Sun also roped in a forensic psychologist, Dr Ian Stephen, who said (or was induced to say) that Savile might have been capable of murder: "It is possible that he upped the game."

I suppose anything is possible.  He liked under-age girls, so why shouldn't he have been a serial killer as well?  But there are many people who lived in the vicinity of at least one of Sutcliffe's murders; and if the mere fact that Savile spoke to Sutcliffe in Broadmoor suggests that he was the Ripper's accomplice or fellow murderer, maybe we should start worrying about Lord Longford as well.  As for the comments by Savile's victims, it reads to me as though the Sun has been feeding them lines.  Savile's reputation is so thoroughly trashed (as it deserves to be, of course) that almost anything that can be said or believed about him, from necrophilia to murder.  The merest hint of an accusation is enough.  Evidence is not required, and anything that a victim, or an alleged victim, says will be automatically believed.

The same seems to be true about events in North Wales.  Ever since Tom Watson stood up in the House of Commons and spoke darkly about a "paedophile ring in Downing Street", implicating a senior political figure with a link to the Thatcher government, a torrent of claims and speculations has ensued.  This morning a former inmate of Bryn Estyn children's home in Wrexham went on Five Live to tell Nicky Campbell how abusers, including "two MPs, judges, senior serving police officers, market traders and business people from all over Britain" would select children to abuse at a nearby motel.  Their names were taken off statements given to the earlier inquiry presided over by Mr Justice Waterhouse, said Keith Gregory, adding for good measure that most of them were Freemasons.

Tom Watson's latest intervention in the House of Commons was almost as baroque.  He stressed, of course, that his concern was only for the victims, "thousands and thousands of children, whose lives have been ground into nothing, who prefer to kill themselves than carry on, who have nowhere to turn, to whom nobody listens, whom nobody helps."  But he seemed just a little too keen to rub the government's nose in it, suggesting that the type of inquiry now being set up - an inquiry into the actual allegations that have been made, that is, rather than a no-holds barred witch-hunt - would constitute the "basic building block of a cover-up" and be a" dereliction of the Home Secretary's duty".  He didn't abuse Parliamentary Privilege to name the Tory at the centre of the Wrexham allegations.  He did something possibly even worse, talking of "the spectre of a paedophile cabinet minster" that had apparently "transfixed" the media.

Let's just say that the name most often rumoured to be the Downing Street aide associated with Wrexham - which may turn out to be the wrong name, if it ever comes to be officially confirmed - is not and never was a cabinet minister.  So Watson is presumably alluding to other, even wilder rumours that have indeed been flying around the loopier corners of the Internet (the David Icke Forum, for example).

To what end?  Watson says that limiting the inquiries to North Wales and Savile "would guarantee that many sickening crimes will remain uninvestigated and some of the most despicable paedophiles will remain protected by the establishment that has shielded them for 30 years."  Which sounds fine and compassionate but in fact suggests that he is in the grip of a profoundly dangerous obsession.   The cases of Savile and the North Wales childrens' home are prominent because victims have come forward to tell their stories.  They have, in other words, some evidential basis that can be investigated.  Watson seems to want a virtually unlimited inquiry into alleged establishment paedophile networks that he has already decided must exist, and into a shadowy establishment cover-up that he is also presupposing.

If such an inquiry were to be set up, premised on the assumption of some vast paedophile conspiracy at the heart of the British state and establishment, who knows where it might lead.  The very fact that it had been established would give credence to what are, as yet, unsubstantiated and somewhat overwrought claims.  If it eventually concluded that there was no basis to the broader claims, this would itself be seen as evidence that the cover-up continued.  Alternatively, dozens or even hundreds of people might find themselves under police investigation or else be seen as guilty by association.  A broad-based inquiry process could well lead to a full-blown moral panic, as the battier claims of conspiracy theorists received a polite hearing from Lord Justice Cocklecarrot.

You may remember the Satanic Ritual Abuse panic of around twenty years ago.  In Rochdale and Orkney, families were broken up on the say-so of social workers advised by cultish self-appointed "experts".  Innocent people were convicted in what in retrospect seem like show-trials.  Meanwhile, respected media outlets gave air-time to claims of child-sacrifice and highly-placed Satanic networks.  Here we go again, it seems.  (One of the things David Icke's followers insist upon is that the establishment paedophiles are also Satanists, and quite possibly blood-drinking pan-dimensional lizards as well.)  On the pretext of listening to victims, the most bizarre claims and allegations will be treated as Gospel, and the net will be cast ever-wider.  With his "thousands and thousands" of victims of elite paedophile rings, Tom Watson is already sailing into deep Ickean waters, where Jimmy Savile and the Kray twins rub shoulders with Ted Heath and members of the royal family in a great big Satanist/secret service/necrophile vortex.

One Jimmy Savile is bad enough.  That he was able to get away for so long with a string sex offences against vulnerable girls is reason enough - and work enough - for an inquiry.  If serious, credible allegations have been made against a known, politically-prominent individual, then they too need to be investigated thoroughly.  But beyond that, what are most needed are caution and a sense of perspective.  Tom Watson, and his fellow Witch-Finders, have shown too little of either.
Email Post
Labels: children conspiracy theory Jimmy Savile moral panic Politics