Mantel on Kate: Mean but not meaningless

Thank goodness for the Daily Mail. I awoke this morning to outraged headlines about Hilary Mantel, who had apparently "launched a scathing attack" on Kate Middleton, Duchess of Cambridge, comparing her, among other things, to "a jointed doll on which rags were hung." The Mail had swiftly rounded up some people prepared to be outraged, including the boss of one of Kate's charities, in return for some free publicity. By lunchtime, David Cameron, far away in India, had "waded in", as they say, describing the comments (or at least the version of the comments that was put to him) as "completely misguided and completely wrong."

But the hive-mind of Twitter had been on the case long before, having come to the conclusion that this would be an excellent topic for today's ritual Mail-bashing. And I, meanwhile, had had a chance to look at what Mantel had actually written, and spoken, at length in the London Review of Books. Needless to say, this was no scathing attack on the former Miss Middleton. Rather, it was an discursive treatment of the public image of royal women, drawing on her extensive knowledge of history as well as a comparison between Kate and Diana. It offered some memorable vignettes, such as a function for writers at Buckingham Palace at which most of the guests tried desperately to avoid the embarrassment of having to talk to the Queen, while the servants failed to offer them a plate for used cocktail sticks. "The queen's revenge," thought Mantel, as though it were anything to do with her. There's a good line about Marie Antoinette: "one individual with limited power and influence, who focused the rays of misogyny." We also learn that a genetic condition may have been behind both Henry VIII's difficulty in fathering a healthy heir and the fact that in middle-age the once dashing monarch turned into a monster.

In discussing Kate, Mantel was talking less about the Duchess herself than about how she is fitted into media templates, "draped in a set of threadbare attributions", in the absence of any clearly-defined personality. She writes that Kate "appeared to have been designed by a committee and built by craftsmen." There is indeed something curiously identikit about her public persona: a perfectly pleasant young woman, much like perfectly pleasant young women are supposed to be, with nothing exceptional about her apart perhaps from an elevated ordinariness. Even the compliments offered by the people outraged in the Mail had a bland and formulaic air, as though in confirmation rather than refutation of Mantel's essay. To the prime minister she was "bright, engaging and a fantastic ambassador for Britain." The charity boss described her as "engaging, natural and genuinely interested"; she asked "really good questions, the questions of someone who wants to learn."

What was it that Mantel said? "Presumably Kate was designed to breed in some manners. She looks like a nicely brought up young lady, with ‘please’ and ‘thank you’ part of her vocabulary." In other words, "engaging".

The worst that can be said of Hilary Mantel is that she is as guilty of the same objectification of which she accuses the media. To her, Kate is not so much a clothes-horse or a walking womb as an illustration of the childishness and artificiality of public discourse around, and expectations of, royalty:


When her pregnancy became public she had been visiting her old school, and had picked up a hockey stick and run a few paces for the camera. BBC News devoted a discussion to whether a pregnant woman could safely put on a turn of speed while wearing high heels. It is sad to think that intelligent people could devote themselves to this topic with earnest furrowings of the brow, but that’s what discourse about royals comes to: a compulsion to comment, a discourse empty of content, mouthed rather than spoken. And in the same way one is compelled to look at them: to ask what they are made of, and is their substance the same as ours.

Which is true as far as it goes, but rather overlooks the fact that Kate herself is an entirely blameless woman, doing her best to make sense of her bizarre role in national life, "engaging" indeed, and that however bland her public persona may be she herself presumably has feelings: some of Mantel's comments seem gratuitously mean.

At the root of Mantel's problem with Kate is regret that she's not Diana. Nor is she Marie Antoinette or Anne Boleyn, both of whom, you won't need reminding, ended up losing their heads. Diana, of course, lost her own head in a more metaphorical but no less fatal manner. In comparison with such divas, Kate is too dull for this novelist's interest:


she appears precision-made, machine-made, so different from Diana whose human awkwardness and emotional incontinence showed in her every gesture. Diana was capable of transforming herself from galumphing schoolgirl to ice queen, from wraith to Amazon. Kate seems capable of going from perfect bride to perfect mother, with no messy deviation.

Diana was "fitted to be the carrier of myth," thinks Mantel: a character of archetypal power who brought with her the archaic numinousness of royalty. Kate, on the other hand, is fit to open supermarkets and carry an heir, but that's about it.

The same might be said of Henry VIII's third wife, Jane Seymour, a parallel that Mantel fails to draw explicitly, though she does mention her in passing in the second part of the essay:


No one understood what Henry saw in Jane, who was not pretty and not young. The imperial ambassador sneered that ‘no doubt she has a very fine enigme’: which is to say, secret part. We have arrived at the crux of the matter: a royal lady is a royal vagina. Along with the reverence and awe accorded to royal persons goes the conviction that the body of the monarch is public property. We are ready at any moment to rip away the veil of respect, and treat royal persons in an inhuman way, making them not more than us but less than us, not really human at all.

Which, it seems to me, is precisely what Hilary Mantel is doing to Kate. 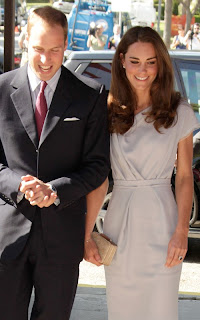 Kate's lack of a vibrant personality may be her greatest asset. She has something of the freshly-scrubbed quality of the earliest Diana. But Diana was a 19 year old virgin when she was thrust into the spotlight. When she finally married Prince William, Kate was a whole decade older. Yet she was almost equally devoid of a past. She had spent all that time (apart from a brief hiatus) first as Official Royal Girlfriend and then as Princess-in-Waiting. There were no previous long-term relationships to complicate the picture or pique tabloid interest. Though her face and figure were already world-famous, she was almost as blank a canvass as her deceased mother-in-law had once been when she stepped out of her wedding coach.

It must be said, though, that this is just as true of Prince William, who despite a lifetime in the public eye has accumulated no visible personality quirks, has provided no fodder for the tabloids, has had no other long-term girlfriends and hasn't even ever been drunk in public. If Kate is a "shop-window mannequin, with no personality of her own, entirely defined by what she wore" - well, so is the future king, though in his case the wardrobe is entirely functional and semiotic: well-cut suits, military uniforms, black tie, the fatigues he wears when flying his helicopter. If he is spared the constant scrutiny his wife attracts for her dress (and undress) it is at the price of having no real public image at all. He is a cipher.

He is not a cipher because of his sex or royal status. His father is not a cipher: he has a sharply defined persona, both comic and tragic, that had already assumed its well-known lineaments when he was the age that William is now. The eccentric opinions, the tortured public introspection, the seemingly interminable wait to "fulfil his destiny" as king. The British royal family is not short of cartoonish personalities. Think of Prince Philip, or Harry, or Princess Anne. Prince William alone has his grandmother's aloofness and unknowability, though not her aura of alien unapproachability. In Kate, he has found a consort as bland and self-effacing as himself. No doubt this is why they get on so well (c.f. Charles and Diana.)  They are walking, talking cake decorations, which makes them probably the perfect royal couple, in a world where the function of royalty is to smile, act pleasantly and to provide some nice pictures to look at.

Hilary wonders if monarchy is "a suitable institution for a grown-up nation." I don't know, either, not because I'm unsure about the monarchy (it's silly) but because I'm far from convinced that we live in a grown-up nation. Such is the infantilised nature of our public life that it has become the preserve of the blandly inoffensive. It used to be said, following Bagehot, that the purpose of monarchy was to be decorative and the purpose of politicians was to be utilitarian and "efficient". But in those days there were politicians like Disraeli, or later Churchill, personalities far more vivid and even "decorative" than any modern royal. David Cameron is to politics what Kate and William are to royalty. He too might have been precision-engineered on a production line, and his conception of his own role closely resembles that which he ascribed to the Duchess of Cambridge: as "an ambassador for Britain."
Email Post
Labels: books culture history royalty