Chris Rennard, to judge from the photographs, not exactly an oil painting (unless it's the one Dorian Gray kept in the attic, of course). He looks like a younger version of Eric Pickles. But perhaps I'm being unfair, and in person he's blisteringly charismatic, or at any rate able, like the famously ugly and famously popular with the laideez John Wilkes, to talk away his face in under twenty minutes. On the other hand, I may be being unfair to Mr Pickles. 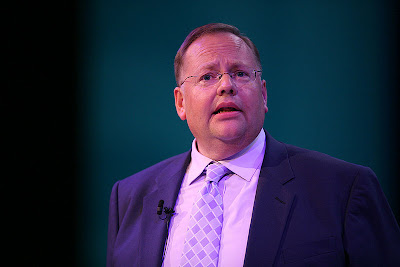 The precise number of women who claim to have been at the receiving end of Rennard's unwanted attentions (and of course he denies the allegations) is changing all the time. The figure of ten was quoted this lunchtime on Radio 4's World At One. The programme featured an extensive interview with one of them, so far known only as Susan, who described being propositioned rather clumsily by the peer at a training conference in Peterborough. He touched her leg and tried to invite himself up to her room.  That seems to have been about it. It was an unpleasant enough experience for someone who plainly didn't relish the attention, and one that, by her own account, left her a bit shaken.  Entirely unacceptable behaviour on his part, of course. Come the revolution, only attractive men will try to hit on women, and then only when they've already said yes.

Susan's main complaint seems to be that the man who tried to have his wicked way with her, even though he eventually took No for an answer, was also deeply involved in the selection of Lib Dem parliamentary candidates. She was worried that she could have "knocked my chances of any future success in the party by having said No."


Of course men do try it on, but this is a man with an almighty amount of power. At the time he held the purse-strings for any winnable seat, and he could choose which were the starred seats... So this was a man who could control your future, and if he said, "I'm not too sure about this candidate," people listened to him, and people still listen to him, because he has commanded a great deal of respect.

The implicit allegation here is that Rennard was using his position to operate a casting couch for would-be female MPs. Susan understood (though of course nothing of the kind was said) that had she agreed to sleep with his lordship it would increase her chances of getting on in the party, or alternatively that if she didn't sleep with him her career would be damaged. As yet there's no evidence whatever to justify this suspicion on her part. It's one thing to suggest that Rennard was a sex-pest (which of course he denies); quite another to claim that he was offering favours in return for sex. Establishing the truth of the claim would be difficult. It would, for example, involve asking women who have succeeded in being selected for winnable seats in the past decade or so whether they slept with Chris Rennard. I can't imagine many Lib Dems wanting to go there.

But who knows? There's a quote in the Mail from an anonymous "Lib Dem insider" who spoke to Jo Swinson, now Equalities Minister, as long ago as 2004. That was before Swinson, then just 24, was even an MP, though she was already a rising star in the party, famous among other things for wearing a pink T-shirt with the slogan "I am not a token woman". The source said: "Jo Swinson said to me that Rennard had an issue about women but you have to put up with it if you want to get on in the party." The following year she became the youngest MP in the House of Commons.

According to the Mail, Swinson stands "accused of assisting with a cover-up that rivals the Catholic Church’s approach to abuse allegations," which seems a bit OTT. Until now, Swinson has had impeccable feminist credentials, for example spearheading a drive to ban adverts featuring airbrushed models. But then, as I'm sure she realises, you don't get very far in feminism by being sisterly with other women.

Sex and power always make for an unstable mixture. It's easy to tell a story in terms of vulnerable young women being exploited by older, predatory males; and perhaps this narrative itself is part of the problem. To take one obvious example: it was so easy to fit the Bill Clinton/ Monica Lewinsky affair into that stereotype that even commentators disgusted by the President's behaviour ended up by pigeon-holing her as a bimbo. As a result, her subsequent life has been entirely defined by that one incident, or to be more precise by the fallout from it. If the story had never come out, who knows what might have become of her? She might even be a Democratic congresswoman by now, whatever helping hand Clinton gave her on the way up long ago outweighed by her own achievements and hard work.

As for Lord Rennard, I can't help wondering how he imagined that he could get away with his sleazy behaviour towards women over so many years. Unless, of course, his clumsy advances didn't always meet with such a negative response. Two aphorisms: "Politics is show business for ugly people" (variously attributed to Jay Leno and the political consultant Paul Begala, though it may well be older) and "Power is the greatest aphrodisiac" (Kissinger, supposedly). Little known outside the Lib Dems, inside the party Rennard had about him an almost shamanistic aura as a strategic mastermind and fixer, a man with a Midas touch when it came to the arcane art of fighting and winning by-elections. He was a party celebrity, who brought with him the buzz of potential power and personal success. It's not beyond the bounds of possibility that a few ambitious and impressionable women (the two categories are not mutually exclusive) were genuinely turned on by his wandering hands and quivering flesh.  Though it's important to stress that he denies the allegations.
Email Post
Labels: gender politics Lib Dems Politics