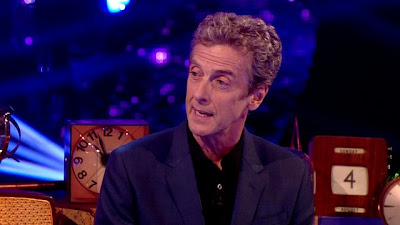 Is the choice of a middle-aged, heterosexual white man as the new Doctor Who actor legal under the 2010 Equality Act?

Peter Capaldi might be an excellent actor, he might be the best available actor for the job, and many might be pleased that the recent run of progressively younger Doctors has (for a while at least) been reversed.  It would be fun to see him swearing, Malcolm Tucker-style, at a Dalek.  But there are grounds for believing that his selection is a sin against diversity.  Capaldi will be the 12th in the official sequence of Doctors, the 13th if one includes Peter Cushing's portrayal in two 1960s film versions.  All have been male, white, British and, so far as one can tell, predominantly heterosexual.  (Russell T Davies gave David Tennant's Doctor some bicurious moments, but that's about it; not much to set against the parade of attractive young women that all the Doc's incarnations have invited aboard the Tardis.)

As a public body funded by the taxpayer (all right, the Licence Fee payer, if you're being pedantic, but the Licence Fee is legally classified as a tax) the BBC is subject to the Public Sector Equality Duty, which is set out in s149 of the 2010 Equality Act.  This provides that public authorities must, in the exercise of their functions, have due regard to three issues: eliminating discrimination, harassment and victimisation; advancing equality of opportunity (mainly by meeting the special needs of people with "protected characteristics" including race, gender, sexuality, religion or disability; and fostering good relations in society generally.

The choice of a specific actor in a long-running TV series probably doesn't, in itself, involve the PSED in all its box-ticking complexity.  After all, the race, gender and sexuality of most fictional characters are pretty well established.  Sir Arthur Conan Doyle created a male Sherlock Holmes, for example, so it would seem unreasonable to insist that women be considered for the part (although the updated American TV series Elementary introduced an interesting twist  with a female Dr Watson).  We expect TV to tackle issues of race, but casting can't always be colour-blind.  As for disability, Peter Cook and Dudley Moore said it all in the One Legged Tarzan sketch.

But Doctor Who is different, not least because the essence of the character is in its protean ability to regenerate.  Potentially, the Doctor might be anything: male, female, black, white, old, young, even (I suppose) something other than humanoid (why ever not?)  More to the point, whenever the role is up for renewal - at least in recent years - the possibility of a female Time Lord is canvassed and speculated on, not just be fans but by the writers and producers.  Current supremo Steven Moffat fuelled speculation at last year's Edinburgh Television Festival by saying that "It is a part of Time Lord lore that it can happen - a Time Lord could potentially turn into a woman. The more often it's talked about, the more likely it is to happen someday."  Nor is there any mythological objection to a black actor playing the role.  Indeed, Luther star Idris Elba was one of the most widely-tipped names this time around.

The fact that the Doctor might potentially be female or non-white could well be enough to give rise to Equality and Diversity issues.  Fulfilling the PSED, moreover, wouldn't simply be a matter of establishing that women and ethnic minority actors were given equal consideration in casting: the wider need to advance equality and "foster good relations" might be held to take precedence over the naive search for the best available actor or Moffat's ideas about story arcs.  At least since its reinvention in 2005 Doctor Who has come to have a remarkable (non-fans would say inexplicable) profile in modern British culture.  What is basically a light-hearted piece of family entertainment has come to be discussed and intensively analysed in terms of politics (including sexual politics), morality, social dynamics, even religion.  It's a medium with (many observers are convinced) a message.  The Doctor himself (for now) is a role model and a touchstone of decency; when he does something ethically dubious, or even debatable, the shock can be palpable.  Playing the Doctor is much more than just an acting job.

This being the case, is it acceptable for another white male actor to take the role?  Did the BBC even consider all these issues and carry out a full PSED assessment before deciding on Capaldi?

If the notion that the BBC might be legally obliged to choose a female Doctor (or at least be able to demonstrate that they considered the equality impact of their choice in rigorous detail) sounds a bit far-fetched, consider the recent fuss over the Winston Churchill fiver.  As everyone knows, campaigners led by Caroline Criado-Perez brought a heavy weight of public opinion to bear and eventually managed to embarrass the Bank of England into a rushed announcement that Jane Austen would feature on the next £10 note.  Less well known, but according to Criado-Perez crucial, was her invocation of the 2010 Equality Act.

In a series of letters to the Bank, Criado-Perez demanded to know whether the committee charged with banknote design had fulfilled the PSED when considering its choice of Churchill.  Her case was that the loss of a woman on the £5 note (the prison reformer Elizabeth Fry) would have a negative impact on equality.  In a piece written for the Guardian last month she accuses the bank of being "dismissive, patronising, and vague to the point of wilful obtuseness" and of failing to engage with her legal points.  Prior to the climbdown, she says, she was fully prepared to go to court over the issue.  Had she done so, and had the court judged that the PSED was engaged, the Bank would have been obliged to prove that it had undertaken a "rigorous" equality assessment before making its decision.

It's entirely possible that it never occurred to those responsible for banknote design that they might have duties under the Equality Act; that might explain the Bank's caginess.  After all, the design of a note doesn't directly affect anyone.  It's not as if only white men are allowed to spend money.  There's no evidence (that I'm aware of) that whether or not there is a woman on reverse side of the money causes any woman to do less well at school, earn less at work or lose self esteem.  Nor would a selection procedure based purely on historical merit feature more than a small minority of women.  For reasons of historic discrimination which saw women excluded from most professions and largely confined to the home, our culture and history has been made predominantly by men.  Male soldiers and politicians, male inventors and scientists, male philosophers and entrepreneurs.  White males, at that.  A smattering of women, yes (more as the 20th century got underway) but not enough to guarantee that one in four banknotes would always feature a woman.  Not if historical significance was the only criterion.

So if the PSED is to be applied to banknote design as well as to more obvious things such as recruitment or the offering of services to the public, the conclusion must be that public bodies have a duty to advance gender (and other forms of) equality in purely cultural or symbolic ways.  And the Bank of England appears to accept this.  Note the language of their official statement on July 24th:


In the light of recent concerns, and in order to ensure that our notes represent the full diversity of British people, the Bank has decided to review the approach to, and criteria for, selecting characters to appear on banknotes. The Bank’s Court of Directors discussed this at its meeting on 17 July, and agreed to the Bank’s plans to undertake a review.  The purpose of the review, which will be overseen by Chris Salmon, the Bank’s Executive Director for Banking Services and Chief Cashier, is to refine the criteria for character selection, and establish a process to ensure that potential candidates are consistently judged against those criteria.  In particular we will review:

a. The principles that guide the choice of historical characters, given the need for the choices to command respect and legitimacy.
b. How the process for choosing characters could ensure, and be seen to ensure, the delivery of those principles.

The Bank will also review whether it can take further steps to operate within the spirit of the Public Sector Equality Duty when deciding on future characters.

Is Doctor Who, perhaps the most talked-about British produced TV series and (16 year hiatus notwithstanding) the longest running, not a cultural product at least as significant as the design on banknotes - notes that, like the Doctor, are subject to periodic regeneration?  If the changing face of our money provides opportunities to make statements about the importance of fostering a diverse society, surely the changing body of Doctor Who does as well.  Not just an opportunity, indeed, but after the passage of the 2010 Equality Act, a positive duty.  Acting ability can no more be the only measure of suitability for the role of than Doctor than pure historical greatness can be be measure of worth to appear on banknotes.  Not any longer.  Having a white man continue to play the role in the future may not be legally an option.