Nobody really believes that Siobhain McDonagh acted alone. Indeed, her resignation on Saturday as a junior whip looks more and more like part of a concerted, if rather clumsy and possibly desperate, plan to make Gordon Brown's continued leadership unsustainable.

Yesterday's Telegraph, reporting McDonagh's resignation, carried an unattributed quote from "one former cabinet minister" suggesting that there was indeed a plot. "We had hoped that the Cabinet would reach the conclusion that it was time for Gordon to go but that doesn't look like happening now", said the disgruntled Anonymous. He(?) predicted a "series of mini volcanic outbursts" because "people have had enough". "It will destabilise Gordon and the government." 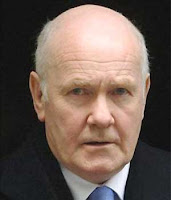 Is that a prediction or a threat? I guess the latter. My initial thought on reading the quote - "sounds like Charles Clarke" - was modified somewhat by the very next sentence, which referred to the close relationship between McDonagh and the former Home Secretary John Reid.

She certainly has very strong links to Reid: the Telegraph's Iain Martin wonders if it was "just a coincidence" that McDonagh was Reid's PPS for two years. Of course it wasn't: but did Reid actually put her up to it? It seems likely, especially given the glowing endorsement Martin gives Reid in the same piece. It is time for a "heavyweight intervention", he thinks: and who better than the Glaswegian tough to wield the knife?

Reid has apparently been telling anyone who'll listen ("I'm told", adds Martin) how he was "right about Gordon". He's officially stepping down at the next election to spend more time with Celtic, but "the way is still open for him to renounce that decision if he fancied a run for Labour leader". Martin then lists 5 reasons why Reid would be "attractive" to Labour. He is "untainted" by Brown. He's an effective operator who has a "very high" opinion of his own abilities. Younger candidates might not want to take the risk. He could play the class card against Cameron (this would be "very elegantly done"). Oh, and the public love him.

The Reid pitch, according to Iain Martin, would be "take a chance on a bolder and more iconoclastic choice which represents a complete break with Brown."

Hmm. It would appear that either Reid himself, or someone in a position to "know his mind", has been dripping something in the portals of Martin's ear. It has come to something when an ex Communist (albeit an arch-Blairite) starts using a Telegraph journalist to fly his balloon. At least Miliband stuck to the more conventional method of writing an article for the Guardian.

But I'm puzzled why Iain Martin's write-up is quite so glowing. Each of his five points invites a riposte. Here was a man who departed the Cabinet in a huff because he couldn't bear to take orders from Gordon Brown. He is incredibly arrogant, rude and bullying. He is hardly a fresh face. The "clunking fist" approach has been tried and found wanting. And would Middle England really warm to another Scottish prime minister? As for the "class card", this could be disastrous Reid. It might start reminding people of the Seventies.

What is it about "bruisers" that they get such great write-ups from journalists? Are they just good at intimidating the hacks? Obviously an effecient organisation needs its enforcers, but when the bully becomes the boss the result is usually a nightmare. The party would start pining for Gordon the way some of them are currently pining for Tony.

Martin also mentions that John Reid considered standing against Brown for the leadership last time, but decided not to. That's just what Labour needs, another ditherer. In any case, does anyone image that Gordon Brown would go out of his way to make life easy for his unwanted successor, especially if that successor turned out to be his sworn enemy?

The is going to be fun. Bloody, and terrible for the country, but fun. There's only one way out of this mess, and it isn't for Brown to resign and trigger a chaotic, holds-barred leadership election that would inevitably result in a victory for a stop-gap like Jack Straw. He should call an immediate general election.

I'm no expert on the intricate kin networks that permeate the Clannish world of Scottish Labour politics, but I note that David Cairns (whose possible resignation is being mooted today) was once an assistant to Siobain McDonagh. Indeed, she helped changed the law to allow him, as a former Catholic priest, to take a seat in Parliament.
Email Post
Labels: Gordon Brown Labour Politics

Anonymous said…
'Oh, and the public love him.'

And that, in a nutshell, is why newspapers are doing badly and bloggers like yourself are doing so well. Absurd. The average voter couldn't tell Reid from a King Edward spud in a suit.

Re: the 'bruiser' issue, perhaps leftish newspaper hacks live in a world of emasculating PC ninnydom, so that a whiff testosterone-fuelled aggression is a big turn on? It's so retro and wonderfully transgressive to want to punch someone up the bracket. And so much easier than having ideas, policies, and so on.
15 September 2008 at 16:47

Anonymous said…
God Preserve us from Reid and Straw. What have they got in common? A total inability to run a complex organization like the Home Office. Neither should ever be allowed anywhere near Downing Street.
16 September 2008 at 13:34