We know that Sarah Palin likes to project herself as a plain-speaking, no-nonsense, no-bullshit kind of a woman. But - as Boris Johnson knows only too well - plain speaking can be a dangerous thing in politics.

Remember Palin's best line from the other night:

I love those hockey moms. You know, they say the difference between a hockey mom and a pit bull? Lipstick.

It was off the cuff, we're told: an unscripted response to the loud cheer that greeted her repeat of her now legendary phrase of self-definition. It went down a storm in St Paul Minnesota. It's unlikely to have gone down quite so well in Alaska, though, where three weeks ago a six year old girl died after being savaged by the family's pit-bull terrier. Her father, who was serving in Iraq, returned home just in time to witness Isis Krieger's life support being turned off. As Anchorage Daily News reported, another child was bitten, though not fatally, in the same week. 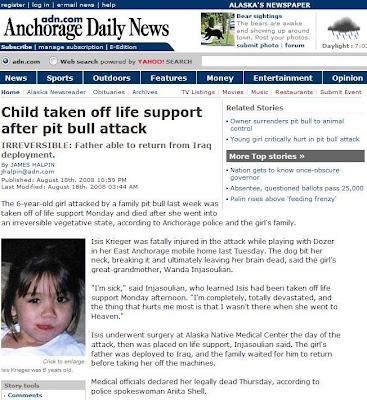 As the Mudflats blog comments, Alaska is the sort of place where not much happens, so it's unlikely that Sarah Palin was unaware of this tragic story. Equally, it's hard to imagine a British politician, under any circumstances, comparing themselves to a notoriously unpredictable breed of dog responsible for a high proportion of fatal attacks on people. But then there are no real controls on pit bulls in Alaska. ADN even quoted an animal control officer as saying that "Pit bulls can make wonderful pets" and that "They're no more likely to bite than many other dogs".

The trouble, though, is that apparently house-trained pit bulls can turn at any moment and go wild, attacking even those closest to them. They were bred that way. In this country, they are subject to the Dangerous Dogs Act, and even where legal have to be kept muzzled and firmly on the leash at all times. Perhaps the Republican party will have to introduce similar controls on Sarah Palin.
Email Post
Labels: Sarah Palin US election

jack ralph said…
"In this country, they have to be kept muzzled and firmly on the leash at all times."
I'm afraid not even that old chap
Pit-bulls (and others) are covered by the Dangerous Dogs Act: http://www.opsi.gov.uk/ACTS/acts1991/ukpga_19910065_en_1
which, as it came in more than 15years ago means there shouldn't be a single one left on these fair isles.
5 September 2008 at 13:18

Heresiarch said…
In theory, perhaps. But there are numerous loopholes, there's confusion about what a "pit bull" actually is and an exemption scheme allowing for individual dogs to be registered, microchipped and identified.


Girl, 6, attacked by pit bull dog
A six-year-old girl is recovering in hospital after being attacked by a pit bull terrier.

Tyla Cole was with her father, Marcus, when the dog turned on her at a friend's house in Norwich on Sunday.

Mr Cole, 34, of Cromer, Norfolk, managed to pull the animal off his daughter - but not before she suffered injuries to her back and thigh.

Police said: "Clearly this is a tragic accident which has resulted in a young girl receiving some nasty injuries."

"This is now a civil matter. No criminal offences have been committed," the spokesperson added.

Anonymous said…
"Perhaps the Republican party will have to introduce similar controls on Sarah Palin."

Heresiarch said…
From what I hear, she's now gone back to Alaska, officially to "deal with things". And to make absolutely sure she doesn't say anything else.
5 September 2008 at 17:28

Anonymous said…
Amazing that I should so heartily detest someone I didn't know existed a fortnight ago. Still, she's good value, in her way.
6 September 2008 at 09:03

Heresiarch said…
She is indeed. I haven't had this much fun since the Max Mosley business fizzled out.
6 September 2008 at 09:06