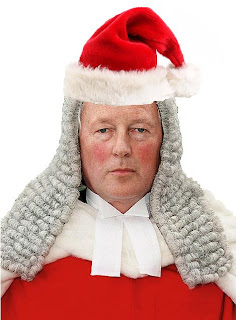 I missed the fact that Mr Justice Eady gave a major speech last week - to a conference organised by Justice - which touched on two areas for which he has been widely criticised: privacy, and libel tourism. According to the Guardian's report of the event, Eady is "hurt" by some of the personal abuse that has been directed his way by free-speech campaigners and newspaper editors (most notably, the Mail's Paul Dacre). But I've now read the speech (pdf), and he actually sounded quite bullish. It was, in part, a very modest summary of the way in which the law of privacy has developed in recent years (modest, because he scarcely mentioned the fact that he himself played the starring role in most of the big cases). But it also gave Sir David the opportunity for a little judicial gloating.

While the Mail's Supreme Editor devoted most of his speech last year to an onslaught on the judge, Eady couldn't quite bring himself to mention Dacre by name. He was merely "the man from the Daily Mail". But he could afford to be archly indulgent of the poor man's predicament - at the end of the day, Eady has the scarlet robe and the wig and Dacre doesn't. Or, translated into legalese:

The media have nowhere to vent their frustrations other than through personal abuse of the particular judge who happens to have made the decision. Certain individual judges, of course, have been singled out for the treatment – much to the innocent amusement of colleagues and friends. That is easier than going by way of appeal.

Dacre's personal attacks, Eady benignly noted, were merely a way of "letting off steam" that "did absolutely nothing to further the debate". As for the accusation that he was "unaccountable" - as he pointed out, that's really just another word for "independent".

Reviewing the cases - his cases, in the main - Eady suggested that the law of privacy was now more-or-less settled. The days of kiss-and-tell were over, as were those of intrusive paparazzi shots of celebrities sunbathing nude in their own gardens. He was prepared to concede that it might be "excessive to render unlawful (say) snapshots of a fully clothed actress strolling down the road for a new tube of sun lotion." But that was about as far as media freedom now went, Eady was pleased to note. He also hit back at Dacre's indignation, made more than a year ago, that Eady's "subjective and highly relativist moral sense" was preventing the tabloids from policing morality through the "public shaming" of errant celebrities:

Where the subject-matter is inherently private, such as sexual behaviour, it is not for judges to refuse a remedy on grounds of distaste or moral disapproval, or to accord protection on a graduated basis, according to how conventional or unconventional the sexual activity may be. This is quite a recent development. There is no logic to the stance taken a few years ago (in A v B Plc [2003] QB 195) that marital relations are entitled to greater privacy protection than a footballer’s one night stand.

Thanks to his good work on the bench, the kiss-and-tell days were over. "One person’s life story cannot be uninhibitedly told," he commented, "if it encroaches, to an unacceptable degree, on another person’s reasonable expectation of privacy." Tell that, one might think, to Tiger Woods.

Things now seem to be settling down remarkably quickly. One media commentator, at the beginning of the year, was already claiming that he had seen one Sunday tabloid “turning the corner” and “cleaning up its act”. He thought the editor showed signs (for whatever reason) of moving away from sleazy stories originating in the bedroom. Whether he is right or not we shall see. A similar conclusion was reached by the recent report published by the Reuters Institute for the Study of Journalism, based in Oxford. Its authors, Stephen Whittle and Glenda Cooper, decided that the only “chilling effect” had been upon those in the business of “kiss and tell”.

Eady approvingly quoted Whittle and Cooper's remark that "the courts [i.e. Eady] are making it clear that they require media responsibility... They should now be the place of last resort." He also noted that "there are now very few privacy cases being contested." Instead, in-house lawyers were advising newspapers not to push their luck whenever there's a prospect of an injunction. So thorough a job has he done, indeed, that he's more or less put himself out of business - journalists often don't even need to consult a lawyer to know that they can no longer get away with old-style exposés. "I see no evidence of a current storm," he declared, "let alone one of which I am at the centre." Game set and match to Mr Justice Eady.

Still, there's always libel. Here, Eady is undoubtedly at the centre of a current storm, one that shows no signs of abating unless and until Parliament finds time to intervene. The judge had a few things to say about libel tourism. He complained that there was a "large juggernaut of a campaign" based on the ridiculous notion that libel tourism is a "pressing problem which requires urgent attention". Au contraire. Libel tourism scarcely exists at all, he maintained. Eady and his fellow libel judges (a select, and virtually self-selecting, band) read about this alleged scandal in the papers, but "it is not a phenomenon that we actually come across in our daily lives". The notion that there is "a large queue of people, loosely classified as 'foreigners', waiting to clog up our courts with libel actions" is obviously untrue, he maintained. (One might almost call it bogus.) It 'ardly ever 'appens. One wonders what the Libel Reform campaign or the international press are making such a fuss about.

Of course, one reason why Eady doesn't see a large number of cases (he remarked, en passant, that there are only a handful of full jury libel trials every year) is that the burden on defendants is so great, and the costs so high, that most publications threatened with legal action back down and apologise. He didn't address the "chilling" effect of the law at all.

Eady put the unhappiness of Americans who find themselves being sued in London down to "long-standing cultural differences rather than mere backwardness on our part." In England, like most other jurisdictions, "truth and reputation" were at least as important as free speech, which was given "a particular degree of sanctification" in the Bill of Rights. He seems to regard belief in free expression as a purely American aberration. He also demanded know what evidence there was for the idea that the burden of proof in libel cases - placing the onus on the defendant to prove justification - encouraged jurisdiction shopping, given that other Commonwealth countries have similar rules. "If there is no such evidence, then there can be no reason to suppose that this pressing problem will be solved by reversing the burden of proof." He went on to speculate about the effect of any change in the law on journalistic standards of accuracy, before concluding that it probably wouldn't make much difference in practice anyway.

This is quite extraordinary:

How many libel actions turn upon the burden of proof? I have been trying to recall one and have drawn a blank. Perhaps some of you can give an example.

In perhaps his most striking passage, Eady contended that, where a serious allegation has been made, it should be up to the defence to prove it - otherwise juries unsure of the balance of evidence would be required to find claimants "guilty" of terrorism, or sex abuse or corruption. He even suggested that changing the burden of proof would fall foul of Article 6 of the European Convention, since it would deprive the plaintiff of a fair hearing before an unbiased tribunal. "It needs to be carefully considered whether a tribunal could be classified as unbiased if required by law to presume that you are guilty," he declared.

But it's not the plaintiff who's "on trial" here, but the defendant - who is presumably just as entitled to a fair hearing, even if with Eady on the bench they don't always get one. Criminal trials are a different matter entirely. As for allegations of corruption: one has to admire Eady's chutzpah here, given the fondness of seriously corrupt individuals - such as the Robert Maxwell, or others still alive who must remain nameless - for using our courts to suppress hostile comment in the press.

Anyway, that's Mr Justice Eady's side of the story - or, as he said in conclusion, "I just thought I would throw these random thoughts into the pot". On privacy, he carries all before him (at least when it's the privacy of celebrities or the rich and powerful that's at stake), reducing the likes of Paul Dacre to the status of malcontents cast aside by the onward march of history. And as for libel tourism, nothing to see here. He appears, in short, to inhabit a parallel universe. Otherwise known as the law.
Email Post
Labels: Eady J law libel privacy