Thanks for the lovely meal 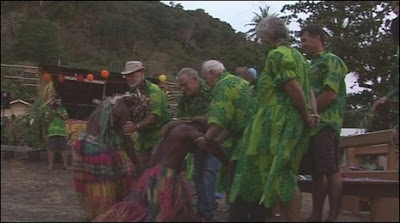 The trend for historical apologies, in which politicians get to display their moral worthiness by expressing regret for ancient wrongs that are in no sense their fault, seems to be spreading. The BBC reports that a tribe on the Pacific island of Erromango in Vanuatu have apologised to the descendants of an English missionary eaten by their forebears.

The Revd John Williams and his colleague John Harris were attempting to bring the benefits of the gospel to that obscure corner of the world 170 years ago. Instead, they ended up supplying the islanders with some much-needed protein. But now eighteen members of the missionary's family, including great-grandson Charles Milner-Williams, have travelled to the island to accept a humble apology. Islanders staged a re-enactment of the fatal events. Then, in a "sombre ceremony" described as "hugely moving", tribal elders "bowed before the visitors and grasped their hands, clearing their consciences of past deeds". They also "ceremonially handed" Mr Milner-Williams a seven year old girl. He "agreed to accept responsibility for her education".

So let me get this right - their ancestors murdered his ancestor, and as part of their apology he has to pay for the girl's schooling. And he has to travel all the way to the middle of nowhere - BBC film-crew in tow - to acknowledge their contrition. If they were really sorry, wouldn't they be paying for his children's education?

We're told that their ancestors' crime has weighed heavily on the islanders of Erromango. The Vanuatan president said that some of them felt under a "curse", while an MP and anthropologist, Ralph Regenvanu - who helped organise the ceremony - spoke of their "psychological guilt or complex" about the incident. However, he went on,

Reconciliation is very much part of our culture. Saying sorry is part of it but all reconciliation ceremonies require something from each side, there's always that element of exchange.

So it seems that, indeed, the apology isn't just the islanders' way of making amends. They really do expect something in return. And Mr Regenvanu himself was at pains to point out the positive aspects of cannibalism. He insisted that "contrary to what a lot of people think" it was "a very ritualistic and sacred practice". It was also seen as a way of "absorbing the power of an enemy." Quite an honour, really. As for the unfortunate missionaries, it was probably their fault for being white colonialists anyway: "John Williams may have been eaten because he represented this threat, this incursion of European civilisation that was coming into Erromango at that time."

Nothing much to apologise for, then. If anything, it should be the missionaries' descendants apologising to the islanders.
Email Post
Labels: anthropology