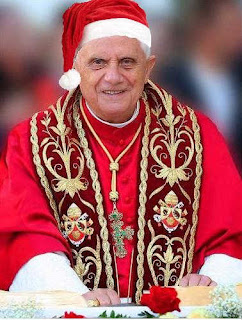 I was fascinated to learn (via Andrew Brown) that the Vatican has trademarked the Pope. They are apparently anxious "to protect the figure and personal identity of the Pope from the unauthorized use of his name and/or the papal coat of arms for ends and activities which have little or nothing to do with the Catholic Church." The announcement bans the unofficial "use of anything referring directly to the person or office of the Supreme Pontiff." They even want assert control over the adjective "Pontifical". Brown predicts that the move might backfire, with "a rash of deliberately mocking Pope figures all over the net, as people see a chance to cock a snook at him." I never needed such an excuse myself, but since it's Christmas, here's a totally unauthorised picture of His Heiliness in a rather fetching hat. Come on then Benedict, sue me.

Why this move now? The explanation, according to the press release, is that there has been "a great increase of affection and esteem for the person of the Holy Father in recent years" (funny, not quite the impression I get) and that this has led to widespread misuse of the papal image. Usually, of course, moves to register trademarks - of celebrities dead or alive, or of institutions like Oxford University - are part of an effort to maximise revenue by closing down sources of unauthorised memorabilia. I can imagine that such a manoeuvre, had it been available in the late middle ages, would have been invaluable in establishing which piece of the True Cross, Holy Foreskin or vial of Virgin's breast-milk was the real thing. 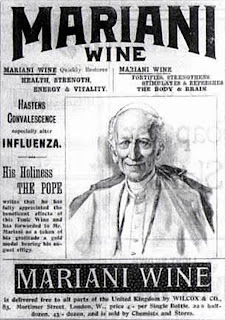 But what will Papa Ratzinger be lending his name to? Shoes? Sunglasses? Aftershave? There must be many companies wanting to play it safe after the Tiger Woods debacle. These days, though, it's usually only dubious miracles credited to would-be saints that get the papal endorsement. It wasn't always thus. Ratzo's 19th century predecessor, Leo XIII, allowed his name and image to adorn advertisements for Mariani's medicinal wine (special ingredient: cocaine). "His Holiness the Pope", ran the blurb, "has fully appreciated the beneficent effects of this tonic wine" - which "quickly restores health, strength, energy and vitality" - and has awarded the company "a gold medal bearing his august effigy" in token of his gratitude.

Leo lived to be 93, so it must have worked.
Email Post
Labels: catholicism Christmas law Pope religion