I notice that Johann Hari has been choosing his heroes of the year in The Independent. Among them is Evo Morales, president of Bolivia, who is, according to Johann, "an authentic democrat", one of two people (the other is the Afghan feminist Malalai Joya) who "embody what real democracy can mean".

When Evo Morales was a child, the indigenous peoples of Bolivia weren't even allowed to set foot in the capital's central square, which was reserved for white people. Today, he is the President, and for the first time in his country's history, he is diverting the billions raised from the country's natural resources away from the pockets of US corporations. It is building schools and hospitals for people who had nothing, and poverty is being eradicated in a stunning burst of progress.

That's one way of putting it. Another is that, like Venezuela's Hugo Chavez, Morales has embarked upon a programme towards almost unlimited socialist state control. He has already nationalised gas, oil, mining and telecommunications and begun Zimababwe-style land reforms. Other sectors of the economy, including electricity and the banks, are already being lined up. When one opposition leader spoke up against Morales, a mob of the president's supporters ransacked his house.

At the moment, Morales' policies, which involve vast redistributions of wealth, are genuinely popular in Bolivia. He has also become a hero-figure of the British left, perennially on the lookout for an anti-imperialist hero who can stick two fingers up to the United States. The Guardian loves him. Once Fidel Castro was their man (still is, in some cases); but then Cuba became a totalitarian nightmare, as such socialist experiments invariably do. Bolivia isn't a dictatorship yet, and may not be for many years. But democracy means more than representing the will of the majority. How will he act when his policies begin to fail? As it is, Morales' claim to be an "authentic democrat" is scarcely helped by some of his international contacts. 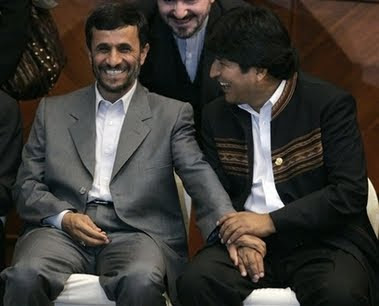 What Hari doesn't mention is that Evo is a particularly close friend of Iran's Mahmoud Ahmadinejad, as this picture demonstrates. Last month Ahmadinejad visited Bolivia as part of a South American tour. A large crowd assembled outside the presidential palace holding pictures of the Iranian vote-stealer, and the two leaders issued a joint statement declaring their shared anti-imperialist vision. When Morales won the Bolivian election earlier this month, Ahmadinejad sent him fulsome congratulations. The message declared that the victory "will strengthen friendly bonds between justice-seeking nations and promote equality, independence, freedom and kindness" and "will also remind arrogant systems about the fact that wise nations follow justice-based spirituality and that the future belongs to nations like ours".

As one might expect, Hari is no fan of Ahmadinejad. One might think that Morales' ongoing love-affair with the Iranian loon would give him at least some pause.
Email Post
Labels: Ahmadinejad Politics