Cherie and the Religious Jaw-breaker: the mystery deepens 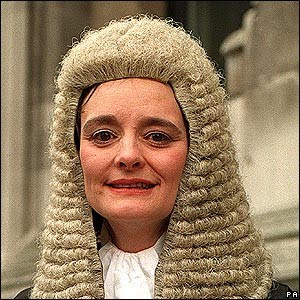 Leading legal blogger Jack of Kent, under his real name Allen Green, has a new column in The Lawyer magazine entitled Bad Law. It's supposed to be a kind of legal equivalent of Ben Goldacre's legendary Bad Science column - though, given the nature of the host publication, he's probably preaching to the converted.

For his first case he attempts to get to the bottom of that strange story about Cherie Blair and the cashpoint assailant she treated leniently on the grounds that he was "a religious person". Allegedly. The National Secular Society made a formal complaint about her apparent discrimination against the non-religious, while AC Grayling declared that she "has proved herself unfit for the bench". Mrs Blair's comments, as reported, seemed fairly damning. But the facts were rather starkly presented in the press reports and it was hard to determine what had actually taken place.

At least two telling facts emerge from Mr Green's somewhat long-winded analysis. First, the miscreant, "devout Muslim" Shamso Miah, did not receive an unduly lenient sentence. A six month suspended sentence is well within the current sentencing guidelines, especially when, as here, it is combined with a community service order. Miah was "just another first-time offender."

The second point is more surprising. Though he (like me) assumed that the fact of Miah's religious convictions must have been raised in mitigation by his lawyer, this does not seem to have been the case:

Although it cannot be ruled out that the role in religion in his life was mentioned by his lawyer in open court, I can confirm that it was not actually part of the mitigation pleaded on Mr Miah’s behalf.

The judge’s awareness of the defendant’s religious beliefs was probably derived from the (confidential) pre-sentence report or the facts of the case (he had been to a Mosque before the assault).

Cherie Booth mentioned Mr Miah’s religious beliefs in sentencing even though they had not actually been raised formally as a mitigating factor: she raised them on her own volition.

Curiouser and curiouser. The good news is that, in the words of Paul Kaufman, a partner at the law firm which represented Miah, "a defendant’s religious belief or membership of a religious group is not in itself of any relevance in mitigation." If it were, there would be grounds for concern that people unable to demonstrate religious commitment are being treated more harshly - if only be default - and thus being discriminated against by the courts. My assumption had been that Mrs Blair's remarks reflected a tacit acceptance in the criminal justice system that religion was evidence of good behaviour, and achieved notoriety merely because of who she is. Apparently not. Far from merely accepting the plea that had been offered in mitigation, she raised the issue of Miah's religion of her own initiative.

If this is true, then the NSS complaint about her begins to look more, not less, justified. It's possible that she has been misquoted - but, if so, why has no correction been forthcoming? The case generated headlines embarrassing both for her personally and for the criminal justice system, accused of being biased against the non-religious. Yet, to my knowledge, neither Mrs Blair nor the Ministry of Justice has said anything about it. The only reasonable conclusion is that she did indeed say the things that were attributed to her, namely:

(1) I am going to suspend this sentence for the period of two years based on the fact you are a religious person and have not been in trouble before.

(2) You are a religious man and you know this is not acceptable behaviour.

Kaufman comments that "a legitimate question is raised as to why the Judge should mention this issue unless she did believe it to be a relevant consideration." Indeed. It's not just a legitimate question, given the above facts it's a conundrum. Especially since (as Kaufman also notes) "there is a risk that any reference to religion when passing sentence will encourage people to claim they are 'religious' in the expectation that they may be dealt with more sympathetically."

Anyone who finds themselves up in front of Judge Cherie Booth QC may well find themselves undergoing a religious conversion as dramatic as that experienced by many parents looking to get their children into a good local school. They'd be crazy not to.
Email Post
Labels: Blair Crime law Politics religion