A sizeable crowd of pro-science and libel reform campaigners gathered outside the Royal Courts of Justice this morning to support Simon Singh as his celebrated defence against the British Chiropractic Association finally reached the Court of Appeal.

You won't, I hope, need reminding of how this bizarre case has progressed: Singh's article for the Guardian back in 2008 accu 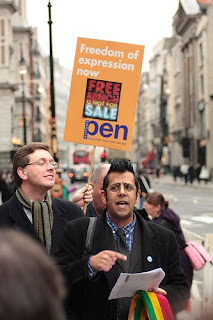 sing the BCA of "happily promoting bogus treatments" for which there was "not a jot of evidence". The BCA's decision to sue him personally for defamation. Mr Justice Eady's remarkable ruling which over-defined Simon's words to mean something that no sane person would ever imagine he intended. The "plethora" of evidence which the BCA produced to support the claims that their discipline could cure conditions - colic, asthma - which had nothing to do with the spine, and which lasted, under the full scrutiny of clued-up science bloggers, far less time than it had taken to assemble. The ongoing campaign for reform of the libel laws which Singh's case first coincided with, then propelled to the front of the political agenda.
Photo: Robert Sharp / English PEN More here.

I've not been there, and for most of the day there has been radio silence from the Strand where a super-charged panel of the Lord Chief Justice, the Master of the Rolls and Lord Justice Sedley was hearing the case. It's been both frustrating and suspenseful, like awaiting the result of a closely-fought election. In the last few minutes Jack of Kent's Twitter stream finally came to life. As expected, there will be no result today. But there are hints that it has been going Singh's way. The BCA were "given a deliciously hard time", apparently, with Lord Judge "baffled" that case has got this far and "surprised" that BCA didn't take right of reply offered to them by the Guardian. If they had the evidence, why didn't they just publish it? And this: "Take it as given :-) All here very cheerful."

There's bound to be something more substantial on his blog before this day is out. The hints so far, though, would suggest that the court has been concentrating on the merits of the BCA's case and the issues of public interest rather than the narrow semantic issues that weighed more heavily with Eady. If so the judgement could be one of far-reaching significance. It certainly represents a stunning turnaround, not just from last year's decision but from the initial approach to the Appeal Court, rebuffed by Lord Justice Keene on the basis that Eady's strange definition of the word bogus was "in accordance with authority".

"All three appeal judges very sharp on need for scientific debate and nature of scientific evidence," apparently. Maybe not super-sharp, however - at one point Sedley mistakenly referred to homeopathy, before blaming his lapse on the papers. That's interesting on several levels. First - he reads newspapers! Second, the question of scientific evidence and how it may impact on the claims made by alternative practitioners has obviously been weighing on his mind. That suggests he takes a broad view of the matter, even though all that homeopathy and chiropractic actually have in common is a big question mark hanging over their validity. Oh, and they both feature in Simon Singh and Edzard Ernst's book Trick or Treatment which you really should read if you haven't already done so.

A more succinct account of the days events was provided by Singh's comrade in arms Ben Goldacre, who Tweeted, "Early reports suggest 3 appeal court libel judges have taken a big shit on the face of the BCA".

This is not, as they say, the end, or even the beginning of the end. Whether Simon Singh wins his appeal or loses it, the case is bound to drag on. If he were to lose, then the Supreme Court or even Strasbourg surely beckons: the right of scientists and journalists to make robust criticisms of - I may as well say it - bogus claims is a vital one for a free society, one which Eady's narrowly legalistic approach completely overlooked. This is something that will have, if need be, to be decided at the highest level. Even if this evening's optimistic Tweets turn out to be justified, it could still prove a Pyrrhic victory. This being a case which turns on complex scientific data, there will be no jury, and Eady J is known not to take kindly to being swatted by the Court of Appeal. Can he be relied upon to decide the case objectively, taking full account of all the points about public interest or the meaning of particular words the higher judges might have chosen to make? I wouldn't bet on it. Seriously, I wouldn't. This may be just the first of several trips to the Court of Appeal.

Whatever happens in this case, though the campaign for libel reform is powering ahead. Around 35,000 have now signed the Libel Reform petition. More importantly, perhaps, the Commons Culture Select Committee is about to issue what may well be a far-reaching report into the whole area of privacy and libel. I shall devour it with interest. There now seems to be a general consensus, dissented from mainly by the fine folk at Carter-Ruck and Schillings (and their clients) that change is needed: above all lower costs, an end to "libel tourism" and the provision of a stronger public interest defence for matters scientific or health-related. Singh writes in today's Telegraph that he has "yet to meet a single MP who is not concerned about the state of our libel laws and how they hinder free speech and the fair discussion of ideas." But agreement that something should be done is a far cry from actually doing something legislatively. It may, for a while still, be left to the judges. At least they now appear to be taking their responsibilities, not just to the lawbook but to society as a whole, rather more seriously than hitherto.