Caroline Spelman: how she learned to stop worrying and love the burqa

Politicians say daft things all the time, of course. But when one comes out with something as superficially idiotic as Conservative minister Caroline Spelman's comments about the burqa conferring "dignity" on women - made in an interview with Adam Boulton - it's worth asking if she may have a hidden agenda. 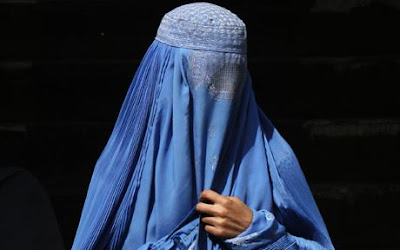 The inexorable spread through continental Europe of "ban the burqa" campaigns, and now legislation, has been greeted with bemusement and not a little smugness on this side of the channel. Thus Damian Green can dismiss the whole idea with a wave of the hand as "un-British", as though that were the end of the matter, and despite polls suggesting that a majority of the British people would actually support such a ban. Indeed, as the inimitable Leg-Iron points out, "banning random things with no real reason is now entirely British". Or as I put it back in January:

However much you or I may personally dislike these garments, it really is none of our business, nor the government's. But then increasingly many things that aren't or shouldn't be the government's business get done by the government in the name of the common good, or of equality, or to protect individuals from themselves. So it is at least interesting that leftish liberals who are so keen to intervene in other areas should be so convinced that it is wrong to intervene in this one.

At least for the time being, there's no prospect of anti-burqa laws coming here. As Damian Green also pointed out, with evident approval, we don't have a French-style secular state and do "have schools that are explicitly run by religions." His argument, based on the notion that Britain is (again, unlike France) "a tolerant and mutually respectful society" is still more-or-less the conventional wisdom - the only dissenters being, on the one hand (and paradoxically) UKIP and on the other Yasmin Alibhai-Brown. But tolerance does not imply endorsement, and it is still socially acceptable to qualify your support for the "right" of women to wear the burqa, if they so choose, by acknowledging that the garment (or the face-veil more generally) doesn't send out an altogether positive message about the status of women in society.

Not Ms Spelman. In her interview, she waltzed merrily over the line between supporting the right of women, however incomprehensibly from a secular Western perspective, to wear the burqa and positive enthusiasm for the thing itself:

Boulton: You don't see burqas as being repressive of women? You don't see a lot of men wearing them, do you? [Though to be fair, Adam, how would one know? They might all be men under there.]
Spelman: Indeed you don't. But I think it is quite interesting. I've been out to Afghanistan and I think I understand much better as a result of actually visiting why a lot of Muslim women want to wear the burqa. It is part of their culture, it is part of understanding that they choose to go out in the burqa...
Boulton: You really feel that? You don't think it's part of a manifestation of a culture that puts women in second place?
Spelman: For them the burqa confers dignity, it's their choice, they choose to go out in the burqa...

So much to say about this little exchange, which reveals Spelman to be, at the very least, profoundly deluded. I'll start by noting that she wouldn't be the first politician to have come back from Afghanistan with a thoroughly warped perspective, clad in the armour of supposed personal experience. Many who go there return convinced - or claiming to be convinced - that the Western military operation is somehow succeeding, for example, in bringing security and stable government to the country. I don't know who she's been speaking to, or how many of them were burqa-wearing women. I would be willing to bet, however, that she personally was not required (nor did she volunteer) to shroud herself in the imprisoning and dehumanising folds of a traditional, grille-fronted burqa of the sort that has long been shorthand for the oppression of Afghan women.

As indeed it should be. Imprisoned inside her mobile tent, the burqa-wearer must move through the world like a ghost, unable to express delight or sorrow, to join in the great play of life. It takes an unusually doltish spirit to detect anything "dignifying" in a garment that renders its wearer - as it is intended to do - an invisible object, a non-person, without the ability even to make eye-contact with another human being. It is indeed the most objectifying of costumes (the Bunny Girl has nothing on it) as can be established by observing how burqa-wearers are actually treated on Afghan streets by the men - not with respect, but with indifference or contempt. If a bundle of cloth does not look like a human being, after all, why should it be treated like one?

Does Caroline Spelman believe that women are generally treated with dignity and respect in Afghanistan? Does she think that the 87% illiteracy rate among that country's female population is proof that girls are held in high esteem by their families, or that the shockingly high number of child-marriages (routine in many provinces) and the domestic abuse that is so prevalent as to be almost de rigeur confer dignity on the women and young girls involved? Does she imagine that the penniless widows forced to beg or sell themselves for sex because the society allows them no scope for personal autonomy are better off because they're wearing burqas?

The honour killings, the mutilation and physical chastisement of females who dare to dissent from the patriarchal codes of honour that govern Afghan village life - perhaps they, too, are evidence of the great dignity of women in that land? Or does she imagine that being forced to go around shrouded from the world is somehow a compensation? That they may be unschooled, imprisoned sex-slaves treated in most cases as the personal property of their husbands or fathers, but at least (if they are allowed out at all) they don't have to show their faces. Perhaps it merely hasn't occurred to Ms Spelman that many Afghan women "choose" to wear the burqa because they know nothing else, or because they know that if they did not they face being spat at, ostracised, or having acid thrown in their faces.

But I doubt it. As I said at the start, there may be another explanation.

We are now well into the process of preparing psychologically for the coming withdrawal from Afghanistan. Western forces first entered the country in hot pursuit of Osama bin Laden and al-Qaeda - which has long since departed - but also promising to transform the prospects of the Afghan people, especially the women. Indeed, so closely linked in many American and European minds were the burqa and the wider oppression of women and girls that the garment's persistence despite the formal toppling of the Taliban has proved rather embarrassing. Various rationalisations for the perceived oddity - "it's their culture", "it confers dignity" - are often heard, because the obvious reason, that the condition of women has not, in fact, improved, is simply too hard to face.

For the Afghan government, whose survival depends on balancing Western financial and military backing with the support of warlords and tribal elders, it is very convenient to be able to tell visiting politicians that the burqa is nothing to worry about, just part of the national culture, all about conferring dignity, not compulsory at all. There's even a grain of truth in the argument. The burqa, in its origin (and it is little more than a hundred years old), was indeed about preserving dignity - just not the dignity of the individual woman. Rather, it marked the status of the woman's family (in other words, the men), demonstrating their ability to keep their women in a condition of perpetual dependence and childhood. In poorer areas, where women worked in the fields or in markets, burqas were impractical and unknown. That, though, was a long time ago. These days the women prevented from working by the cultural obligation of the burqa tend to be those least able to afford it. Its spread both reflects and has contributed to the economic and cultural collapse of Afghanistan during the past thirty years.

Belief in the cultural necessity of the burqa, as demonstrated by Caroline Spelman, is part of the slow withdrawal of Western engagement, both military and psychological, from Afghanistan. What is being prepared is the wholesale betrayal of Afghan women, their rights and whatever little progress they have made since 2001 to be surrendered as we begin to "talk to the Taliban" in the hope of expediting our departure. The departure is both necessary and right: Western intervention in the country has not succeeded and is now doomed. It is not our part of the world; and the fight has already cost more in lives and money than can be justified by American or British national interest. The war is now wending towards its inglorious close - at least, our war is: the civil war in Afghanistan may well take several decades more to play itself out. But the inevitability of Western departure does not make it easy, especially when it means leaving behind millions of women, still confined to their burqas, to the tender mercies of the Taliban or equally repressive tribal elders.

But if we can convince ourselves that they are wearing their burqas out of choice, because is their culture and is the source of their dignity, it becomes a whole lot easier to leave them to their fate.